“Thaththa, who is that bird”? my little daughter asked me during a visit to the Dalada Maligawa in Kandy a few months back. Perched on the roof of the security post at the entrance, the bird was preening itself making some refreshingly chirpy sounds. “It is a House Sparrow or a ge kurulla,” I said by way of introduction.

My daughter at age five, had already seen most of the common birds that visit our garden, but this was her first encounter with a House Sparrow. When I recall my childhood days, this bird would probably have been the first avian friend that I got to know as our ancestral house had a nest pot that was inhabited by a family of House Sparrows. They were uninhibited by our presence and would come down to pick small grains and particles of biscuits that we threw for them.

But those are by-gone days where most of the houses had special nest boxes or pots hanging on the wall inviting the sparrows to nest. The little bird was treated as a harbinger of good luck and the sparrows abandoning a house was considered a bad omen.

The house sparrow is strongly associated with human habitation, and can live in urban or rural settings. This bird sets a perfect example of a creature living in harmony with its surroundings. The House Sparrow got its scientific name in 1758 and is known as Passer domesticus. The name domesticus means ‘house’ in Latin to indicate that it is a bird commonly found in or around homes. The conditions around human habitations well suited them, so they thrived. House Sparrows mostly feed on seeds. In most situations, a great majority of their diet is weed and grass seeds or waste grain. During the breeding season, they catch insects as it is a good source of food to raise their hungry fledglings. 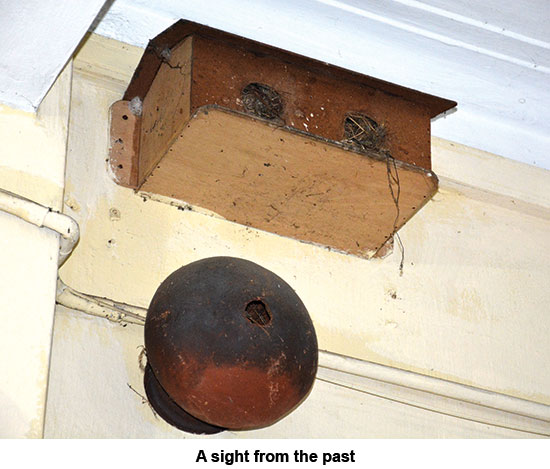 Noisy and gregarious, these cheerful exploiters of man’s wastefulness have managed to colonise most of the world. House Sparrows are native to Europe and Asia but had spread to many other regions such as America, Australia and Africa.

These tiny birds have a special place in people’s hearts. There is a day dedicated to celebrate the relationship between human and house sparrow. Since 2010, March 20th, is celebrated as ‘World Sparrow Day’ – perhaps the only day of the year that is dedicated to a bird.

But how did such a bird that once showed adaptability disappear from our neighbourhoods? The once common bird is becoming a rare sight especially in urban areas and experts have different theories for the decline in the House Sparrow population. They range from pollution to the loss of food sources. But it is largely believed that sparrows have failed to adapt to changing lifestyles and architectural evolution. Our farms are now full of agro-chemicals that poison the insects that sparrows used to feed on. With tile floors and brightly painted walls, people no longer have those inviting nest boxes fitted to their verandhas as they did in the past.

The decline in House Sparrow population is not restricted to Sri Lanka. Their decline has been recorded from every region in the world, but Europe had well documented this phenomena than other regions. London, for example has lost three-quarters of its sparrows or a drop by 71 per cent between 1977 and 2008 with substantial declines in both rural and urban populations, according to the Royal Society for the Protection of Birds (RSPB). 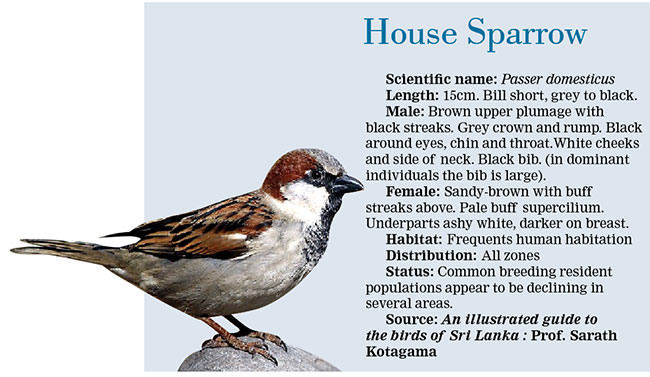 We mostly care about the conservation of endemic and other threatened species of birds, but as the example of the House Sparrow highlights, even many of our ‘common’ birds could be at grave risk. They are more prone to population declines that could bring catastrophic consequences for this species, according to well known Ornithologist and Environmentalist Prof. Sarath Kotagama. As an example he cites the case of the Passenger Pigeon. Once these pigeons flew over North America in their thousands, flocking together in huge numbers. It is said that the flocks of passenger pigeon blocked out the day time sky for hours, but the last member of the species died in 1914 officially making the species extinct.

The house sparrow can still be spotted in over two-thirds of the world’s land surface but reports from around the world show a rapid decline in the populations of these once abundant birds.

The writer is an IT Consultant, Envrionmental Journalist and a Naturalist