If tomorrow never comes – this win will remain forever

If tomorrow never comes – this win will remain forever

Statistics and history in the pre-Test cricket era say that with stalwarts in the calibre of D.L. de Saram, M. Sathasivam, Pat McCarthy – the first Sri Lankan to Sheffield Cricket in Western Australia, Stanley Jayasinghe – Leicestershire, Gamini Goonasena — Nottinghamshire and New South Wales, Clive Inman  — Leicestershire probably the first Sri Lankan to first class cricket, Michael Tissera – the First Ceylon Cricket captain to lead his country to a Test Cricket (unofficial) against a fully fledged Indian Test cricket in India, could have played first class cricket in country of their choice.  These cricketers were world class cricketers even at that time.

However this story is about one particular incident which was never to be repeated in the annals of our cricket.  That is — after gaining Test status and even winning the cricket’s World Cup, Sri Lanka has failed to beat India in India a Test match since.

The Cricket World Cup win in 1996 is considered the pinnacle of our game’s achievements while the 2014, ICC T-20 Championship win comes a close second. Yet, besides that, there has been other significant ground-breaking victories like the first Test win against India at the P. Saravanamuttu Stadium in 1985. This was followed by the maiden overseas wins against New Zealand, England, South Africa. The process reached a new high when Sri Lanka registered that epic three-nil victory against Australia in August followed by an invigorating Test series win over South Africa in South Africa thereafter.

Nevertheless all those accolades came our way after Sri Lanka gained full Test status in 1982.  Just imagine more than half century – I mean in years and not runs. There was our first major exploit in the game of cricket and the magic of it is since then we still have not managed to come up with the repeat performance.  In 1965, Michael Tissera and his band of fighters took the challenge to the Indian doorstep and beat the full-fledged Test team in an unofficial Test match and ironically since them none of the other Lankan teams has been able to beat India in a Test match in India. No wonder a Test series against India is termed as the last bastion in cricket.

The first Test as expected was an all Indian affair with centuries by Dilip Saradesai (126), and Hanumant Singh (149) and a near century by Abbas Ali Baig (96) helping India to amass a mammoth 508 for 4 declared.  Recapping the 1965 series with me, former Ceylon captain Michael Tissera explained, “we could not do much on that Bangalore wicket. The Indian bowlers were harsh on anything that we had to offer.” 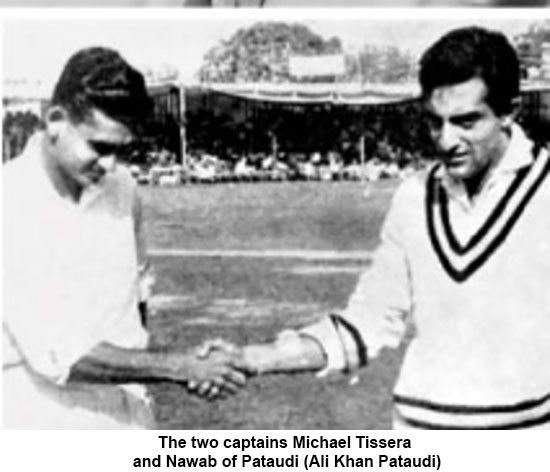 In reply the Lankans scored 205 and 257. The only half century for the game came off the bat of Jayasinghe who scored 63. Skipper Tissera (44) helped Jayasinghe put on 72 runs for the 4th wicket in the second inning.

The Ceylonese team on its part was determined. Jayasinghe, besides being a senior member of the team, was reporting the series to the Observer. He penned, “If Ceylon were to beat India in the second Test at Hyderabad, five senior cricketers of the Ceylon team have promised to contribute Rs. 300 to hold a celebration dinner at the conclusion of the tour”.  The wicket was devoid of life and bounce, on the Hyderabad wicket and Indians once again topped the five hundred mark with Jaisimha (131 ) and Chandu Borde (138) helping them finish at 505 for 6 declared. Ceylon replied in the first innings with T.C.T. Edwards (53) and Jayasinghe (78) top scoring to reach a final tally of 280 all out. Following on centuries by Jayasinghe (135) and Tissera (122) saw Ceylon score 378 runs in the second inning.

Then India had a task of scoring 154 to win in 143 minutes of batting. Wicket keeper Farooq Engineer stuck to the task; he scored 102 not out and India won the match by seven wickets. Tissera explained, “Had we batted for another 10-15 minutes we could have forced a draw. But, we were not lucky to salvage a draw. But, this gave us enough courage and we felt that we were ready to take on the Indians in the third unofficial Test match.”  Though the spirits of the Ceylonese cricketers were high, the Ahmadabad skies decided to cry on the first day and it rained. Then opening batsman Edwards who was hit near the eye during the last Test was on the injured list and was out of contention.

The first day of the game was a washout. Then the first two sessions of the second day were also unplayable. But, during the second session, the skies cleared out and there was a full house awaiting the game to get underway. “There was saw-dust covering more than half the ground and a captain of today wouldn’t even have considered walking on to the middle for inspection. Yet, when Pataudi suggested that we should get the game underway, we agreed,” Tissera said.

India won the toss and decided to bat. Ceylonese seamer Norton Frederick had the Indian in a spot and the second day ended at 51 for 3. Frederick finished the day with figures of 11-4-30-3.

After Frederick had got the initial break through, Stanley Jayasinghe took charge of the proceedings with his off spinners. The two bowlers shared the ten wickets with Frederick bagging 4 for 85 and Jayasinghe finished with figures that read 17.4-6-38-6. India were all out for 189. With Edwards injured, off spinner Abu Fuard wore a different hat in this game.  Fuard who generally batted in the lower middle order padded up to open the batting but, soon were in trouble against little known Umesh Kulkarni who bowled left arm seamers and bagged three early wickets and Ceylon were struggling at 25 for 5.

Tissera scored 28 runs to bring some sanity to the madness during the pre-tea session. But it was the batting of H.I.K. Fernando (28 not out) and Anuruddha Polonnowita (53) and their seventh wicket stand of 87 runs which brought the Ceylonese score to a fighting 144 for 7 at close of play. With the game meandering to a rain affected draw, the Ceylonese hub decided to think out-of-the-box. Though still 45 runs behind the Indian total they decided to put the Indians to bat the next morning.  “We did not want the Indians to know that they had to bat at day-break. We even got the overnight batsmen to pad up and warm up in the morning, but at the last minute I walked up and told them to come out and bat.

“That took them by surprise. We wanted to make the full use of the morning dew.” Tissera added.

The Ceylonese ploy worked. Frederick bagged two wickets and Lieversz bagged the other and the Indians were three for four. And they never recovered from that shock. Then the two spinners – Jayasinghe and Polonnowita bagged three wickets each in quick session and the Indians were bowled out for a surprising total of 66.  With 115 runs to win the openers Mano Ponniah (22) and Abu Fuard (40) did a good job by putting on a 41 run opening stand.

But, soon wickets began to tumble around Tissera. Then Tissera drove spinner Goel for four to bring home Sri Lanka’s first overseas victory and the first and only win against India up to a reality.  Half a century hence, still the challenge looms the same. Now Sri Lanka is a senior partner in the ICC mix. But, still we have to conquer the challenge of beating India and Australia in a Test match on their soil.

The writer is an award-winning senior Sports Journalist who had served  several leading Sri Lankan national newspapers as a Sports Editor and is presently with the National Olympic Committee , Sri Lanka