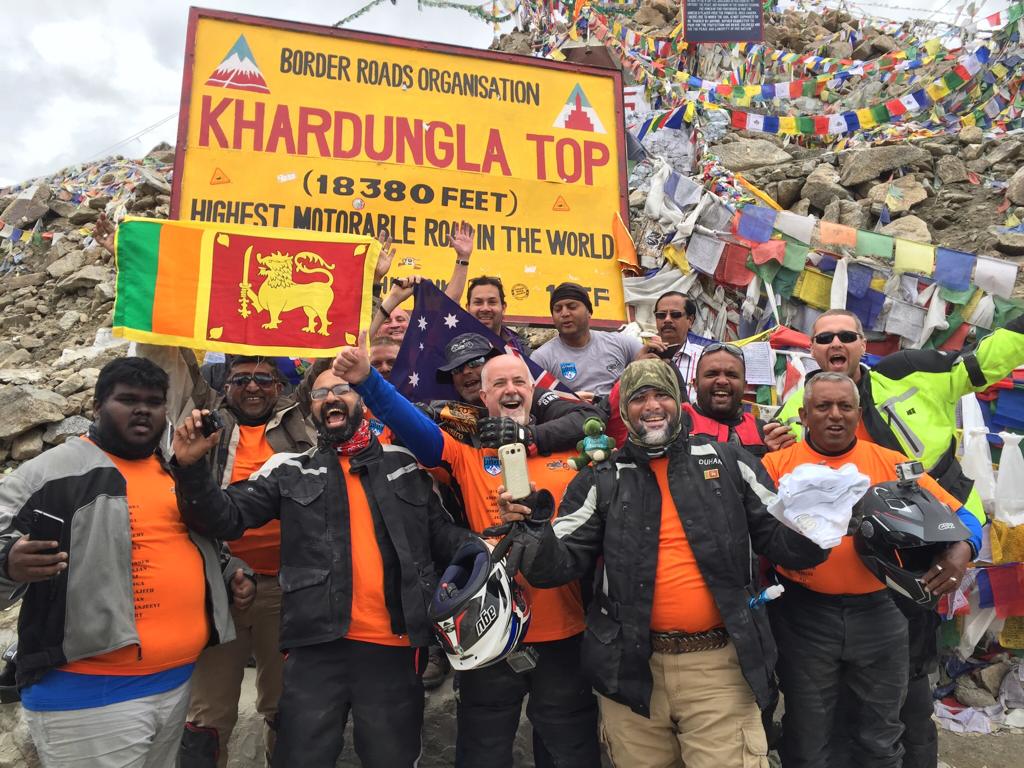 In the second edition of the series From the eyes of an Ex-Pat, Tanya Warnakulasuriya features Gordon Kenny, one of the pioneer ex-pats who helped build Sri Lanka’s flourishing garment industry. Kenny who made Sri Lanka his home for over fifteen years, recollects- “the moment I landed in Sri Lanka it just felt right. The people felt right, the happiness was there.”

With a father in the army, travel was in his destiny. Gordon’s family moved to army bases throughout Britain and beyond including a two-year stay in Cyprus.

Attributing his productivity to both his parents, Gordon epitomises the famous Scottish work ethic of hard ‘toil, thrift, and education.’

“As a kid I always wanted to be doing something. Since the age of ten, I was doing odd-jobs, gardening, and cleaning windows. I did whatever I could to earn a bit of money.”

This work drive resulted in Gordon acquiring his first house at seventeen.  As a minor he was not legally eligible for a bank mortgage. His father guaranteed a bank loan for him with a stern warning to his son to be sure that he would make the repayment.

“His words have rung in my ears my whole life,” Gordon recollects. “But I think he was proud. I lived in it and worked on the house by myself at weekends and nights, for two years, learning as I went. Then, I sold it and with the profits bought two more houses.”

Having left school at sixteen, Gordon would have probably been one of the youngest property owners in Britain.

“The textile factory was my second job.  The first was in an abattoir, and I lasted about an hour!” he laughs.

From an apprentice work-study engineer, Gordon rose to the rank of production manager within five years, at his first factory.  Later, at textile giant Courthaulds, he further developed his career, gaining experience in all areas of garment manufacturing. This fifteen-year career development took him around Britain, and then further afield to Morocco, Egypt and ultimately Sri Lanka. 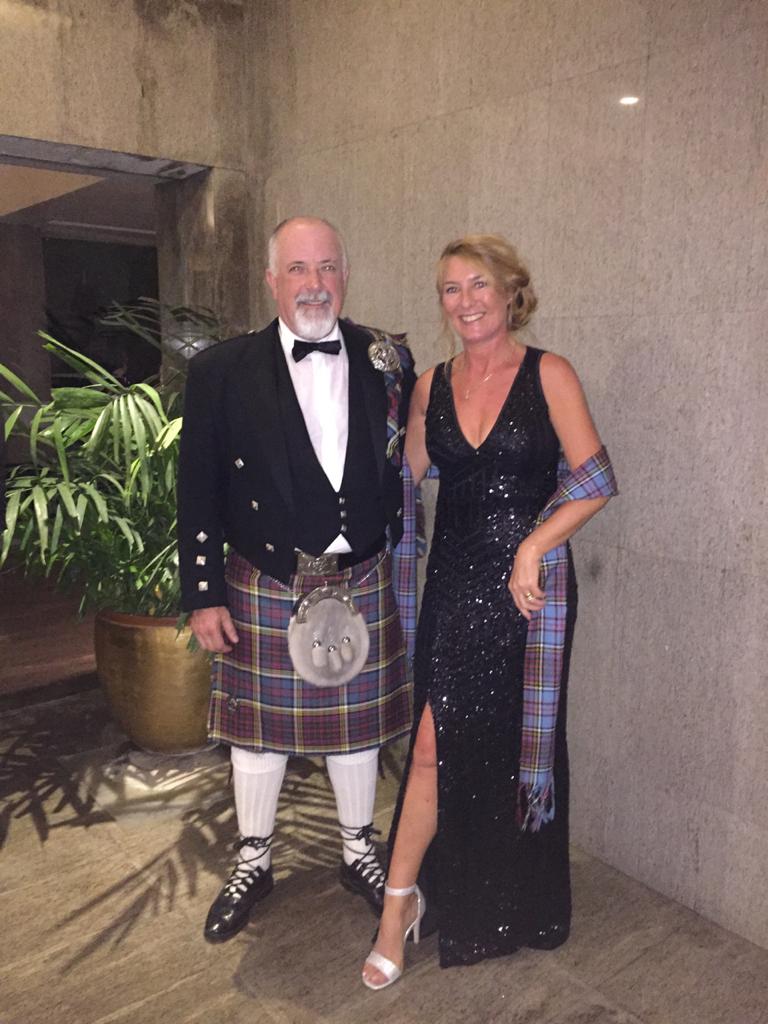 The Caledonian Chieftain with his wife Michelle

“Morocco was my first taste of working off-shore and experiencing a different working culture. After setting up the operation, I turned down the offer to run the factory because it didn’t feel like a good fit for me or my family.”

When the company set up, Courthaulds Clothing International and built their first factory in Sri Lanka, they asked Gordon to run the operation.

“I flew to Sri Lanka in July 94, visiting the Slimline factory in Pannala and meeting key people.  The moment I landed in Sri Lanka it just felt right. The people felt right, the happiness was there.”

Despite the longer work week in Sri Lanka (55.5 hrs) compared to the UK (37hrs), the idea of setting up a new operation was exciting, recollects Gordon.

“I would get off a plane and go straight to the factory.  Earlier in my UK career I had to close factories, which was very demoralising. Here, we were creating jobs and developing people, so it was a happy time.”

To Gordon, the contribution of expat managers to Sri Lanka’s garment sector was clear. “I had years of UK industry experience to offer local teams. We were there to transfer knowledge and advice on how to set up processes. It’s not that I was cleverer, it’s just that I had the knowledge, and they didn’t yet, because it was a totally new industry. It was our job to teach them.”

He recalls being taken to a separate canteen for expat workers on early visits. He asked for these areas to be removed declaring that if foreigners had a problem with local cuisine and culinary habits, they should not be working there.

“People are people. No matter where you go, we all have commonalities. Links like food help to engage with people.  I love Sri Lankan food, so I’d be happy in the canteen, eating with my fingers. That’s the local tradition and I respect it. I am not going to sit in my office and order a pizza.”

He also used language to connect, by learning a few phrases and even by-hearting the Sri Lankan national anthem.

“It’s nice to show people that you can speak even a bit of their language. Singing the anthem shows respect and solidarity for the culture.  We played it at the factory every morning, so I heard it every day.”

From the earliest days at Courthaulds to his time as Manufacturing Director at MAS’ Linea Aqua, Gordon’s commitment to appreciating staff has been clear.  Introducing initiatives like the Star Gift Awards and presenting roses to female machinists on Valentine’s Day, were ways of recognising staff efforts.

Gordon reflected on how well his family adapted to tropical living.

“Connor was four and Siobhan was eight when they came to Sri Lanka. Both did very well from their education in Sri Lanka and are worldly-wise. Connor did all his schooling there, including his university.  The fact that the family also wanted to return during my second term of working for MAS, is a compliment to Sri Lankan living.”

Living and working in Sri Lanka during the civil war, Gordon recalls his daily trip to the factories along the old Negombo Road,

“I’d always be desperate to get home before children went to bed, but would always be stopped at one particular check-point.  Finally, I lost patience and asked why they always stopped me despite seeing me and my car twice daily every day.  Then, my driver explained that they were only stopping us to practice their English!  I felt so bad! After that, I’d always wave and have a chat.”

He remembered how tough it was working in Minuwangoda, knowing that wife Michelle and the children were out and about in Colombo.

“There was always a good network of local information and communication. People would pass on alerts they heard from their sources. On more than one occasion I would be told to ensure the family stayed at home or to stay away from certain areas.” 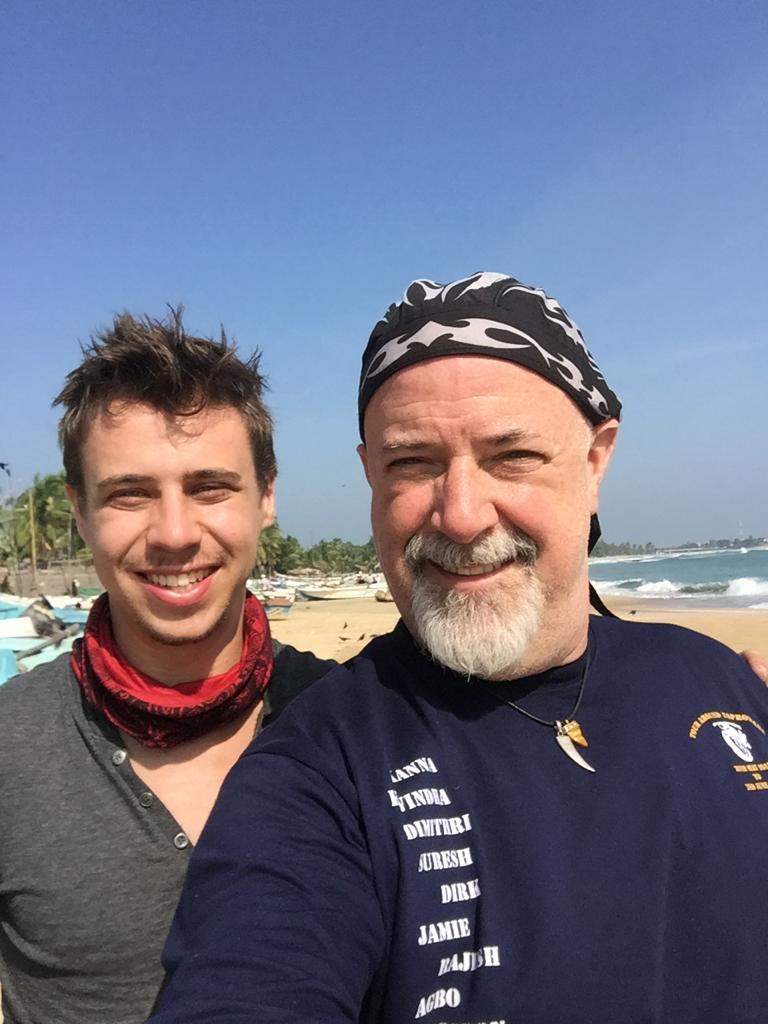 Across the world, Caledonian Societies, celebrate Scottish traditions and key dates in Scotland’s calendar. As Chieftain of the Sri Lankan Chapter for over seven years Gordon believes that traditions are important.

“You become more patriotic the further away from home you are. I loved the profile of the Caledonian Society and creating events that generated money for needy causes. Also, by bringing young Scottish musicians from the Dollar Academy, we’d give people in Scotland a connection with Sri Lanka which is still promoted today.  Beyond that there’s the historical relationship between Sri Lanka and Scotland. Tea estates like St. Andrews, Moray and Melrose are all named after places in Scotland. The father of Ceylon Tea, James Taylor and Tommy Lipton are both Scots.”

Gordon was also part of a Sri Lankan biker gang that circumnavigated the island twice and rode to the Himalayas. He blames his flirtation with motorcycling on a mid life crisis!

“Given the wonderful weather, what better place to do it?  I was a founding member of the Royal Enfield Riders Club and a breakaway club called BOBS (Brothers on Bikes). Thanks to BOBS I saw parts of the country that I would never attempt on my own, because you know you have their support on a ride.  With them, I’ve biked through Wilpattu, Sinharaja  and Dahaata Wanguwa (18-bend road).  Sri Lanka by bike is stunning. You see, hear, and smell so much more than you would in a car.  We circumnavigated the island twice, which was great training for our eventual ride through the Himalayas, where we reached Khardung La Pass – the highest motorable road in the world – just higher than Everest’s Base Camp at 18,380 ft.”

Finishing his last consultancy due to COVID, Gordon is now back in the village where he grew up and bought his first house. His international adventure has come full circle. His home in Larkhall is a testament to his former tropical home. From the artwork on his walls to his dining table and even the paving stones in his garden, Sri Lanka is everywhere. He even flew his dog Kalu to Scotland. Was there anything he still missed, I wondered…

“The food! The whole family misses Sri Lankan food and Lion Lager. I was never a Lager drinker until I went to Sri Lanka. We love it so much that we sourced some for my daughter Siobhan’s wedding reception this year as our remembrance of Sri Lanka.  I also miss the banter and the connection I had with so many people there.”

Dengue, traffic and the long work hours of course he was happy to leave behind!

Gordon’s final words to Sri Lankan friends, colleagues, and the country in general conveyed his long love-affair with the island.

“Bohoma istuti.  (Thank you very much) I’ve lived and worked In Sri Lanka for over 15 years, so I guess its Ayubowan  (May you live longer) ….…. until next time.”

Tanya Warnakulasuriya is a freelance writer and Media and Communications Specialist with over 20 years of experience in the international news industry. She is the former Head of Arts for the British Council and a Fellow of the Royal Society of Arts (RSA).