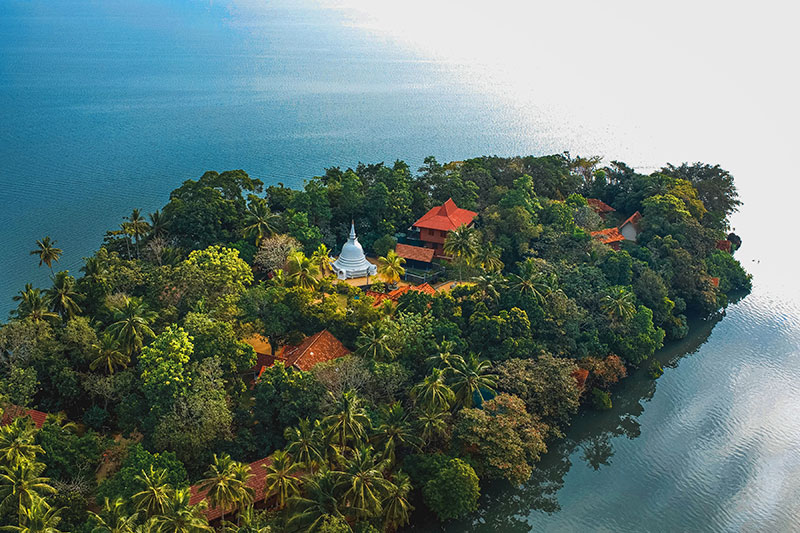 The small a coastal town of Koggala was put on the literary map of Sri Lanka by one of the country’s most well-known writers Martin Wickramasinghe. His books describe in details the people and places of this town and the Hirugal Devalaya, a temple dedicated to sun worship which later became the Devagiri Viharaya figures in some of his writings. Travellers along Galle Road passing the town of Koggala will not miss this landmark temple as its chaitya stands atop a small rock making it visible from a distance.

The Chief Incumbent of Devagiri Viharaya Venerable Koggala Wimalakitthi Thera said that long before the Buddhist temple was built at the site, it had been an ancient place of worship but most of its remnants are no longer there.

“As this was known as a place for sun worship, a massive sun had been curved on the rock stone and people who believed in such pagan forms of worships had prayed here,” he said.

It was around the 18th century that the Devagiri Viharaya was built here with a temple chamber consisting of two shrines, one dedicated to Lord Buddha and to several others God “In the inner chamber there is a large reclining Buddha statue while to the left is a seated Buddha statue with the flat decorative style of frescos paintings of the Kandyan era adoring on the walls and the celling of the Chamber.

The shrine is perched on top of the rock and it overlooks the sea on one side while on the opposite side is the Sri Lanka Air Force (SLAF) camp.

“The British who were occupying the country first came to Koggala and used it as a station for their Air Force and took over much of the temple land as well. After the Second World War began in 1939, they expanded the airport and villagers in the area were asked to vacate the area. Most of them left along with the chief incumbent of our temple Koggala Pannasara thera who moved to Weligama and put up a small temple. It was there that I too was ordained in 1962.”

The rock on which the Hirugal Devalaya had been blasted and rock used for construction work on the camp thus destroying much of the ancient site of worship. However the main Buddhist shrine was left intact.

Around 1965,Venerable Pannasara Thera had decided to return to Koggala and reclaim the temple land. He had requested the Government, by then of independent Sri Lanka, to allow him to return. His request was granted and the Thera had returned to find the entire village deserted. 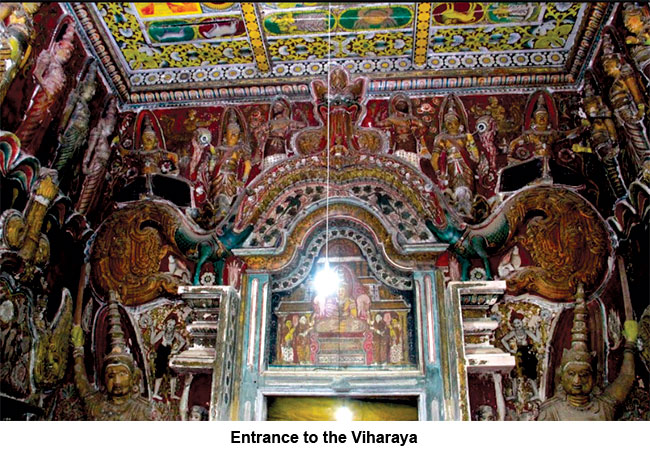 “Although I was ordained at the Weligama temple, I used to visit Koggala with the Nayaka Thera to Koggala. It was all jungle as most people had abandoned the area and moved to areas such as Badulla, Bandarawela and Talawakele due to the war,” Wimalakitti Thera said.

However when the Pannasara Thera returned to Koggala, people began taking up residence in Koggala once again but many were new inhabitants to the area. “Soon it was a busy village and I too came to live here, “he said. Since then the Devagiri Viharaya has been declared an Archeology site and continues to attract visitors from all over the country.

“A lot of maintenance work needs to be done on the temple’s ceiling and frescos. We do not get a great deal of government assistance so we manage with whatever assistance our well-wishers give us,” the Thera added.