In search of the kills of a Wolf

In search of the kills of a Wolf 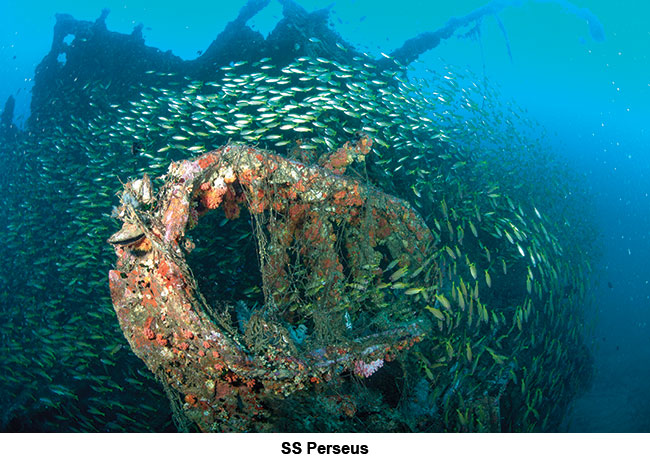 Technical Diving Specialist and underwater explorer,  Dharshana Jayawardena recollects discovering the wrecks of the SS Worcestershire and the SS Perseus lying in the sea bed of Colombo, which were sunk by SMS Wolf armed to the teeth with guns and sea mines at the height of the World War 1

It is the evening of 16thFebruary, 1917. The SS Worcestershire, a 7,200 ton, 138-metre long passenger cargo ship is steaming in a south westerly direction just off the coast of Mount Lavinia. She had just departed the Colombo Port, her sights set on reaching Cape Town, Africa.

She would never complete that journey.

A massive explosion shudders the whole frame of the ship and startles the crew and passengers. Soon it is quite evident that the Worcestershire is taking in water from her forward holds and is doomed to sink. The Captain orders an evacuation and fortunately, almost all crew and passengers survive the ordeal except for twocrewmembers. 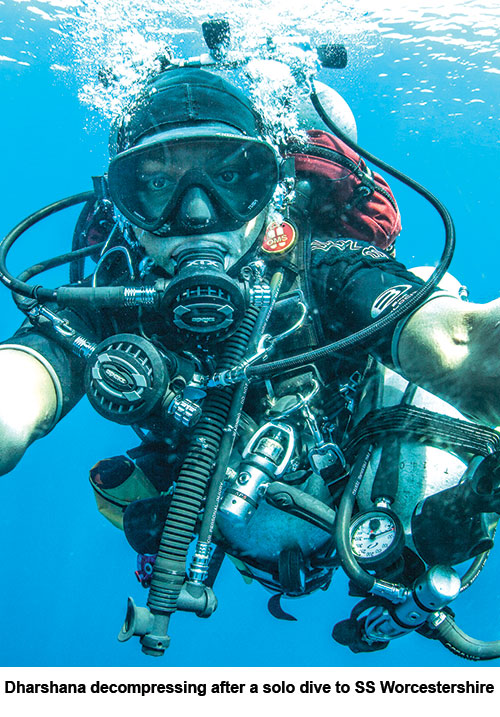 What had caused this explosion? Just four days later, on 21st February, 1917, another passenger cargo ship, the SS Perseus, also suffers a similar fate. Suddenly the British Admiralty is forced toconfront the possibility that the hand of an enemy is at work; it is the height of World War 1 after all and their prime suspect is Germany.

Just a few months earlier, a highly classified military operation was set forth in motion from Kiel, a port city in Germany. The objective of this mission: Disrupt allied commercial shipping.

On 30th November, 1916, a seemingly innocuous merchant vessel quietly slips out ofthe Kiel Harbour. She would not make landfall for the next 15 months until her triumphant return back to homeport on 24th February, 1918. During this time, she would unleash a reign of terror on the allied shipping lanes all around the world, capturing or sinking almost 30 merchant vessels. Her route would result in an epic journey around South Africa, Madagascar, India, Sri Lanka, Indonesia, Malaysia, Australia, New Zealand and South America.

She is the SMS Wolf. Beneath her seemingly harmless exterior, employed purely as clever subterfuge to conceal her identity, she is armed to the teeth with guns and sea mines. She also has the Wölfchen (Little Wolf), a single-engine amphibious reconnaissance biplane used to spot potential victims.

In February 1917, the Wolf is stalking the shores of Sri Lanka. A few days before the Worcestershire is sunk, the Wolf is about 15km south west of Mount Lavinia. Her formidable Captain, Carl August Nerger, gives the order to drop sea-mines. Then she sails further north and drops more mines, targeting a busy shipping lane out of the Colombo Port. It is to these sea mines that the SS Worcestershire and the SS Perseus would later succumb.

Where are the wrecks of the SS Worcestershire and the SS Perseus today?

In 2009, almost a decade ago, I was studying the Admiralty Maps around Colombo. For the wreck hunter, these maps could be a great source of information, particularly so because they indicated locations of old shipwrecks so that navigators of merchant vessels could avoid dangerous obstructions that could cause their ships to run aground. During the study, I noticed the symbol of a shipwreck marking the location approximately 15km southwest of Mount Lavinia. The symbol indicated a wreck not dangerous to surface navigation. This meant that the wreck was well underwater and not a hazard to passing ships. The map also indicated that the depth of the area was close to 60m. In diving terms, this was relatively deep and required technical diving techniques to explore. Using the map I derived GPS coordinates of the location, immediately set sail to the indicated area, and conducted a survey dive. There was nothing except for sand. I soon learnt that Admiralty Maps could be extremely inaccurate because of many reasons and it could not be trusted at face value. 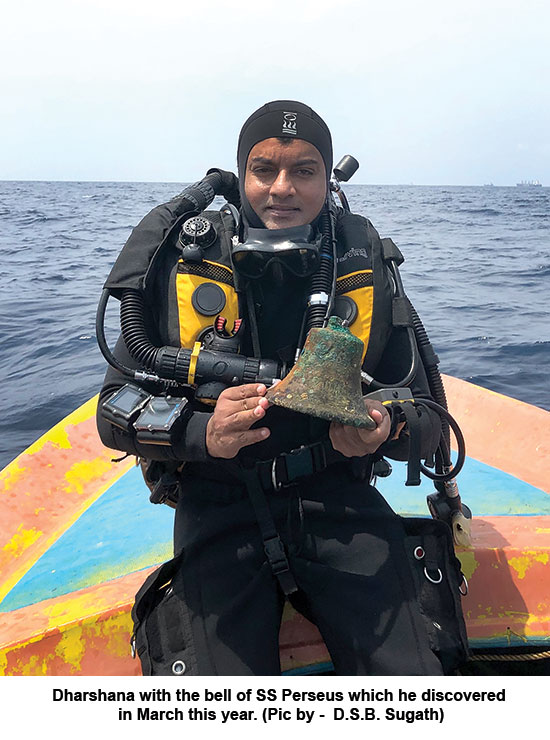 However, my search for this wreck continued for the next two years. I did several exploratory dives to 60m in the area and came up with nothing. It was then that I heard of whispers of a Bamba wisi haye neva, or in English, ‘a wreck at 26 fathoms’ from the fishing community. I finally managed to get a GPS location from them and set forth to explore. The indicated point turned out to be several kilometers away from the point depicted in the Admiralty Maps. Using a small echo sounder I scanned the area and was elated to find the presence of a subterranean object at 55m. Somewhere deep below was something unusual lying on the seabed! I quickly geared up for a technical dive, with multiple tanks to provide me with enough air to go down and stay deep, and plunged into the ocean eagerly.

At 45 metres of depth, out of the darkness below, a monstrous shape emerged. I was at the bow of a massive shipwreck. I quickly captured some pictures and sank down below to explore. It was a wonderland of marine life but there was no clue to its identity. Unravelling the identity of the wreck would become an obsession for the next three years. It is during this period that I uncover details about the epic journey of the SMS Wolf and her two victims off the coast of Sri Lanka. Could this wreck be the either of them? Over the years, with multiple technical dives to the deep I uncovered circumstantial evidence that increasingly l favoured the “Worcestershire theory”. The final proof came on 13th March 2014 when I found a bell on the wreck. It had two words Worcestershire and Liverpool. The wreck of the Worcestershire had been discovered without any doubt. (The bell was handed over to the Maritime Archeological Unit)

During the same period, fishermen had taken me to another massive wreck 15 km due west of the Colombo. It lay at a depth of 40m. For years, I had spent hours attempting to identify it as the other victim of the Wolf, the SS Perseus, and had almost given up, when I discovered a bell in March 2019. On it were engraved the words SS Perseus and Liverpool. Nearly hundred years after, the SMS Wolf sank the Worcestershire and Perseus, their story has now resurfaced, never to be forgotten beneath the dark depths of a mysterious ocean again.