A ‘darkie’s struggle to fit in at Oxford

A ‘darkie’s struggle to fit in at Oxford 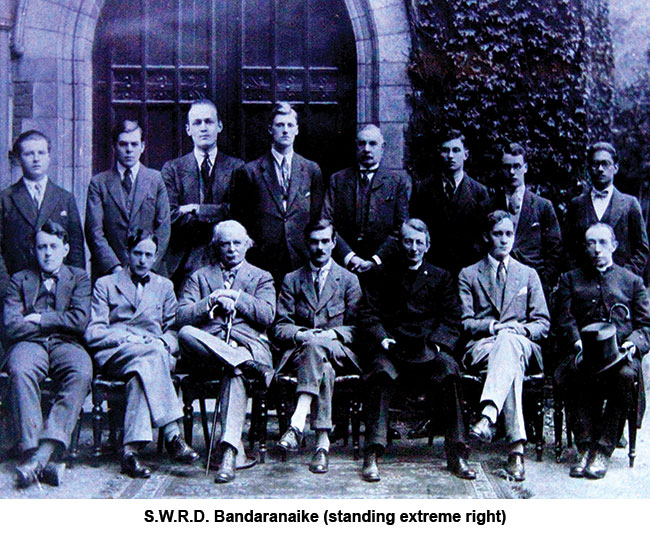 MY OXFORD DAYS was written by the late Prime Minister S.W.R.D. Bandaranaike in an exclusive series to the now defunct monthly magazine Ceylon Causerie in 1934. In this extract from the series he documents his struggle as a ‘darkie’ trying to fit in at Oxford and gain acceptance in a world dominated by ‘white men’. Despite his initial frustrations with the system, Bandaranaike went onto become an ace debater and served as both Secretary and Treasurer in the Oxford Union from 1923-24.

I have now to deal with a phase of my Oxford career, which if it was darkened by unhappiness and loneliness has not left any permanent scar on my mind, and certainly had an important bearing on subsequent happenings. My first year at Oxford, once the novelty of things had worn off and I had settled down to College routine, I recollect as a period of disappointment and frustration. In all directions I found myself opposed by barriers, which though invisible and impalpable, were nonetheless very real. I wrote a story for our College magazine, the “Cardinal’s Hat,” which was politely returned.

To get even a trial for one of the Christ Church tennis teams was apparently an impossibility; a few half-hearted efforts to catch the President’s eye at Union debates proved futile. But the most humiliating disappointments were reserved for the social sphere. With positive rudeness and brutal frankness one might be able to deal more or less effectively; bounders and snobs can be suitably handled. But the tragedy of it was that the vast majority of my fellow undergraduates did not behave in the former manner and were certainly not the latter. The trouble was far more subtle and deed-seated: in a variety of ways one was always shown, politely but unmistakably, that one was simply not wanted. It is terribly wounding, after laboriously patching up an acquaintanceship with one’s neighbour at dinner, in Hall or at lectures, to be passed by in the street as though he had never seen one, or, still worse, to see him hurry off with a hasty nod through fear that he might have to walk with one along the street, or again to notice the embarrassed manner In which an urgent engagement is pleaded whenever an invitation to lunch or tea is extended.

It is not easy to survive this type of experience and many Eastern students soon thrown up the sponge in disgust; some just subside into a routine of work and the companionship of a few friends among their own countrymen, others, of a more vigorous disposition resort to pleasures and associates of a more questionable sort.

I must honesty confess what saved me from such a fate was my conceit! Although at the Union I never seemed able to catch the eye of the President, I knew that I could make a much better speech than most of those who were given preference over me; I knew that there were many members of the tennis team I could beat if I were only given the chance; I knew I could write better Greek prose than many of these scholars, with their long rustling gowns, who looked so superciliously at the “darkie” who had the temerity to read for the Honour School of Classics .I felt that I had only to be patient , and keep on trying and sooner or later I would succeed.

I also realized that within the cold outer Oxford of mere routine there was a wonderful inner Oxford, into which it was well worth travailing to win an entry. But how? My experience was that of poor Alice in her Wonderland: the golden key that would open the door to the beautiful garden was forever eluding me. As for my fellow-undergrads, I soon learned that their conduct sprang not so much from prejudice or snobbishness as from shyness, reserve, and the fact that, coming up from great Public Schools, they had at the very start their own sets and cliques, which made them less inclined for the company of strangers.

But it was a bad time, that first period. Added to my mental malaise was the physical discomfort of the damp, grey, sunless winter. Although still fighting, I fell into a deep depression. I remember reading Edgar Alan Poe with a morbid delight, that strange mingling of melancholia, horror and beauty seemed to suit both my mood and my surroundings; for surely there was a touch of the House of Usher about that sitting room of mine, and it was in just such a chamber that the young man mourned his lost Lenore “dreaming dreams that mortals never dared to dream before.”

One little adventure at this time comes to my mind, which helped to restore to me a certain degree of mental health and a truer sense of proportion. While returning to my lodgings one evening, more than usually bitter at some disappointment, I passed a beggar on the pavement; he was not an unusual type, old with a sickly-white face, threadbare, patched clothes and gaping boots. He held a few boxes of matches in his hand for sale. In the usual, whining voice he begged for a penny; he said that he was very hungry. There was nothing strange in all this, and ordinarily I would have tossed him a penny and walked on, but I was in a black mood that day. This old man now, he was probably a humbug like the rest of them, trying to gain my sympathy by a pretense of hunger when what he really wanted was probably to go to the nearest pub. I stood and contemplated him for a moment, and then as the whim entered my mind, “I won’t give you money.” I said, “If you are hungry come with me and I shall give you something to eat.” It was my fancy to put him to the test. Reluctantly he came. I seated him before a roaring fire in my room and quelling with a stern eye any incipient desire to raise questions on the part of a bewildered landlady, ordered tea and bread and butter and crumpets – lots of them.He was obviously very hungry; he consumed enormous quantities with a grim concentration. The sight fascinated me. I had never seen such stark hunger in a human being before. Gradually, with the warmth of the fire and the warmth inside him, he relaxed and became loquacious. Probably , a good deal of what he said was false, but there was clearly a thread of truth that ran through his tale – the unceasing struggle from his youngest days against hunger, against illness and despair; never had fate given him anything like a chance, and yet he was cheery enough. My petty worries faded before this elemental fight for existence. Finally hat in hand , the old man shambled off, leaving in my room a dank and musty smell , but in my heart a new strength and a new hope.

The problem that faced me was peculiarly my own. No one else could have helped me to find a solution; indeed it was not one that could profitably be even discusused with others. There were, however, certain Ceylonese friends during my first year, whose kindness helped somewhat to cheer me.