A FATHER’S LESSONS IN LAW AND LIFE

A FATHER’S LESSONS IN LAW AND LIFE 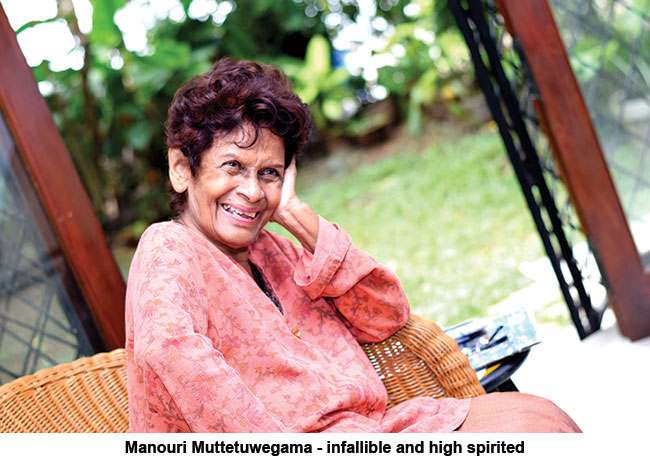 Human rights activist and renowned legal mind, Manouri Muttetuwegama, who was also the Chairperson of the Disappearance Commission and more recently, the Head of the Consultation Task Force on Reconciliation Mechanisms (CTFRM), reflects on her legendary father, the late Dr. Colvin Reginald de Silva, one of Sri Lanka’s finest sons

“He was a mahakalu Sinhalaya who would return home from courts and be in his sarong and banyan on the verandah with his clients, political associates and later in the day, immerse in his writing. Being the lover of children that he was, daddy would prop us on his shoulders,” fondly recollects Manouri Muttetuwegama of her father, the late Dr. Colvin R. de Silva.

The legal icon, the constitutionalist, the historian, the leftist and the silver-tongued orator, Dr. Colvin R. de Silva would signal to the police to wait until he concluded his brief in courts before being taken to custody by the imperialists. One of Sri Lanka’s finest sons, he made ‘Bogambara’ his temporary abode for the sake of his country. “Daddy was taken into custody by the British so unceremoniously, unlike today where VIP treatment is accorded to politicians. But he was proud as he was doing it for the country, so much so, later even the British Government was convinced of it.” Little Manouri, then only three, together with her siblings, were left behind with their mother, a devout Buddhist, who sang softly to

Born to a mother whose family had an uncle or a brother taking robes in every generation, it was only natural for Manouri to be admitted to her mother’s school Visakha Vidyalaya. “She came from a family of temple builders and found the temple to be an outlet of solace, especially at times when things were tough at home with daddy’s political involvement. And daddy, far from the temple-goer that he was, stood by my mother, encouraging in her spiritual pursuits. He was very liberal-minded.” When the young Barrister-daughter returned from England, Dr. De Silva was convinced that she had made the best of both worlds. “While London exposed me to more than law books, my Buddhist upbringing enabled me to sit on the ground with my legs to one side and my skirts covering my knees!” chuckles Mrs. Muttetuwegama.

Her father’s daughter that she was, young Manouri took to student activism like a duck to water at the University of London, where her illustrious father was before her. The first woman to have held the chair of President of the Ceylon Students’ Union, Manouri earned the title ‘street lady’ for her vociferous activism. At a time when the natives were still aping the imperialists and growing up in local public schools which were “copies of the British education”, young attorney, Manouri did not feel “planted and alienated” in her own country, after a ten-year hiatus in England from 1953 to 1963. The “liberating experience” of London, only shaped her to experience the socio-political fabric prevailing at home with “no trappings” as she calls it. “My father further fuelled my spirit by exposing me to the top brass and the most remote folk of his electorates,” she adds. Be it metropolitan hubs as Dehiwala-Mount Lavinia or outskirts as Agalawatta and Balapitiya, Manouri would feel at home in her father’s election campaign. Several years later, she would re-write history in rural Kalawana where her late husband Sarath Muttetuwegama, a man who lived in the hearts of common people, held fort.

Behind his daring and spectacular aura, his unmatched witty repartee, was a man of warmth and universality. The legal genius who could swing a jury, was humble enough to applaud his ‘juniors’ for a job well done. “My father never hesitated to give credit to anyone who deserved it. He encouraged his juniors, applauded them whenever they deserved it. This universality of his personality still astounds me.” These same principles of universality he abided by, Dr. De Silva, sought to translate to the First Republican Constitution. The attempt, however, as Mrs. Muttetuwegama avers, was sadly misinterpreted in certain quarters. A qualified lawyer at the time when her father drafted the first Republican Constitution, Mrs. Muttetuwegama recalls walking as a ‘proud daughter’ beside him into the constitutional assembly. “The exercise of the 1972 Constitution is a matter of regret to me today. My father’s objective was to champion individual rights of liberty and equality and give a chance for everybody to make a place for himself.” 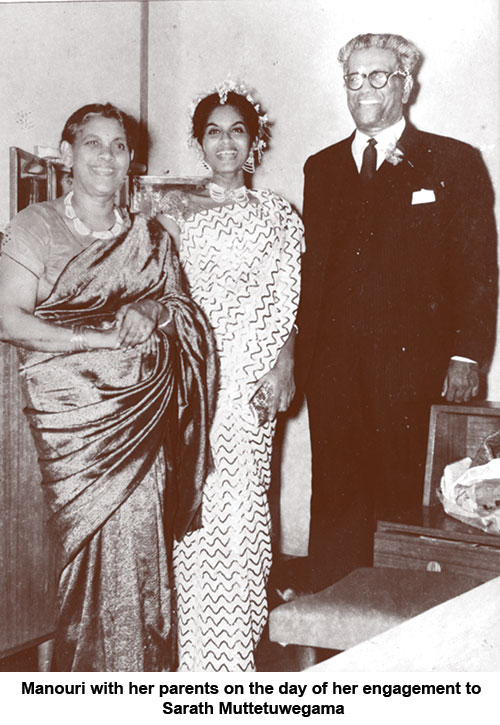 During the debate on the ‘Sinhala Only’ Bill in 1956, Dr. Colvin R.de Silva questioned: “Do we want an independent Ceylon or two bleeding halves of Ceylon which can be gobbled up by every ravaging imperialist monster that may happen to range the Indian Ocean? These are issues that in fact we have been discussing under the form and appearance of the language issue… One language, two nations; two languages, one nation…” Reflecting on her father’s foresight, Mrs. Muttetuwegama charges: “today true to his words, we have built up a mountain of rubbish in the name of Sinhala supremacy, which is no different to Meethotamulla! We have divided people into Sinhala-Tamil and so forth and then we have divided them according to jobs. The disparity in education which had been there for the past 30-40 years still continues.”

Dr. Colvin R. de Silva who fled Bogambara prison along with several other LSSP stalwarts and went into hiding in India and disguised as one ‘Govindan’ , documented his writings, credited as “real Marxist work” under the pseudonym Lily Roy. “LSSP was my elder sister, only a few years older than I was,” chuckles Mrs. Muttetuwegama who recollects how the larger proportion of her father’s legal fees was invested in party activities. “The historian he was, daddy used to say that the revolution was around the corner but it would not happen in his lifetime but he would nevertheless work as if it was on which gave him that sense of whole heartedness.” She is quick to add that,had her father lived today, he would have still accepted the challenge. Critical of present day’s so called leftists, the activist lawyer that she is, Mrs. Muttetuwegama opines that, they are on an “impossible see-saw.” While trying to hold onto old leftist concepts of egalitarianism, non-racism and at the same time labouring to stay in the public eye, they are making the “inevitable compromise.”

Among her unforgettable memories of her father’s sensational trials were those of the Sathasivam murder, Kularatne arsenic poisoning case and the attempted coup of 1971. Dr. De Silva’s three-week address to the jury in the attempted coup of 1971 was one that “swung the jury” recollects Mrs. Muttetuwegama. The acquittal of his client Sathasivam led to the loss of his Wellawatte-Mount Lavinia electorate in 1952 with the case preceding the election. When a woman shut the door on Dr. De Silva while canvassing in Dehiwala, accusing that,‘no wife will be safe in this country’ thanks to people like him, his wit was at his best when he politely remarked, “madam, that is a judgment on your husband!” 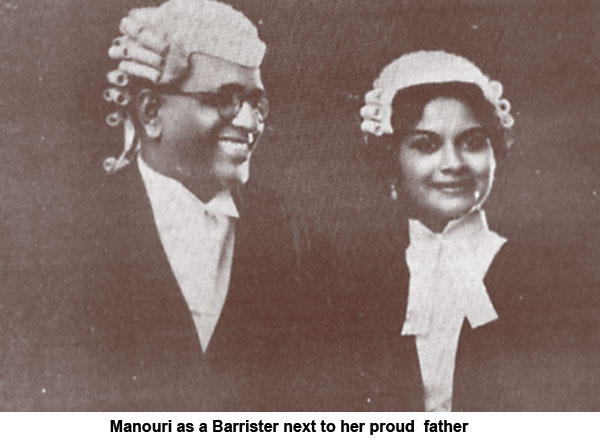 It was 12-year-old Manouri who received the renowned forensic expert Sir Sydney Smith who heeded her father’s call and arrived here to give expert evidence in the Sathasivam murder case. Dr. Smith, a family friend by then, whom she had the privilege of visiting in Edinburgh with her father was a ‘Scotsman with a heavy accent’ as Mrs. Muttetuwegama recollects. “I remember how he used to pick carnations for me from his garden, which I pinned on to the button hole of my overcoat,” she smiles at the memory. Dr. Smith and her father, got on like a house on fire, she says, adding that they were of similar intellectual stature and could appreciate each other.

Despite the benefit of anonymity to a certain degree, as Mrs. Muttetuwegama says good humouredly, being her father’s daughter had not weighed too much on her. She adds: “Moreover, I’m my husband’s wife and my daughter Ramani’s (an accomplished lawyer in her own right) mother, but I’m only humbled.” More than the drama of her father’s legal feats, what moved her most was his dexterity to go straight to the ‘essentials of the Law’ and his treatment of the Law as a social instrument. “He was never tied down to the precedent, instead he had a sharp appreciation of legal concepts. He treated courts with reverence and drilled into us that one is never to treat the courtroom as a political platform. To him, it was not just a matter of mastering the technical aspects of the Law. Integrity, decorum mattered most to him. He set the example of never humiliating or bullying a witness, never misleading the judges and most importantly to remain relevant in courts.”