On the buzzing China Street of Pettah stands a saffron-hued two-storeyed building, merging effortlessly into the environs. Filling every bend of it with chinaware, cutlery, glass tumblers, stainless steel kitchenware, baking utensils and much more, S.M. Assena Marikar & Co. had been keeping vigil on China Street since 1840. If only its walls could talk, the store continuing to stand tall, would look back on two world wars fought, ethos of a colonial rule and the changing skyline of Colombo’s business hub…

Being in business for 178 years amidst changing times is a Herculean task. Retaining the family business with no change of hands makes it a double feat. S.M. Assena Marikar & Co. with its sixth generation business legacy has had it all. The secret behind its success lies not within the exquisite chinaware or gleaming wine goblets but in customer relationship the business takes pride, says its fifth generation proprietor, Abdulla Makki Hashim.

Nestled among the goods of his ancestral business, his modest ‘office space’ overlooks the busy thoroughfares of Pettah. “Even if customers walk in when we are about to call it a day, we never turn them down. My forefathers strongly believed that disappointing a customer reflects badly on one’s environment,” Hashim shares the very philosophy on which the grand old business is modeled on. “What matters is not the profit but the relationship with a customer,” adds the affable, tri-lingual proprietor pointing at the special cake tray which was distributed among customers in 1940 for its centenary celebrations. The centenary souvenir trays, as Hashim informs us, speak for the good will of a foreign supplier who had gifted them to the company to for its centenary. The complementary tray had been recently ‘gifted’ to Hashim by a long standing customer whose ancestor had been once the proud recipient of it. The fame of S.M. Assena Marikar & Co. had extended even beyond the shores with its china ware finding place at overseas auctions. A recently traced plate from an Australian auction with the company’s name embossed on the reverse, has found abode in its birth place!

With their roots in the deep South of the island, Hashim’s ancestors arrived in China Street synonymous with trade and set up their Sinhala-ulu (traditional roof tiles) adorned enterprise 178 years ago. The business eventually fell into the capable hands of his great-grandfather S.L.M. Hashim who took over the reins from the founding partners.A single-storeyed modest facility, as his descendant tells us, had then occupied a considerable space on the street. During the First World War, the original building was demolished. The building which evolved over the years took its present character in 1952. The original name board of the company imported from Czechoslovakia in 1840, which then sourced enamel ware for the business, still stands proudly at the entrance.

For founder fathers, with a vision of seeing their enterprise thrive for another 100 years, the exercise was not merely the means of earning their bread and butter, but a labour of love. “This was passed down to each generation and it is now incumbent on me to see that it continues for another century,” smiles Hashim. Founded on the corner stones of honesty, integrity and simplicity, the company’s present owner personifies the values. “I abhor the title, ‘boss’ because I don’t believe in wearing a crown alone,” he reflects.

As its name suggests, the staple of China Street, in times of yore was chinaware (now commonly called porcelain) as Hashim explains. His great-great grand father then held fort of this business hub reputed for imported crockery. The leading dealer for sought-after global brands such as S.S. Crown, Johnson & Johnson, Meakins, Judge Brand Enamelware and Imoto Shanghai, S.M. Assena Marikar & Co. to date continues the legacy of chinaware while diversifying their range of products to meet modern consumer demands. The business has today given wings to another subsidiary- Zden, on Melbourne Avenue, Colombo 4 offering a wide range of household products under the banner of ‘Kitchen-Living-Dining-Bedroom.’ Their printing facility enables branding on ceramics and glass as well.

With efficient customer service and affordability at its core, the 178-year-old business legacy transcends ethnic, social and religious boundaries. So many temples and priests seek the customized services of Hashim and his staff for specially designed crockery and tiles for temples. Leading hotels in the country count on S.M. Assena Marikar & Co. for quality products.

Understanding a customer is the ticket to a long-standing relationship, avers Hashim. “Especially in a setting like Pettah, we need to be conscious of the mood of each customer. It’s a very busy landscape and many may step into the shop after a tiring day. Then we need to assure that a customer feels at home.” Taking over the reins of the family business at 18, Hashim has made his dynasty proud by still upholding the values championed by his ancestors. His children, the sixth-generation to take over the business, are well-versed academically and professionally. As the senior industrialist tells, all of them “have been put through the mill” before vesting in them the responsibilities of the company. “Whatever the field you may be in, you got to learn the ropes of the trade without taking short cuts. Hard training should be coupled with honesty and punctuality,” says Hashim, who has walked the talk. 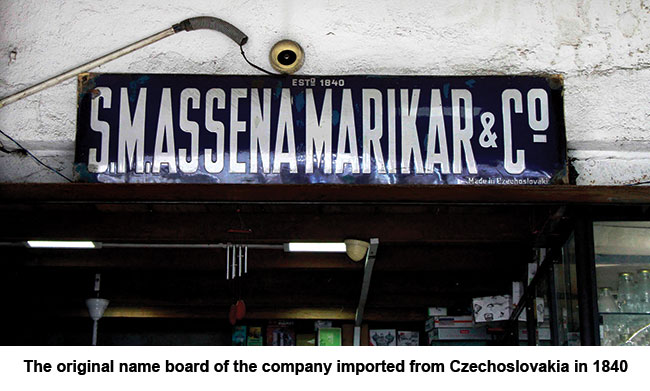 Be it new supplies for home, a wedding or a house warming gift, the well-stocked shop has something special to remember. Customers, as its owner shares with pride, can be assured of large quantities of any product at any given time. Besides its glass juice dispensers, spice bottles, dinner sets, sparkling cutlery and baking trays, S.M. Assena Marikar & Co. is also a repository of antiques. The pride of place is the Millners safe which is as old as the business, imported by the founder. The fire-proof, dust-proof safe which is today an item of antiquity, served all ‘banking purposes’ of the yester year. This vintage beauty, as Hashim tells us, had been the envy of many collectors including top financial institutions in the country. “The safe had a precise mechanism and one needed to be an ace in handling it. I’m told that, although my father could operate with such ease, none of his brothers could,” recollects Hashim with a smile. The British-made original seal of the company, the puncture and the emboss machine, all motifs of a bygone era, are still preserved.

His blue-blooded ancestry has only made Hashim humble. The constant demands on him by customers, suppliers and many more, do not disturb his composure. A progressive man with an open mind to embrace anything good of any religion or culture, Hashim surmises: “life is too short and we need to be liberal enough to add only good things to life. Just as much as you are destined for great things, there is a strong reason for you not to be destined for some. If you acquire what should not be belonging to you, in business or otherwise, it will not be retained within your reach.”

The globe trotter he is as his business demands, Hashim is rooted to the land of his birth. “I’ve seen so much of the world, but there is no land like ours.” Urging his fellow Sri Lankans to be ‘road-runners’and forge unity for a brighter Sri Lanka, the enterprising industrialist aptly reflects: “profit or loss, God is with us…”