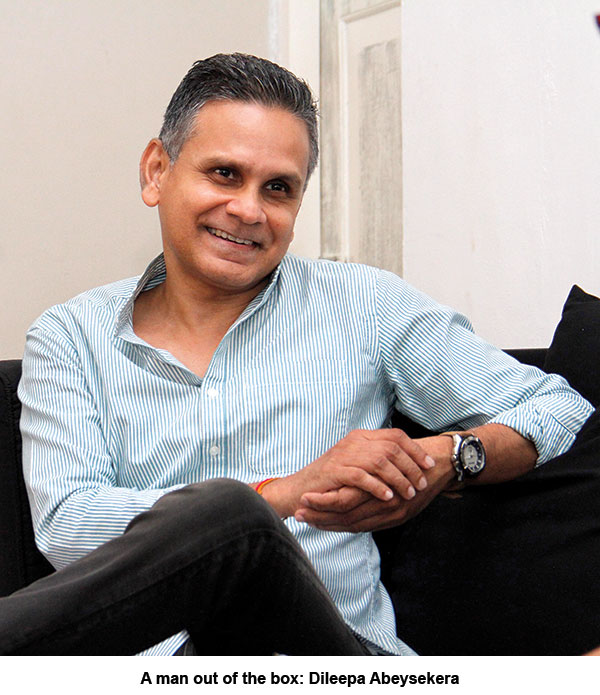 “Creativity is everybody’s business,” reflects Dileepa Abeysekera. Director, Heensare and the son of the celebrated lyricist and radio personality, Karunaratne Abeysekera, Dileepa debunks the myth that creativity is confined to the arts. “It is all about using your knowledge in different contexts, a kind of a mix and match exercise,” says Dileepa who has walked the talk in his enterprise of advertising and urges fellow Sri Lankans to literally ‘come out of the box’ and ignite the spark of creativity we Sri Lankans are naturally gifted with….

“Instead of cursing the traffic on our roads of which we have no control over, why not work around it when stuck in our cars? Why not catch up with the family returning home together? Listen to some good music?” suggests Dileepa. It all boils down to thinking afresh, says Dileepa who cites the Thai experience of building up a new culture around a common social grievance. “Notorious for their traffic jams, Thailand came up with a culture of offering practical food packs which one can enjoy while being stuck in their vehicles. Individually people found ways of navigating through the issue.”

The catch phrase of ‘thinking out of the box’ has become a cliché charges Dileepa who finds many not scaling the walls of the box. “The box will never cease to exist. It is like being in prison- either you got to scale the walls or dig a tunnel and find a way of getting out. It all starts with common sense and sadly we have lost that element connected with common sense. We find excuses labeling creativity as an artist’s concern but it concerns every one of us from a home-maker to a creative director. In this context we are a little slow in understanding what creativity is all about and mobilizing it individually.”

Gifted with his father’s creative gene, Dileepa has translated his DNA to his professional life. Inspired by the literary genius of the vernacular, Kumaratunga Munidasa’s ever green classic Heensaraya, Dileepa together with his team at his advertising agency- Heensare continues to bring out many a smile! “Very often we are asked for our name twice at various points and when we repeat ‘Heensare’ it evokes a smile which is our ultimate goal,” says the smiling creative brains behind it. Quoting the wisdom of Kumaratunga Munidasa; aluth aluth de nothanana jathiya lowa nonagi, hinga kema beriwuna thena lagee gaya maragee (the nation which doesn’t innovate cannot rise and when one cannot borrow any more, there is nothing to stand by any longer), Dileepa surmises that it finely encapsulates the notion of creativity.

Applauding his team for a ‘collective thinking process’ which wins the day at Heensare, Dileepa recollects fondly the formative ‘mobile’ days which drove him and his founder partners to ‘strategize’ and ‘brief’ each other in cafes and cars! “We were all a little weary of the trimmings and trappings of the industry and we wanted to be out of it,” he reminisces. The Bohemian days still reflect on Heensare. Its location in the plush environs of Barnes Place, Colombo 7, has little impact on the Spartan environment one walks into sans flamboyance often associated with the world of advertising. One is only convinced of Dileepa’s words, ‘you hardly see us working here but work gets done,’ when walking through its doors. It is all about ‘creative management of time and projects,’ says the professional who adds that ‘a stuffy environment can kill creativity’.

Dispelling the misconception that advertising is all about ‘deceiving’, Dileepa is convinced that only ‘truth’ can win the game. “We essentially base our work on truth and it works for us. If we don’t enjoy a particular project and if there is no truth in it, we don’t take it up. The results have been extremely rewarding because we come to work with smiling faces and we sleep well,” he adds.

Thankful to his vocation which puts his creativity to test, Dileepa calls for a think-tank of creative minds at national level as in the case of India. “Sadly we don’t have a knowledge-based interdisciplinary approach which can be replicated in every field in the country including media organizations which need to have a creative strategy apart from political and marketing strategies.” Both print and electronic media should embrace a strategy for the industry, reflects Dileepa, who goes onto to say that the ‘creative offering’ of mass media has been bulldozed by consumerism. 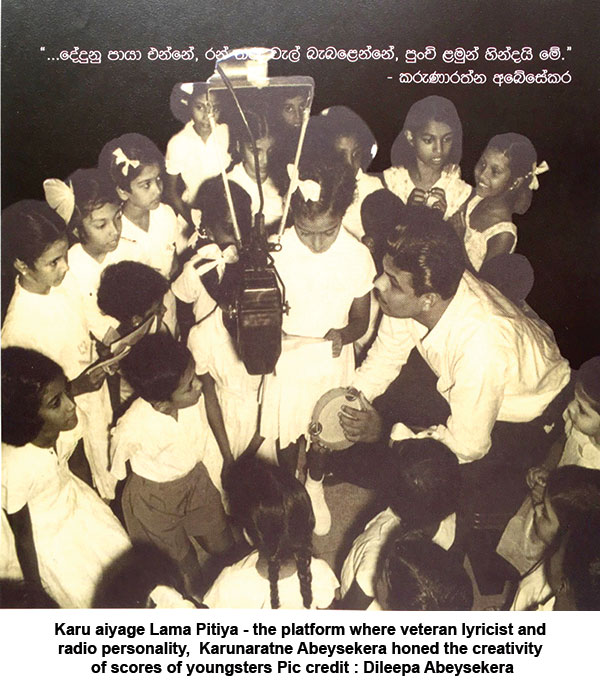 Revisiting the ‘golden era’ of our lyric and the film championed by his father and his contemporaries, Dileepa laments that the foresight of artistes of yesteryear is virtually obsolete today. “It was a time when we were on par with the world in terms of creativity, so much so the artistes of my father’s era and those before him, did not look back, they only looked forward. Though devoid of Google maps and Facebook, it was an era where our film-makers kept contacts with icons such as Stanley Kubrick,” says Dileepa who is disheartened that creative artistes of modern times are stuck in a rut embracing concepts of a by-gone era. “We have the infrastructure, we have an audience but where are the good movies? It is the same with the lyric,” he notes.

At a time when reconciliation has become a buzz word, artistes of yester year, simply used their creative common sense to achieve it quite spontaneously, says Dileepa who cites the classic example of the lyric Dakina dasune denetha endune rendered the perennial timbre of H.R. Jothipala. “The original lyric was in Tamil and the original lyricist of it and the musician Galagedera Haque invited my father to translate it for a Sinhala movie, as he had the foresight that this would take the song to a larger audience. The melody remained the same. Now this was reconciliation through collective creativity.”

While technology is deemed to be a ‘killer of creativity’ by certain quarters, Dileepa maintains that it is neither good nor bad, but “well intended.” He alludes to the Western classic- Shane in which the Cowboy is questioned by a small boy as to whether the gun is meant for shooting at people. “He responds that the gun is as good as the man who carries it. Technology is just like that. Ultimately your tool is your mind and not these external devices,” he concludes.