Carving a life out of Wood

Carving a life out of Wood 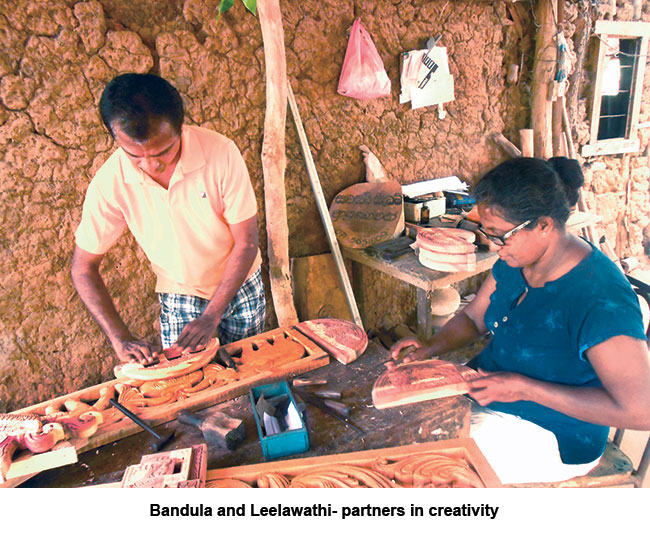 Randima Attygalle visits Ehalagala, a rustic hamlet near Sigiriya where the art of wood carving is an indulgence to many

“Who knows, I may have been here during Sigiri Kasyapa’s times!” chuckles Namal Bandula Silva whose wood shed is tucked away in Ehalagala, a rustic village lying below the Sigiri rock. Now a home to about 30 wood carving families, Ehalagala is believed to have been made a centre of the ancient art by one ‘Galle mudalali’. The mudalali, as Bandula tells us,had brought the Southern art along with him as he settled in Ehalagala.

The art had been an indulgence to Bandula since 13, although not gifted to him hereditary. “My father was an employee of the Archaeological Department and no ancestor of mine had taken up the vocation before myself.” Becoming an understudy of Jayawickrama Gurunnanse at 18, Bandula furthered the art systematically which was until then only a hobby. A father of three children, all grown up now, Bandula is grateful to his vocation which had sustained his family all these years. He takes pride in tutoring his wife Leelawathi in the delicate art. Their youngest son Gihan, now working for the Surveyor General’s Department in Anuradhapura in his spare time joins his parents in their humble wattle-daubed working hut, which was once their home. “Thanks to this art which helped me sustain my family, I managed to put up a more solid structure,” smiles Bandula, seated in his partially done new house.

Pasaru ketayam, Sigiri frescoes (carved on wood), elephant figurines, thoran poru and decorated door frames are Bandula’s signature creations. As of late what is popular among tourists as the ‘Secret Box’ keeps the artiste busy. The Secret Box, carved out of the timber of gansoorya with its flat smooth appearance tricks a person. Little would one know of the openings masterfully worked into the surface by the gifted carver, yet concealed. “This is a popular item among tourists visiting Sigiriya. They are amused to find that there are little compartments worked into it as the openings are obscured,” explains the wood carver. Sigiri frescoes too bring an income to Bandula and his fellow wood carvers in Ehalagala. These creations, however, reach the market through middle men who purchase from carvers. Lobbying for a mechanism where ‘community tourism’ can be promoted, Bandula urges tourist guides and other partners in the industry to enable a window to the real exercise. “Visitors to the island will appreciate the real taste of the art when they can blend in with the community. A visit to Sigiriya should not be confined to the climbing of the rock only, ideally it should be fused with other community-based activities. Be it local or foreign, if visitors can actually experience how a wood carving is done, they will be able to relate to the final product more,” offers the craftsman food for thought.

The hotels in the area which source these crafts through middle men should ideally purchase directly from craftsmen enabling a win-win situation, suggests Bandula. Some of these hotels in the area are equipped with their own workshops and Bandula and his fellow craftsmen from time-to-time are made offers to be their ‘hired craftsmen.’ “We don’t want to lose our independence at artistes in such a setting as we only end up being hired employees and not authentic craftsmen,” he reflects.

Largely a seasonal vocation, Kandy Perahera season and December tourist season keep wood carvers of Ehalagala mighty-busy. The timber varieties as gansoorya and kolong are largely sourced for the art as the craftsman tells us. Ebony or kaluwara which once used to be a popular wood is now a luxury owing to its soaring prices. He further says that only permit holders of the State Timber Corporation are legally sanctioned to do ebony carving. A permit holder, Bandula, bemoans that even the limited stock of ebony he is entitled to buy at the Corporation, he cannot afford today due to the high cost. 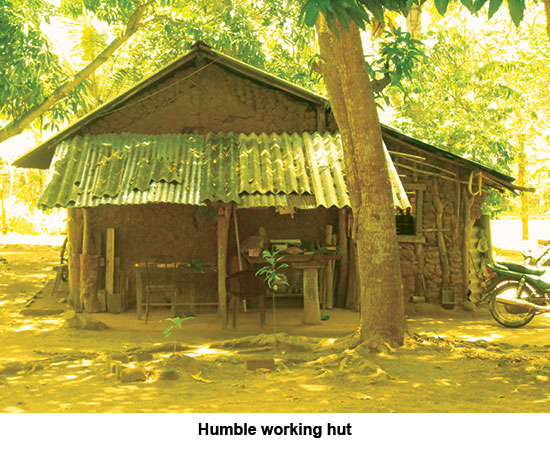 An active member of the Crafts Development Society of Ehalagala affiliated to the National Crafts Council, Bandula is disheartened by the lackluster mindset of certain stakeholders who are supposed to be the watchdogs of craftsmen. “Although we were given assurance at one point that bank loans would be granted to further our trade, to date no such facility has been given. Without the intervention of responsible state agencies, craftsmen like us cannot afford to get bank loans as out trade is largely seasonal.”

Each carving, as the experienced craftsman points out, takes its own time depending on the intensity of the art. The carving of the now popular Secret Box among the overseas visitor, demands nearly two hours, he says. The age-old rituals associated with the craft are now virtually obsolete, says Bandula. Shanthi karma and other poojas performed before felling of a tree and at the point of carving are now habits of the past. Apart from the electric saw which has mechanized the process to a certain extent, the tools associated with the art still remain modest.

In spirit of Sri Lankan hospitality, Bandula and Leelawathi treat us to a cup of plain tea and home-grown bananas. Humble folk with large hearts, the couple offers beli fruit and lime from their compound as take away gifts. As we bid good bye, Bandula coyly admits taking us by surprise that it was his 51st birthday! We at Lankan Isle wish him good luck!