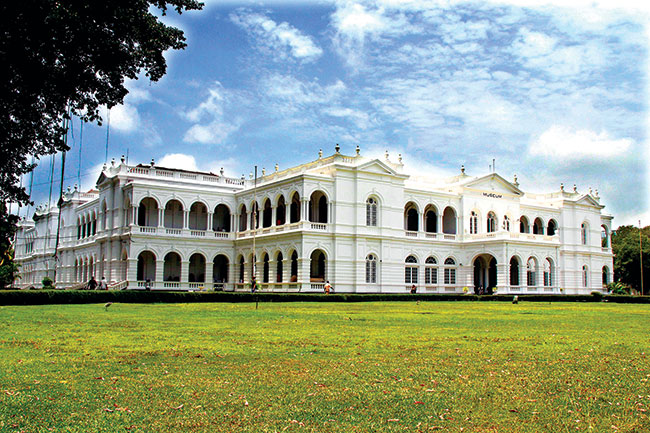 The Colombo National Museum, Sri Lanka’s premier repository of objects relating to the country’s culture and heritage stands in all its glory in the heart of the city. For the past 140 years, the grand stature of the building and its well laid out garden have drawn thousands of visitors from all over the island and across the ocean, who are keen to learn more about the country’s past.

The Museum, the brainchild of William Henry Gregory – Governor of Ceylon from 1872 – 1877 – opened its doors on January 1st, 1877. Till today it remains the most visited Museum in the country drawing around 300,000 visitors annually.

Gregory’s vision for a museum was to build one “not to function as an ornament but be a useful institution meant for culturally educating the people,” says Sanuja Kasthuriarachchi, Director, Department of National Museums. Every endeavour has been made by successive directors of the museum to stay true to the spirit of its founder.

There could have been no better person than Gregory to take on the task of overseeing the construction of a museum for the British colony of Ceylon. Before he embarked on his gubernatorial career in the country, he had served as Chairman on a Committee appointed in 1860 to examine the British Museum and was passionate about his work.

“Gregory had harboured a grand idea of converting the British Museum into the finest and most scientifically arranged establishment in the world but his proposal did not win enough support and Gregory had to wait till he came to Ceylon to conceive and construct a museum as he envisaged,” according to the chapter dedicated to the Founder of the Museum included in the souvenir issued to mark the centenary celebrations of the Colombo National Museum in 1977.

In Ceylon, he found the ideal conditions for the creation of a museum and in his very first year of administration he had ventured on the project. “The island’s economy was sound for it was a period of prosperity in the coffee plantations. The flourishing condition of the Exchequer spurred him on to the construction of the museum without any constraint,” the centenary publication says. 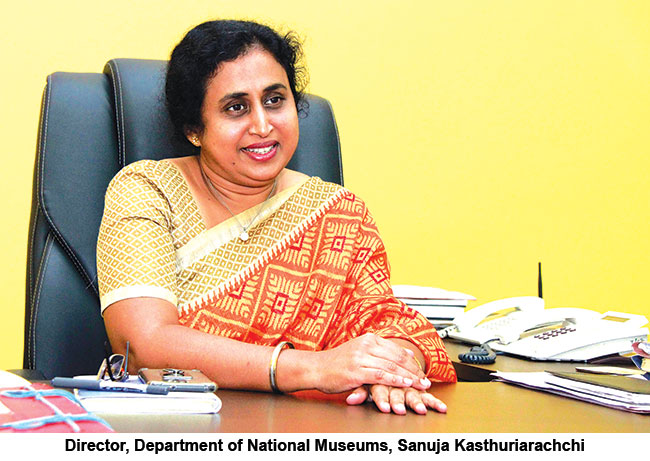 Gregory soon won support locally with a well-argued and undeniable case placed before the Legislative Council for the establishment of a Museum for Ceylon. But as the colonial governor was not an autonomous administrator, he had to approach the Colonial Office with his proposal. It was initially rejected.

But Gregory was in no mood to abandon his plans in a hurry. He built up enough public opinion in support of the Museum Project, that soon the local press too joined in supporting his cause and was critical of the Secretary of State of the Colonies – the Earl of Kimberley who stood in its way. The project finally won reluctant approval from the colonial office, which, while bemoaning the expenditure the project entailed, was unwilling to antagonise the local public.

Approval had come with Kimberly remarking rather bluntly. “The Museum is evidently a hobby of Mr. Gregory’s and as he does his work zealously and well, I am afraid I must indulge his fancy; though I am doubtful of its utility.”

The motion to include a sum of Rs.50,000 under new public works for a museum was moved by Governor Gregory as the President of the Legislative Council on September 25, 1872.

While he made an impassioned speech in favour of building a Museum for Ceylon, there were detractors among the Council members who were unhappy about the cost of the project which was expected to cost over Rs.125,000. Gregory won support for his motion from Muttu Coomaraswamy, the Tamil representative on the Council and after an assurance that the project would not exceed the sum of 12,000 sterling pounds (About Rs.2.3 million at today’s rate), the Motion was unanimously passed. A week later, “An Ordinance to provide for the establishment and regulation of a Public Museum in Colombo was moved in the Ceylon Legislative Council on August 4th, 1873 and a month later, on September 3rd, 1873, the Council unanimously approved it.

Once the project work was set in motion, things moved swiftly with Gregory personally supervising all its work. The designing of the structure was entrusted to the government’s architect James G. Smither. Construction work on the building began in 1874 and work was completed in 1876 at a cost of Rs119,993.93. The contractors were Wapache Marikkar and S.M. Perera.

The old capital cities of Anuradhapura and Polonnaruwa were diligently scoured and ancient sculptures and remains were collected for furnishing exhibits at the new institution. Considerable space within the Museum was also set aside for a Library, to be made accessible to all readers.

In the meantime, Gregory had handpicked a man to become the first Director of the Museum. He was Dr. Amyrald Haly and he took up appointment as June 25, 1875 as the construction work was underway. When the Museum opened its door to the public on January 1st, 1877, the collection on display consisted of 808 items of antiquities and 384 specimens of Ceylon products. 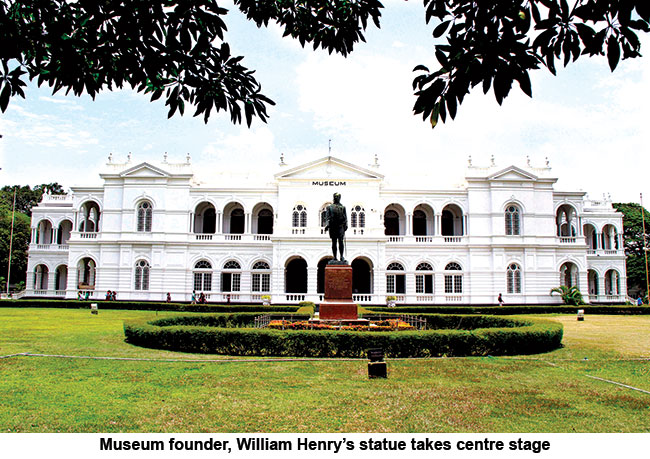 In his memoirs published posthumously in 1894 by his widow Lady Augusta Gregory, the Governor says of the Colombo Museum,” The Museum is a singularly beautiful building — light, bright, and well ventilated. It was strange that nothing of the kind had been previously attempted, and yet all our other colonies united could not furnish such a collection of objects of such varied interest as Ceylon.”

The Museum’s first director Dr. Haly laboured for 26 years with only two officers to give a promising start to the Colombo Museum. Three other British nationals followed before Dr. P.E.P. Deranaiyagala became the first Sri Lankan Director of the National Museum in 1939.

His 23-year tenure in office saw to the expansion of the museum as well as enactment of the National Museum Ordinance of 1942 which converted the Colombo Museum into the National Museum. The building was also extended to house the many artifacts that needed to be put on public display for which there was no room in the original building.

A bronze statue of Sir W.H. Gregory stands tall in the lawn of the museum. It’s unlikely that many visitors today pay much heed to the statue of the man looking out onto the bustling road that runs in front of the museum but his name will remain synonymous with the Colombo Museum.