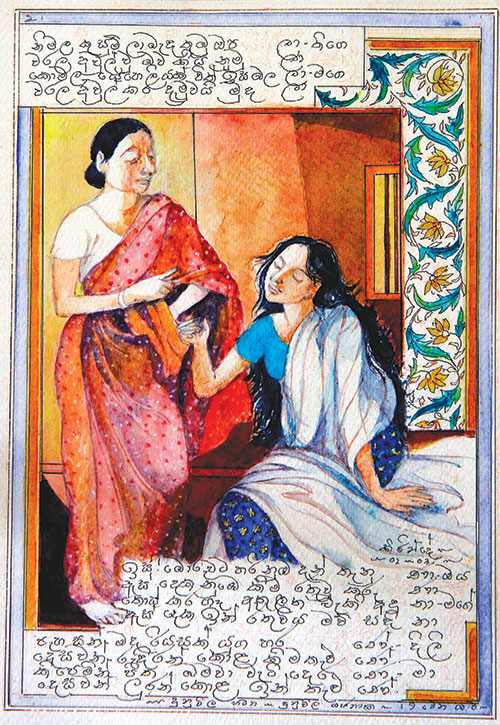 The Dunuvila Hatana – the tale of the Dunuvila family was composed by Dunuvila Gajanayaka Nilame in the early part of the 18th Century. He served in the palace during the period of the last king of Kandy, Sri Wickrama Rajasinghe (1798 – 1815).

The Dunuvila Hatana relates the misfortune of the poet’s family, and tells how Prime Minister Pilimatalavve had his estates restored to them, having been confiscated by the King for the non-payment of taxes. The poet petitions the Prime Minister by sending him an allegorical poem and it informs him of the misfortune of his family. This poem of fifty-five quatrains is said to be ‘fit only for the spirit of youthful passion’. The story begins as a dialogue between a mother and her daughter . The girl has stolen away from her bedroom and spent the night with her lover. The mother questions her, the girl tries to avoid telling her mother what she has done, but in the end the truth comes out. It transpires that the lover was no other than the youthful Prime Minister, Vijayasundara Senarat Abayakoon of Pilimatalavva.The mother being assured that the nobleman loved her daughter dearly, tells her, “it is the way with young men of noble birth to grant the request of young women. Therefore, tell your lover that we have lost our family estate, our titles, and all our wealth, and get them restored to us.” The girl takes the message to the Prime Minister, and he presents the petition to the king and has the estate of Dunuvila and all the honours appertaining to it restored.”

Text taken from Sinhalese Literature by Dr.C.E.Godakumbura printed by the Department of Cultural Affairs.

Celebrated artist Stanley Kirinde’s narrative art of five sequences from Dunuvila Hatana brings to life the conversation between mother and daughter which is at the heart of the poem. Stanley Kirinde, is considered to be one of Sri Lanka’s most outstanding self-taught artists of the 20th century. Working primarily on canvas and paper, his works are part of numerous local and international, public and private collections.

His work had been featured in exhibitions at the Smithsonian Institution (USA), at the Festival of Asian Art – Fukuoka, Japan and in the landmark exhibition of South Asian Contemporary art, Colours of Karma, at the Nehru Centre, London in 2005. 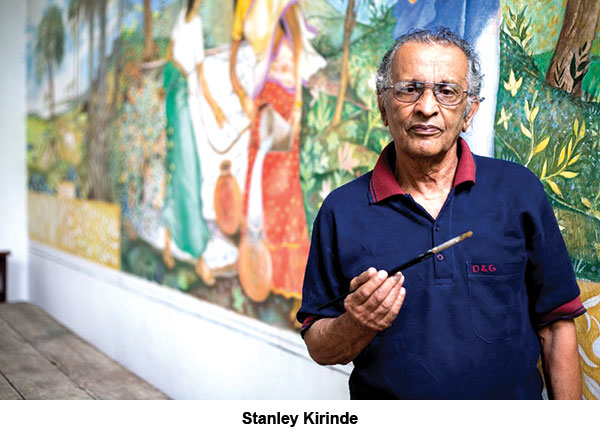 Major works of Kirinde include a portrait of the late Sri K.R. Narayan, a former President of India, commissioned by the Indian Government, mosaic murals for the SL Army and the Kotelawala Defence University and paintings for the SL Air Force and Defence Services Command and Staff College, Batalanda. He is also credited with the restoration of the chapel paintings of Trinity College, Kandy originally done by David Paynter.

In June this year, his painting titled ‘Guttila – the Veena Player’ was unveiled at the World Intellectual Property Organisation (WIPO) in Geneva in honour of former Foreign Affairs Minister Lakshman Kadirgamar.