His music which is forever vigilant…

His music which is forever vigilant…

Gayathri Khemadasa, a versatile musician in her own right, talks to Randima Attygalle, about how her celebrated father inspired her and   entire nation to charter the unknown musical waters and make them their own…

It’s been ten years since Master Premasiri Khemadasa had left the entire world of music poorer. Yet, his music “is forever vigilant and innovative, that it can never be frozen inside the frame of time,” as daughter Gayathri Khemadasa, reflects.

“Like Gandhi, Khemadasa believes that one must keep the doors and windows of one’s house open so that the winds from the four corners of the earth will blow through it- yet never allow oneself to be taken off one’s feet which should remain firmly planted on your own soil. He has therefore boldly used techniques, forms and instruments from the west and east in expressing himself, yet his music is rooted in our folk music,” reflects composer and conductor, Lalanath de Silva in ‘Khemadasa the Winds of Change’ (Master- The Musical Sailor of Timeless Seas). Today, Gayathri with her exposure at the Prague Conservatory and the Academy of Early Music, Czech Republic, is a composer and a contemporary classical pianist, keeps her celebrated father’s legacy alive in her own way.

Confident of doing justice to her father’s creations, Gayathri, who has made waves both locally and internationally, adds with a smile: “thaththa would never expect me to repeat things as a parrot.” Her reproduction of Master’s Pirinivan Mangalyaya, (credited as the world’s first Buddhist cantata), two years ago with the gifted voices of the Sri Lanka Navy, speaks for the fact. Gayathri was only 13 when she first watched her father turning out this exquisite musical delight.

“Once you put an out-of-the-box masterpiece inside a frame, it closes the possibility of opening space for different interpretation,” reflects Gayathri, who, rather than offering definitions to her father’s music, remarks that it is the “gravity of depth in the musical language and the ability to communicate across borders” which is closest to her heart about her father’s genre. As veteran journalist, Ajith Samaranayake once observed, ‘flirtation with western music is no mere bravura performance for him. For Khemadasa genuinely believes that if we are to broaden our aesthetic horizons and enrich not merely our own music but take it to the wider world we have to transcend the national musical boundaries. However, this experimentation on his part has been no indiscriminate or eclectic mix.”

A believer of listening and making the ‘unknown’, ‘known’, Gayathri surmises: “anything is distant when one has not acquainted oneself with the work.” An open mind is an imperative to appreciate any kind of art, says the versatile musician who goes on to note that the experience is less when one goes predicting what to expect. “Let the art take you in its journey and you will be able to go to places you would have never imagined of,” Gayathri offers food for thought. She adds with a smile: “if not for this search for new things, we would be still living in caves, tapping walls and calling that resonance- music!”

The greatness in a composer is in bringing the best out of the genres that one is working with and moreover as Gayathri believes, “in being musically honest in any of them.” This, Khemadasa achieved effortlessly and with such finesse. “My father pioneered in this without any doubt. One only has to listen to his film songs and sound tracks like lasanda, lokuma hinawa and also listen to the sound track of Golu hadawatha, Nidhanaya etc.” 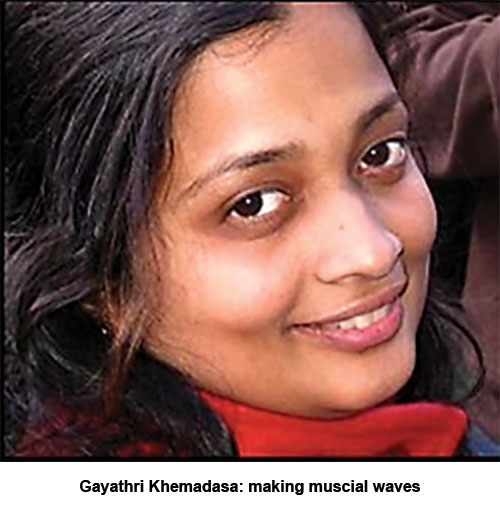 Master Khemadasa’s music transcended national boundaries, race, religion and class. It is in celebration of this all encompassing quality, the Khemadasa Foundation, (a not-for-profit venture initiated by Master to educate the underprivileged youth of Sri Lanka in music and performance) now steered by Gayathri, featured ‘Premasiri Khemadasa Film Festival’ last year. “Thaththa was one of the very few Sri Lankan artistes who never bowed his head down to power or money and treated people equally,” prides Gayathri in her father’s untarnished legacy.

At a time when ‘stars’ are born overnight and fade away equally fast, Gayathri is critical of certain ‘new interpretations’ rendered to her father’s musical labours. “I find most interpretations done without much or no thought. One should first try to understand the music, the lines, the spaces and the silence the composer has used and for what purposes. Then only should a person attempt to do one’s own version of it.”

Growing up with a father whose stardom neither ‘moved’ him nor made him loose his common touch, had left a perpetual bearing on Gayathri and sister Anupa. To say they carry their father’s gene is an understatement. “It was amazing, energetic, loving and thought-provoking,” is how Gayathri reminisces her formative years under his wings. “He has influenced me to think differently of sound, not just the music in sound and to constantly push barriers of musicalthought in my work.”