My journey to Hansa Vilak

My journey to Hansa Vilak

I fell in love with cinema almost by accident. As I was growing up, Sri Lankan films I watched generally had a set format: the mandatory song and dance, the jokes, the girl, the boy, the villain. They fought valiantly. The comedians made us laugh. The dancers were entertaining. But at the same time, we also watched a few vastly different – more artistic movies and these stood out. These were less superficial than the ones we were used to.

As far as possible, I exposed myself to a different genre of movies. The name of Lester James Peiris became ingrained in my mind as a film maker who made this type of movies. In the 1960s, foreign films started to appear in Sri Lanka. Amongst these foreign film-makers, the one who stole our hearts and minds was the esteemed Indian director, Satyajit Ray. It was through Lester James Peiris’ creations that we acquired the art of appreciating the cinematic artistry of these film makers. We had only watched Rekawa, now we could watch Pather Panchali.

With this, I was pushed into the ranks of film-goers who preferred to watch good, artistic films. In my late teens, I was fortunate enough to watch the screening of a short film that left a lasting impression on me . It was the Polish film Passenger. In my mind’s eye, I can still visualize prisoners being taken to an underground Nazi gas chamber. A small child who was in the crowd of prisoners begins talking with an armed Nazi soldier. The soldier plays with the child. But in the end, the child also gets locked inside the chamber. These scenes were embedded in my memory. The power of capturing real life situations into cinematic art was brought to life in my world by this Polish film. I went searching for the name of the director. The film was directed by Andrzej Munk. Since then I have been a fan of Polish and Czech cinema.

In the early 70s, my job brought me to Colombo on a daily basis. Theatre soon became an indulgence just as much as cinema. I bought an old 16mm projector on an installment payment basis. This projector became my guru of cinema. The French, Canadian and Russian embassies lent their 16mm film copies to me. Two reels of film weighed around five kilos. Premasiri Khemadasa, Vasantha Obeyesekere and Dharmasena Pathiraja used to visit me at home to watch these films.

My love for Polish, Czech, Russian and French cinema grew over the years. The Czech Consulate had only 64 films, all of which I watched multiple times. It was my ‘projector guru’ that helped me study and understand screen writing, cinematography, editing and directing.

Around this time, I had the opportunity to act in films directed by Dayananda Gunawardena, Lester James Peiris, Parakarama De Silva and Sunil Ariyaratne.

The experiences I had as a stage director fuelled my urge to direct a film. In 1978, I wrote a screen play. I wanted to visit the social construction of a marriage from a different perspective. This is how I ended up writing Hansa vilak. I based the screen play on my own life experience that took place five years into my marriage.

The screen play was woven around four characters – some aspects of these characters were based on reality, others on fantasy. I was able to develop these characters whilst transcending the traditional ‘beginning’, ‘middle’ and ‘end’ construct known to films at the time. Hansa vilak was based on a structure that was yet unseen in Sri Lankan cinema and I believe that this has been the lasting appeal of the film. Hansa vilak is still considered to be a modern and a relevant film. It hasn’t aged. 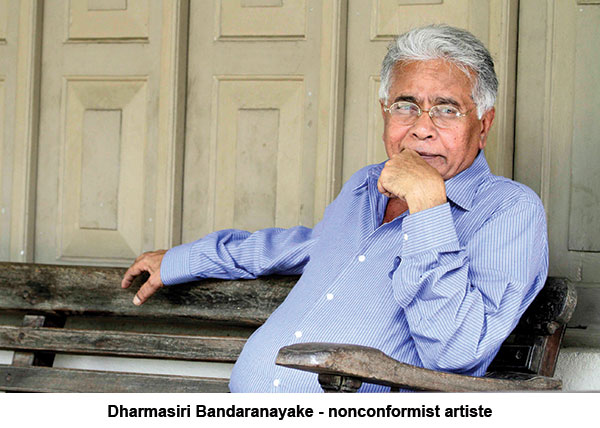 Whilst writing the screen play, I made great effort not to include a fifth male character into this four – person dynamic. Had I introduced another character, it’s very likely the fascination that the audience has for this film would have been lost.

Fantasy and relasim merged effortlessly so much so the audience was gently pushed into a discussion on what was real and what was not.

My own portrayal as Nissanka was not by choice. However as most actors I approached were reluctant or had scheduling difficulties, I was pushed into taking on the role myself! I am told that I have done justice to the character. At the first screening of the film, Fr. Earnest Poruthota was in the audience. He was so appreciative of the film that he took it upon himself to send it to the Mannheim International Film Festival in West Germany in 1979. The film festival was focused on novice directors around the globe and I was part of it. Hansa vilak won appreciation from an discerning audience.

More valuable to me than any award won on the international or local stage, is the continuous positive appreciation of Hansa vilak by the Sri Lankan audience. To date, whenever this film is shown on television or at a film festival, people still share their perceptions of the film with me.

The melodies by Master Premasiri Khemadasa, still echo in their ears. The continued success of the song Heminsare Piyavida attests to this fact.

One of our most acclaimed cinema critics , Dr. Reggie Siriwardena wrote to the Lanka Guardian in 1979: ‘ To have found the means of reflecting through the form and techniques of the film, the pressures of society and the family in the mind of a bewildered and tormented individual is Dharmasiri Bandaranayake’s great achievement in the film. That achievement is sufficient to make Hansa vilak a permanent landmark in Sinhala Cinema, just as Rekawa or Ahas Gauwa were in their own time”.

Hansa vilak was featured as part of the Festival of Films from Sri Lanka in Pune, India in August this year at the National Film Archive of India.

The writer is one of Sri Lanka’s celebrated filmmakers and playwrights. His work remains timeless, often featured at international cinema and drama festivals.