Promising young cricketer Roshan Mahanama was mentored by his parents, to leave the playing field at the end of the day with ‘collars down’ and walk away as any other ordinary Sri Lankan boy would. His gurus at Nalanda College and his first cricket coach, Mr. Nelson Mendis spurred his upbringing founded on humility. Looking back, the internationally acclaimed cricketer he is today acclaims: “more than the personal glory, what matters to me is the collective effort of making the country proud.” For Mahanama, the individual landmarks, partnership records and celebrity standing dwindled into fleetingness in the wake of the larger cause he was to serve as a ‘team man’ he is reputed for.

Watching senior Nalandians in action including Sri Lanka’s first Test Captain Bandula Warnapura, ignited a spark in young Mahanama to carry the Lankan flag high. A born sportsman, rugby and athletics were also very much under his belt. A cricket scholarship to Lords at a decisive juncture of his school career saw no ‘looking-back’ for the national icon to be. “My parents were so liberal minded that they allowed me to live my dream unlike many parents of the time, who aspired to live their dreams through their children.” It was a ‘gamble’ as Mahanama sees it today, to tread a path when the game attached no monetary strings but only pride in playing for the country. Yet, chasing his dream had paid the dividends, he says with a smile.

The World Cup victory, the most exhilarating collective memory of our contemporary history, came about during one of the most critical and volatile periods of the country as Mahanama observes. This made the victory even more momentous he says. “It was a time when the national cricket team could bring on a smile and hope to fellow Sri Lankans in an otherwise bleak period. There was solace found in the game whether we won or lost. Moreover, the victory opened the eyes of so many across the world when negative vibes were emanating about the image of the country. I remember being part of a press briefing where some South Africans didn’t know where Sri Lanka was on the world map then!”

It was ‘our style, our way’ which took the world by surprise 22 years ago, reflects the ace player. “When the world proclaimed that Sri Lankans were playing their own brand of cricket, it was all about our signature values as a nation at their best. We defied the conventional play and believed in our own style, as what mattered to us as a team was what was best for the country.” Countries supporting Sri Lankan Cricket at this juncture, as Mahanama points out, was a clear acknowledgement of the ‘authentic Sri Lankan style’ of playing the game. “The story is not about the 11 players who made it to the field that day, but each and everyone- the reserves, the coach, the manager, the physio, the administrators and everyone else who played a role behind the stage,” he adds. 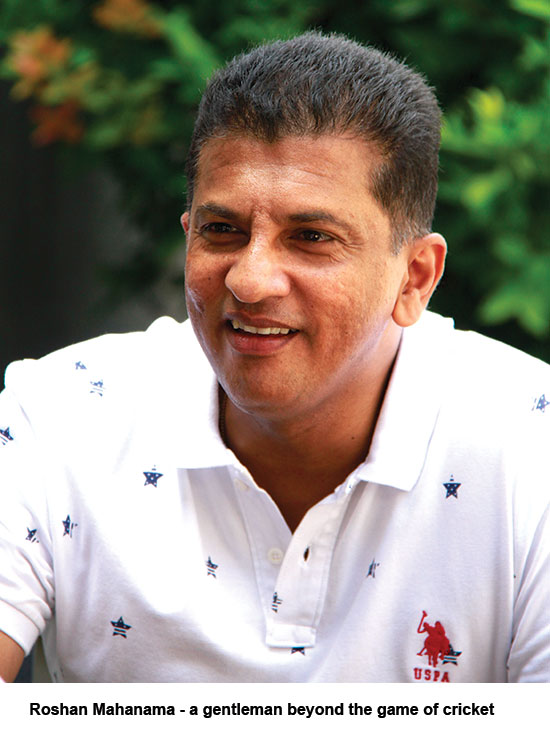 Contrary to the popular conviction at the time that ‘no World Cup had ever been won by batting second’ Sri Lankans opted to do it their way by chasing a score, speaking for the faith in one’s own strengths and the collective will. Urging his fellow countrymen to translate this shift of mind to all aspects of the country, the topnotch player avers: “going towards a goal as a team garners more than working towards it all by yourself. Focus on your strengths rather than on the opposition and if you are called to walk an extra mile for your country, don’t say it’s not your role.”

Navigating two phases of local cricket where players had to perform a balancing act of the game and a career and later emerging as ‘professional cricketers’, Mahanama prides in the fact that his predecessors and his contemporaries could adapt to the demands of the game at each stage. “It was a tough game, keeping our employers happy and at the same time juggling the sport.”

Reflecting on the transition from a group of “amateur, semi-professional” cricketers to world champions, Mahanama surmises: “cricket is an expensive game and the majority of the players who had taken up the sport, come from humble backgrounds. Coming from a small country with limited resources, what we have achieved in cricket is significant and we owe a lot to our predecessors as well. Since the country received Test status in 1982 to date, within a matter of 36 years, we have achieved what England had not achieved, having invented the game. To list a few of our achievements, we have won a World Cup, a T-20 World Cup, we have made it to three World Cup finals and three T-20 finals. We can boast of the highest ever Test score and the highest wicket-taker and the highest ever partnership in the history of Test Match Cricket to date. We are second to none in the world.”

For Mahanama, his 12-year stint as an ICC referee on an elite panel is not a feather in his cap, but that of the country. Mahanama, together with the former Sri Lankan skipper Ranjan Madugalle, put Sri Lankan Cricket in history books once more as the only two ICC referees of an elite panel (consisting of only seven referees) drawn from a single country to date. “When I was given the job, two things crossed my mind: I couldn’t let Ranjan down and I had to leave doors open for other Sri Lankans. ” The exposure, Mahanama says, was one of the best things that ever happened to him. “Although I stepped down after 12 years on a matter of principle, I believe I did justice to the job that was entrusted upon me and delivered the goods,” he smiles.

Instilling a sense of pride in doing the duty towards the country coupled with discipline can boost the international image of Sri Lankan Cricket, maintains the world class player who has walked the talk. Disheartened that the game has been highly politicized, the world champ reminds all sportsmen and women that they embrace the common tag of a ‘Sri Lankan’ beyond national borders. “Moment you tarnish your image across the borders, it is not your individual identity that matters but the fact that a Sri Lankan has done so. Whatever the sports you represent, you become an ambassador of your country more than any other. Having the lion on the forehead or chest will not do unless you safeguard the pride of the lion.”

While setting high standards and dreaming big, comprehending the real purpose in life is imperative, reflects the world champ. “We are here to achieve a certain amount in life and accumulate a certain amount of wealth but, crossing the boundary line would mean compromising human values of friendship, discipline, loyalty, honesty and integrity.” The trailblazer he is with a warm smile to offer anyone who crosses his path, Mahanama remains rooted to the Lankan soil. “In the Giving Index, we are among the top six nations, we rally around in adversity much faster than any other country and we are still a nation of people using a fewer muscles to smile than exhausting more to frown!”