The call of the caves

The call of the caves 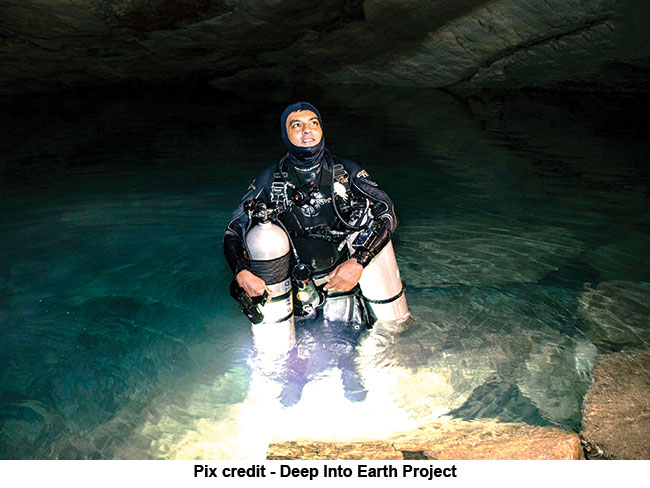 A cave will do its best to kill you.

If you are not prepared, physically, mentally and ready with survival gear needed to deal with the challenging and hostile environment in a cave, it will eventually exploit your first vulnerability. Then it will kill you.

Recently, cave diving captured the interest and imagination of the world when a group of young boys from a Thai football team was trapped in a cave for two weeks. While they were deep within the cave, heavy rain had flooded the exit, confining them to a small ledge. It required a massive international effort with over 1000 rescuers to extract the boys out safely. One of the rescuers, a former Thai navy seal, perished in the attempt after running out of air. In such an unforgiving cave, it was indeed a remarkable accomplishment to have been able to bring the entire team out safely with only a single casualty.

I am no stranger to caves in Thailand. As part of an intense two-week course in cave diving and in other explorations done later, I have dived dozens of caves located in the Nakhon Si Thammarat province in the deep south of Thailand and in KhaoLaem National Park, northwest of Thailand near the Burmese border. Cave diving is one of the most dangerous forms of SCUBA diving, requiring specialized gear and training that is far more technical and intense than recreational SCUBA diving. Cave diving training mainly builds mental fortitude to remain calm while diving through zero visibility water and wriggling through claustrophobic restrictions. It is no place to lose your mind in panic.

As a shipwreck explorer, unravelling mystery wrecks of the deep, I had no intention of becoming a cave diver; but I needed to acquire skills that would safely allow me to penetrate the dangerous innards of a shipwreck, which presented exploratory challenges very similar to caves. However, after undergoing the training and exploring many of the exotic cave systems in Thailand, I was hooked! Walking through mosquito infested tropical jungles, wading through mud, crawling on all fours through low hanging rock and bat guano, painfully dragging your SCUBA gear around,just to look for underwater caves had a strange and irresistible allure. 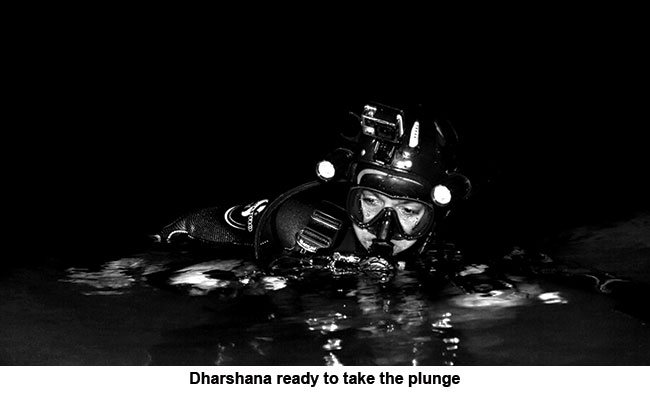 All this lead to the inevitable question “Are there underwater cave systems in Sri Lanka?”I started to search. At the time, Sri Lanka had several dry cave systems that were quite famous; for example, Wavulpone ,Belilena, Batatotalena and Mahalenama. However, none of these seem have extend underwater, presenting any opportunity for cave diving.

Then, in June 2017, I received some intriguing pictures from a friend. It depicted an underground pond known as the Nil Diya Pokuna (Blue Water Pond), situated in Ella. No one knew how deep the pond was and if the cave continued underwater. I decided to investigate.

A month later, accompanied by three friends, I travelled to Ella. Here, I met our guide Meththa (Meththananda) who told me that, in 2001, while exploring the jungles near his village with a friend, he found an opening into the mountain. A few days of gradual exploration then lead to an amazing discovery, a hither to unknown underground pond, deep within the bowels of a mountain situated a few kilometers across the famous Ravana falls in Ella.

Reaching the Nil Diya Pokuna was an adventure unto itself. Our starting point was ‘Base Camp’, the residence of one of Meththa’s associates situated by the forest where the cave entrance was. From there, we trekked for one-and-a-half hours through the forest before arriving at the ‘entrance’ of the cave. The term ‘entrance’ really was an understatement, because we were really peering down a deep narrow hole that was barely larger than the girth of an average person! I literally felt like Alice about to enter wonderland and for this reason, later named the entrance the ‘Rabbit Hole’. After mustering up enough courage, all four of us carefully rappelled down a rope into the rabbit hole. It was a direct 15-feet drop past jagged rocks before we reached solid ground. Then, in darkness, we had to squeeze through another tight restriction into a chamber below. It then kept winding down into another narrow space, which required one to crawl on all fours. From this point, thankfully, the cave started becoming larger. On the way down, we encountered various life forms including bats, grasshoppers and an annoying swarm of flies that, attracted by our lights, incessantly flew into our eyes and nostrils. 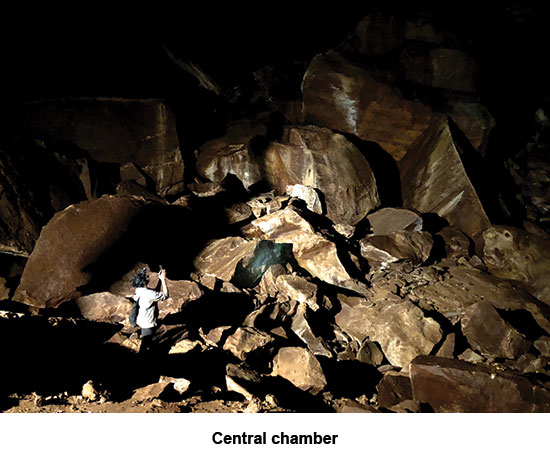 About half an hour of clambering down slippery bat guano drenched surface, brought us to an amazing place, a super massive central chamber that could easily house a five-storey building within its cavernous confines! Here we took a well-earned respite and marveled at the magnitude of this cave situated 60m below the surface of earth. Then we continued our journey, climbing down below for another half an hour before we reached the Nil Diya Pokuna, 80m below the Rabbit Hole.

It was an amazing sight! A beautiful natural rock pool, the size of a large swimming pool, nestled within a spacious rocky chamber. My bright torch pierced the placid blue water to reveal jagged rocks beneath and I felt rather disappointed, as it did not appear deep enough to SCUBA dive. However, there was only one-way to find out. Donning a diving mask, I plunged into the pool. It was freezing cold at 24C.

Despite this, I swam to the far side of the pool, my splashes eerily echoing in the cave chamber. At the edge of the pool, I took a deep breath and dived in, swimming down about 10 feet while lighting up the periphery of the cave. What I saw amazed and elated me! The cave appeared to be continuing underwater as far as I could see! I could hardly contain my excitement!

A week later, I was back in the cave! This time I was ready with cave diving SCUBA gear. It was quite a challenge to get the gear all the way down to the pond but Meththa had a great support team to help. I geared up in side mount SCUBA configuration, which is ideal for underwater cave exploration. This required me to carry two SCUBA cylinders and a host of other equipment including backups.

Then I plunged in, entering a realm no human been to before.

It was a surreal experience. The water was crystal-clear and the beauty of the underwater rock formations exhilarated me! I slowly swam into this different world, away from the surface of the pond. To find my way back, Installed a guideline on the rocks. I swam deeper and longer into the cave, illuminating the way with my dive torch and soon reached the deepest point underwater at 23m of depth (75 ft).I looked around in wonder to observe a vast, multi shaped, multi coloured rock formations everywhere. A serene sense of peace and tranquility descended upon me. There was no other life here and the water appeared dead sterile. Alone, I was in a place no human had been before.

Continuing on, I approached a rather narrow pass. Here, the troubles started. Unlike at near the surface of the lake, the rock for mations here were porus and soft. The bubbles from my exhalation affected the roof of the cave and a flurry of rocky flakes started raining down, reducing the visibility to near zero. In addition, the water temperature dropped down to 23C, a mind numbing cold as I had underestimated thickness of the diving suit required for these conditions. To make matters worse, I became entangled in my own guideline and went through some tense moments untangling myself in zero visibility caused by disturbance of bottom sediment and falling rock flakes from the roof. If not for the guideline, I would have never been able to make it back. Forty four minutes later I was back at the surface of the pond, and despite the cold, dived back into explore a different part of the cave.

Since that first expedition, I have now dived the cave a half a dozen times. In each dive, I have laid several permanent survey lines deep into the cave in two different directions along the wall of the cave. The left survey line is Ravana Maga (Ravana’s way) and the right survey line the Sita Maga (Sita’s way) after the legends and folklore that surround these mysterious caves in Ella. Between these two lines,is a cavernous underwater space, linked by yet a third survey line I have laid. Both Ravana Maga and Sita Maga continue on deep into the ground and yet, I have not discovered an end to this magnificent underwater cave. I suspect that it may even continue underwater for many kilometers.

As Sri Lankan’s only known extensive underwater cave system to date, this was a significant discovery. I will not be surprised if our nation’s thick jungles and inaccessible mountains harbour many other wondrous caves underground and underwater.

Therefore, it is up to all of us to heed the call of the caves.A call to explore and to discover these marvelous natural creations that are sure to fill us with wonder and amazement.