A NAVIGATOR OF MANY A BUSINESS CLIMATE

A NAVIGATOR OF MANY A BUSINESS CLIMATE 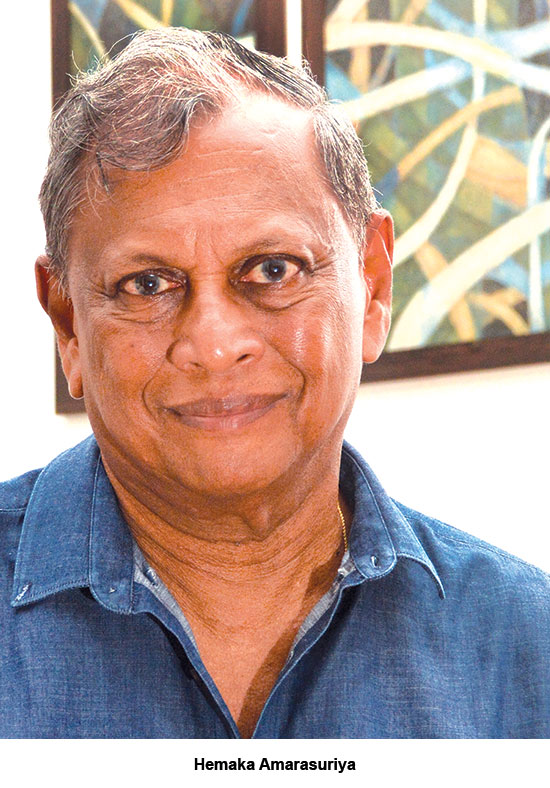 One of Sri Lanka’s most respected corporate leaders, Hemaka Amarasuriya, calls for the inherent Sri Lankan spirit in every sphere to be taken to the next level through collective visionary thinking. The immediate past Chairman of the Sri Lanka Insurance Corporation, Amarasuriya moots bridging the gap between the state and the private sector to sustain the Sri Lankan skill second to none in the world…

Amidst a large family of five sisters and two brothers came Hemaka Amarasuriya in 1943, born to Thomas and Lucille Amarasuriya. A kind of a ‘loner’ in the middle of a large family, young Hemaka grew up nourished by true traditions of philanthropy his parents represented. While his paternal dynasty was credited to have run nearly 40 non-profit educational institutions in the South including Mahinda College which the family founded, Amarasuriya’s mother, a devout Buddhist and a robust social worker,steered scores of social service projects of the time and her father, Amarasruriya’s maternal grandfather, was the founder and benefactor of Moratuwa MahaVidyalaya.

A ‘right Royal’ product since kindergarten, Amarasuriya not only learnt of books but ‘also of men’ rubbing shoulders with sons of Cinnamon Gardens’ business magnates and less privileged boys. Cricket and Rugby were also to the young Royalist’s credit. “Royal was a melting pot of diversity, contrary to the elitist label it is attached. We learnt social and cultural tolerance at Royal,” reflects the corporate leader he is today. This upbringing was only fuelled by a society of empathy his generation grew up in, says Amarasuriya, who translates the values he grew up with to his professional life.

Nourished by the best of both worlds, young Amarasuriya’s father’s race horses in Boossa in the deep South, the plantations they owned and softball cricket with village boys, fed his imagination in his ancestral Southern setting. “My family never confined their associations to one segment of society,” says Amarasuriya who fondly recollects the kadalaachchi, milk toffee seller, godamba roti cart and the Chinese Noddle man on a bike knocking on his door. They coloured his Colombo life of ‘old Ceylon’. An era marked by the Galle Face Green ,the Fountain Café and sea-bathing at Mt. Lavinia, it was a life without “unnecessary burdens” and digital devices as Amarasuriya adds with a smile. “We didn’t have to fight for time with traffic on the roads, the parks were full of life in the evenings and lanes were filled with laughter of children playing. It was a time when wisdom was beyond Google!” The Park Road, Colombo 5 (his residence since 1955) of yesteryear as Amarasuriya mourns, no longer has boys playing cricket every afternoon, nor is the public playground facing the lane permeates an air of life . “In the name of development, all these places are now invaded as dumping yards,” he laments.

A corporate leader who brings with himself a wealth of experience from banking, retail, manufacturing and insurance, Amarasuriya is disheartened that the Sri Lankan skill, which is on par with any other developed nation, is “stifled by hierarchy”. Urging for an ‘entrepreneurship culture’ where young talent could flourish, the business leader calls for state-private collaborations to hone the skills of the youth. Critical of the ‘wide gap’ which exists between the two sectors, Amarasuriya surmises: “there should be a mechanism to cater to different levels of skills for which training schools by the private sector are imperative. It should be remembered that the private sector is going to be the creator of jobs as the government sector is downsizing now.” The former, however, as Amarasuriya puts it across, is “not a paragon of virtues” as the sector may like it to appear. “It should not be forgotten that the state sector has more equity and also employees of quality. Privatizing of the state bodies is not the answer but to make the right selection to the Board of Directors, which sadly does not happen right now.”

Sri Lanka’s strategic location with close proximity to largest Asian economies should be more exploited reflects Amarasuriya who had navigated diverse phases of the Sri Lankan business climate. “Many global businessmen of my vintage have concluded that Sri Lanka is the hidden gem of the ancient, waiting to emerge. But when will that happen?, questions Amarasuriya who charges that apart from hotels and apparels which are moving beyond local shores, the remainder largely remains lackluster, with a few ‘niches’ to claim.“The lack of manufacturing strength prevents us from selling branded and built-up products on our own. The way forward in that case is to have pacts and sub-contracts manufacturing with regional players and even with the Middle East and countries in East Asia and Australasia where there is a significant population of those of Sri Lankan origin.”

Be it in business, sports or otherwise, the inherent Sri Lankan spirit, as Amarasuriya maintains, needs to be revived. “Today the country lacks inspiration. We are a nation that has countered invasions, rebellions, insurgencies and wars thanks to our indomitable spirit. This very spirit sadly has not been captured at the next level and with visionary leadership it is waiting to arrive.”

Very much an integral part of the happiest collective memory of our nation’s contemporary history- the World Cup victory of 1996, Amarasuriya is only humbled by his ‘innings behind the curtain’. Then the Chairman of Singer Sri Lanka, Amarasuriya’s faith in the national team was “almost a business gamble” as he puts it across. “When Singer SL came forward to sponsor the team, they were at the bottom of the table and before the end of the year they were on top of the world. Given the chaotic and volatile period the country was navigating at the time, cricket was our only solace,” recollect Amarasuriya who credits the then President of the Sri Lanka Cricket Board, Ana Punchihewa, the national coach, Dev Whatmore and the physio Alex Kountori for the cementing the whole exercise with Arjuna Ranatunga.

His passion for the game as Amarasuriya avers, further ignited his drive towards the cause. “Cricket had always been part of my life. Although I came close to making it to the First-11, my son Thushan captained the Royal College team. My father, my uncles, all played the game in school. It’s a game close to my heart.” Disheartened that Sri Lankan Cricket has lost its spirit, Amarasuriya charges the administrators and more so the selectors for “destroying the game.” “In England, Australia or India, not only the player concerned, but even the public has the right to know why a player is dropped from the team because that is the ethic and the national team is considered a national asset. Here, there is absolutely no voice. Players do not know why they are dropped and are left betrayed, bewildered and dejected, leading to the downward trajectory of their otherwise promising careers. This is the worst time of Sri Lankan Cricket.”

A trendsetting business leader, Amarasuriya is charmed by the ‘free-natured’ Sri Lankan spirit. “Despite adversity, we still remain a smiling nation and as islanders, we largely don’t live for the future but enjoy the moment in hand and no one can pull us down!”