FOR THE LOVE OF CLASSICAL DANCE

FOR THE LOVE OF CLASSICAL DANCE 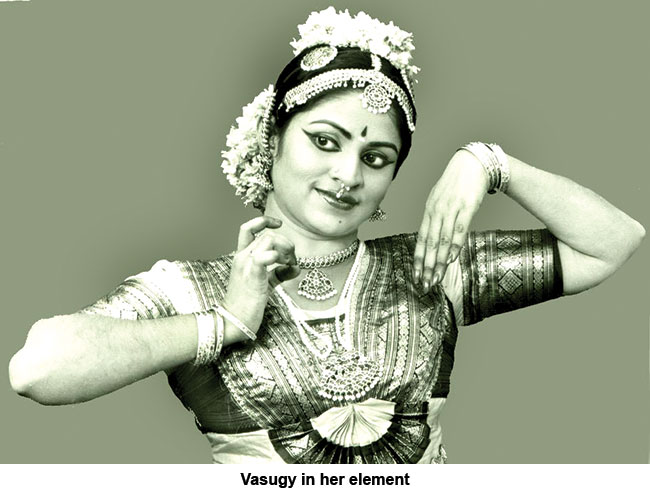 Kalasuri Vasugy Jegatheeswaran is the trail blazing daughter of a trailblazing mother. Growing up in a home with the sound of the cymbals echoing all around, the sound of feet moving rhythmically and her mother’s voice guiding young dancers, she took to Bharatanatyam dancing literally like a duck taking to the water. Vasugy was just three years old when she joined the others in her mother Srimathi Vijayalakshmi Shanmugampillai‘s dancing class. That was more six decades ago, but for her there has been no looking back.

“My sister, two brothers and I grew up in a home where dance and music were the staple. My mother and father were both artistically inclined and hence we also developed an early love for the aesthetics,” Vasugy says.

Today she is the holder of multiple honours conferred for her both in Sri Lanka and abroad, for her contribution to the classical dance form as well as to Carnatic music. The crowning glory among her awards is the prestigious title of Kalasuri which was conferred upon her in 1990 by the late President Ranasinghe Premadasa.

Her mother Vijayalakshmi Shanmugampillai was a pioneering teacher in Bharatanatyam and Carnatic music in the country, having taken to dance at a young age. She had studied both in Jaffna and then in India and taught at the Ramanathan College in Jaffna in the 1940s before moving to Colombo after marriage.

“My parents were both pioneers in their own way. My father Shri K. Shanmugampillai was a pioneer in introducing classical music at the Sri Lanka Broadcasting Corporation (SLBC) where he was employed. My mother too joined him at the SLBC (Radio Ceylon then) after their marriage. They were among the group that introduced aesthetic studies to the school curriculum in the country which helped promote classical dance and music at the school level.”

Vasugy, after having her early introduction to dance and music from her mother, too proceeded to India to further her knowledge in Bharatanatyam and Carnatic music and studied under several leading dance masters there including Srimathi Gauri Muthu Kumaraswamy, Tanjore Smt. Jegathambal, Padmashri Adyar K. Lakshmanan, among several others. She returned from India with a Diploma in Dancing and Nattuvangam, the form of rhythmic recitation which accompanies Bharatanatyam performances.

Vasugy says that learning music is as important to a dancer as much as learning to dance. “My mother would tell me that dance and music are like the two tracks on a railway line meaning one is incomplete without the other.” 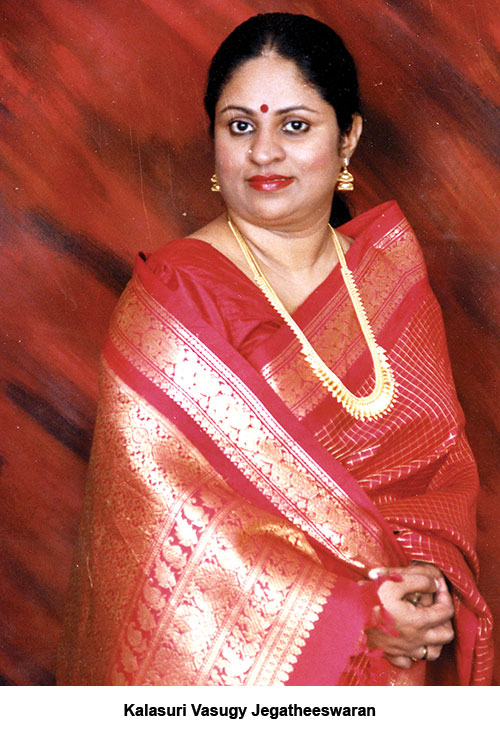 After returning home in 1976, with the support of her parents, she took over the dance school her mother founded more than forty years earlier and named it Natya Kala Mandir which she continues to head. “I was nervous about becoming a dance teacher and running a school, but my mother encouraged me and told me not to be afraid and take up the challenge. With her support and that of my family, including my sister who was a dance teacher herself, I managed to go from strength to strength. After marriage, my husband too encouraged me in my work and my son too has been a pillar of strength.”

Several hundred students have leant Bharatanatyam from her during the years and many continue to flock to her classes “Over 100 of my students have performed their Arangetram, which is the debut on-stage performance of the students and which follows at least four to five years of training or even longer. There is a growing interest in classical dancing among all communities.”

In addition to this, she and her students have held over hundred stage shows and over 60 dance dramas travelling to many countries to showcase their talents.

“Dance and music help us to showcase our unique culture and we are all ambassadors for our country.”

Vasugy’s hard work and her strive to excel in her craft has not gone unrewarded and many accolades have come her way over the years that they are far too many to count. In addition to the National Honour of Kalasuri conferred on her, she was conferred the title Nadana Kalai Arasi in 2006 at a ceremony in Chennai, India by the world removed exponent of Bharatanatyam Dr. Padma Subramanian who herself is the receipt of the Padma Bushana, the third highest civilian award conferred in India .

Her work has taken Vasugy and her students far and wide and the performances she recalls are the ones at the South Asian Association for Regional Cooperation (SAARC) conference held in the Bangladesh and at Expo’86 held in Vancouver, Canada.

In addition to being a teacher at a leading girl’s school in Colombo, Vasugy also works closely with the Indian Cultural Centre in Colombo.

One of their latest performances was at the 4th International Ramayana festival organized by Indian Council for Cultural Relations where senior artistes of the Natya Kala Mandhir performed in New Delhi to much acclaim. The dance drama titled, Sri Rama Kavya was choreographed and produced by Vasugy and her students and told the story of the Ramayana from a Sri Lankan perspective.

“The idea behind the Ramayana festival is to experience the impact that the epic tale has had the world over. For us in Sri Lanka, the story is closer to home and partly set in our land and hence it was a unique opportunity to tell the story from a Lankan perspective.”

Kalasuri Vasugy is not resting on her laurels despite her achievements over the years. “My work takes a lot of hard work and dedication. It’s nearly 30 years since mother passed away and I carry on her tradition,” she says.

She wants to live and work according to her motto. “Leave nothing but your foot prints… keep nothing but your sweet memories….” and continue with her dance and music so she can bring joy to audiences not only here at home but also worldwide.