From stars to oceans – The undersea adventures of Arthur C. Clarke

From stars to oceans – The undersea adventures of Arthur C. Clarke 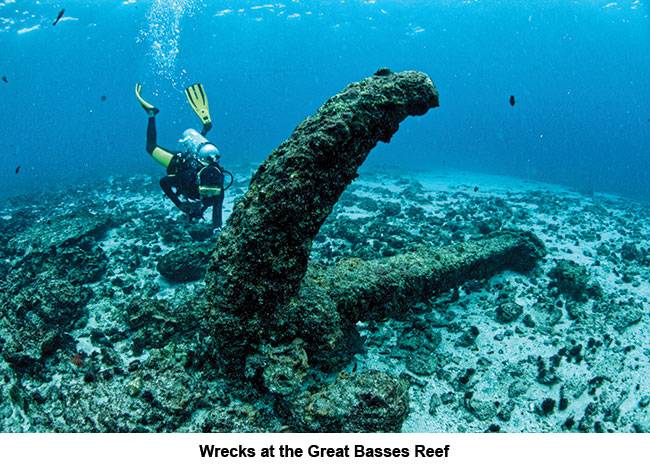 “How inappropriate to call this planet Earth when it is clearly Ocean” – Arthur C. Clarke

Arthur C. Clarke, a name that evokes visions of worlds beyond, a name synonymous with human kind’s aspiration for space exploration.

There are good reasons for that. From the massively influential Sci-Fi epic2001: A Space Odyssey, to the exquisitely crafted and award-winning novels such as Rendezvous with Rama, Clarke has been able to, with incredible flights of imagination, create feelings of awe and wonder in his reader. This ability had earned him fame as the ‘Prophet of Space Age’ and one of the ‘Big Three’ in science fiction, along side Issac Asimov and Robert Heinlein.

However, a lesser-known fact about him is that, once, he was an avid ocean explorer.

In 2005, in the early days of my life as a SCUBA diver, I heard of an exotic and unique dive site called the Basses Reef. Situated far in the ocean, about 20km southeast of Kirinda, its vast extent was marked by two historic lighthouses,the Great Basses Lighthouse and the Little Basses Light House. The British hastily constructed these in the 19th century to prevent ships from running aground on this shallow but deadly reef. For divers it was known as a place of beauty and danger, with limestone caves and ancient shipwrecks coupled with strong currents. Before diving there, I was told, I should read the Treasure of the Great Reef by Clarke. This I did, and was amazed to learn of the adventures of Clarke, as SCUBA diver in the 1950’s. The book described their discovery of silver coins from a wreck at Great Basses, which turned out, belonged to Aurangzeb, the son of Moghul Emperor Shah Jahan, the creator of the Taj Mahal. This book is a classic in contemporary Sri Lankan history, with healthy doses of Clarke’s wry sense of humour, and shedding light on a bygone, yet delightful era in Sri Lanka. It also documents the epic undertaking by Clarke and the movie-maker Mike Wilson to recover the treasure from the bottom of the ocean and identify the origins of the wreck. However, not all went well. In one of the dives, Clarke suffered paralysis, later diagnosed be the onset of polio, forcing him to stop serious diving. Yet, finding the weightlessness of SCUBA diving a great relief for his condition, he continued to do shallow SCUBA dives until in March 1992. 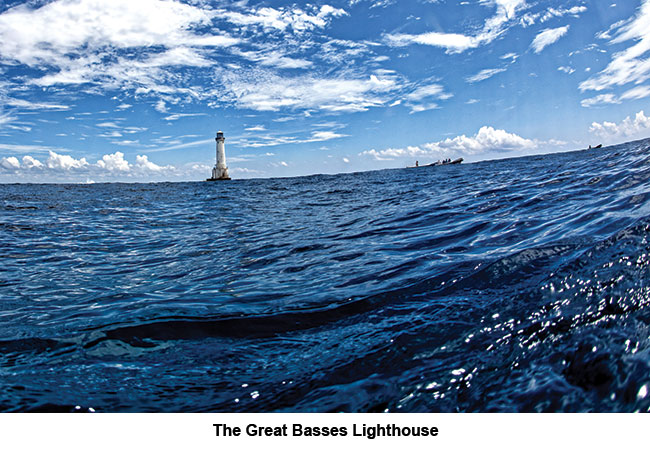 Clarke’s forays into SCUBA exploration began much earlier than the adventure at Great Basses. With Mike Wilson, he spent two years exploring the Great Barrier Reef off the coast of Australia in the 1950’s, resulting in The Coast of Coral, another excellent read. After Australia, Clarke and Wilson returned to Sri Lanka for more diving adventures, which became the topic of his next book, The Reefs of Taprobane. Their adventures at Great Basses followed and based on that experience, Wilson and Clarke went on to produce the iconic movie Ranmuthuduwa (the island of pearls) in 1962. This groundbreaking movie was Sri Lanka’s first underwater and first colour, full-length, film. It was shot at the Great Basses reef and is a dramatized story around finding an underwater treasure, obviously a tale inspired by their own find at the reef.

It is an overcast day at the end of the southwest monsoons. I am in a small fishing boat, heading northwest from the shores of Dehiwela. As an underwater explorer, I am always on the lookout for new wrecks, and today, was another of those days when I was in pursuit of a lead. The leads come from the fishing community, whom I maintain close contacts with because they are the best source of information when it comes to finding wrecks. They often discover new wrecks because their nets or lines entangle in unknown submerged objects. When they do, I get the approximate GPS location from them and conduct a search, which involves both sonar and actually diving into investigate. Most of the time it turns out to be a false lead, but occasionally I strike gold, figuratively.

Today would be such a day. A sonar scan in the area 11 km west of the Kelaniya River estuary, where the wreck was supposed to be, indicated the presence of a large object below the surface! Excited, I quickly dived in and was elated to find a medium sized shipwreck, perhaps about 30m long. A large school of Blue-Striped Snappers enveloped the wreck. The wreck itself was crumbling with age but remained reasonably shipshape. I swam around and documented the wreck by taking photographs and a video footage. 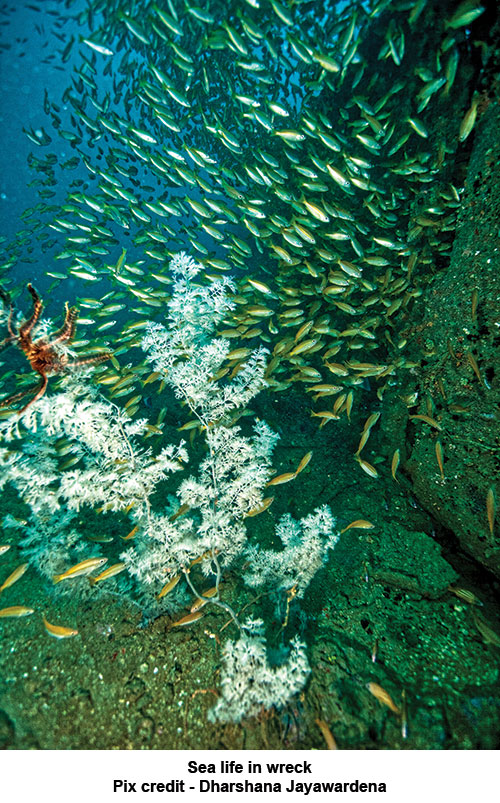 Back ashore and home, I shared the footage with another diver. He pointed out that this looked like the wreck where Clarke had done his last dive and sent me a YouTube movie link. It showed Clarke, almost 75 years old, happily swimming around a wreck off Colombo in March 1992. By carefully comparing the old and the new footage of the wrecks, I concluded that I had just located the wreck Clarke had done his last dive 23 years ago!

In my formative years and as an avid reader of science fiction, Clarke’s work had a tremendous influence on me. Perhaps the explorer in me today, was largely the product of his writing on space exploration. Therefore, it was a great privilege for me to name this mystery wreck, which had no name and origin, as the Clarke’s wreck. The name has stuck and local divers now use it to refer to this delightful wreck.

In the warm seas of Sri Lanka, a country where he found his true home, this wreck now serves as a fitting memorial to Clarke, a visionary who undoubtedly inspired a legion of new explorers to set their sights on oceans and stars.