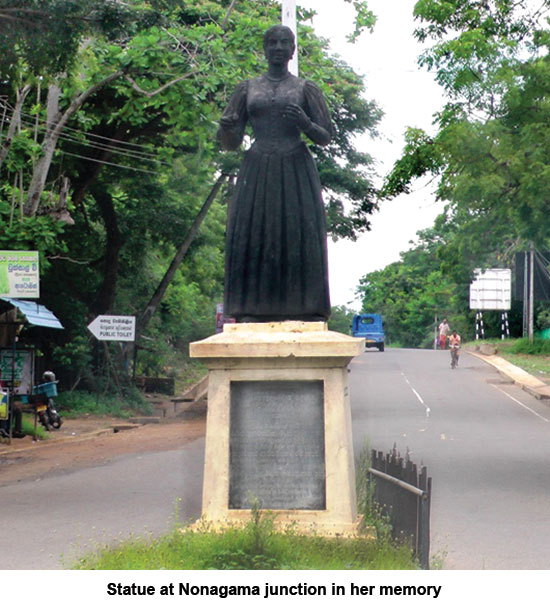 Travellers along the Colombo-Hambantota Road pass through Nonagama which is named in the memory of a very special lady. She is Dona Isabella Cornelia Perumal better known as Gajaman Nona, the poetess of wit and repute hailing from Ruhuna.

The Dutch thombu have records of her birth as well as of her family. She was born on October 30, 1758 at Kollupitiya. Her father was Wiertamulle Gamage Don Francisco Senaratne Kumarperumal alias Gajaman Arachchi while her mother was Francina Grero alias Baba Hamine. Her father was appointed supervisor of the elephant kraals and hence was better known as Gajaman Arachchi as Gajaman refers to elephants. She was baptized at the Milagiriya Church, Kollupitiya when she was a few months old. When Gajaman Nona was around 14 years, the family moved to Weheragamtota area in the Hambantota District. She received part of her education at the feet of scholar monk, Venerable Karatota Dhammapada Thera at the Weheragamtota Viharaya and grew into a very versatile poetess.

But her life was hard. Her father was killed in an attack by a wild elephant on a pilgrimage to Kataragama. Gajaman Nona was greatly attached to her father. She expressed her great anguish in verse.

“The fierce elephant ended the life of my beloved father;

The cruel beast tore us apart

I do spend sleepless nights, sorrowfully thinking of you.”

She married at the age of 22 but her husband died two years later leaving her with an infant son.

She married once more but was widowed a second time and left with three children to fend for and had to face many hardships to bring them up on her own. But she did not let her sorrow pull her down but instead strengthened her resolve and made a name for herself as a poetess.

Gajaman Nona’s best work is titled Denipitiye Nuga Ruka in which she decribes the wonders of this majestic tree, how its spreading braches shelter the weary travelers, and is a home to birds. Her poems detail in verse the day to day happenings in life.

“The lady’s face carries the brightness of both and sun and the moon,

Her budding breasts resemble a pair of blue sapphires,

Oh Nona! Why do you continue to sleep alone?

This was her reply:

“Since the death of my wedded lord

I am used to the lone bed

I have forgotten what sensual pleasurers are

What rights have you to question me thus?”

Many men tried to take advantage of her position as a young widow and Gajaman Nona used her poetic skills to either dissuade them or give them a subtle hint to continue their pursuits.

Once a young man infatuated with her wrote:

“Do the people of your village not engage themselves in meritorious deed?

Do they not occasionally open the door of your house with consent?

Do not frogs frolic in ponds containing manel flowers?

Will you not be sad if I die of unrequited love?”

In reply she wrote:-

“Is there a limit to the number of people who use this road?

Do people who take a drink of water make a river muddy?

If a person is shrewd enough. Will he not be able to open the door however hard it is?”

Gajaman Nona’s communication in verse with the British resident in the Matara District at the time- John Doyle is also well known.  At one time when she was in pecuniary difficulties, she addressed a petition in verse to Doyle. He was impressed with her  and is said to have gifted her  land  off which she could live and fend for her children.  The extent of her poverty can be gauged from the following verse:

“My children who were once well fed,

Do not have even a little rice to alleviate their hunger,

With upraised arms I do implore,

Your honorable John Doyle for some relief.”

She died on 15th December 1814 at the age of 56. But the memory of the woman who made a mark in a male dominated world and a woman well ahead of her time lingers on ….