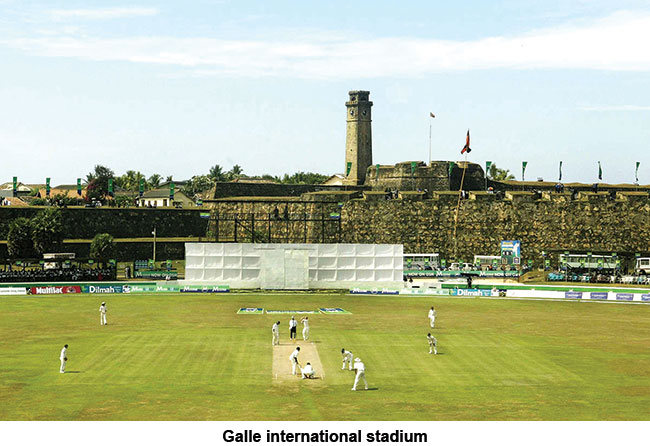 The Galle International Cricket Stadium with its stunning setting of the 17th century Dutch fort as the backdrop has been the bastion of the country’s cricket team since the first Test match was played there in 1997.

Why we say that is because it is at this venue that the Sri Lanka team has been formidable against all touring sides winning 18 of the 32 Test matches played there so far and lost only 8 with 6 drawn.

It has become the norm that a Test series commences at Galle before moving onto the other venues and Sri Lanka has made it a habit of winning the first match of a series quite often as the strong winds that blow from across the sea helps dry out the pitch and offer help to their wily spinners. However it has not always worked out in favour of Sri Lanka although they enjoy an excellent record at this venue. In November, they lost the first Test to England played here – a rare defeat against a non-subcontinent side.

This Test was played against the milieu of it becoming the last to be played at this picturesque venue as certain unauthorised buildings that have come up inside the stadium have violated heritage laws protecting the Dutch fort, according to the government which wants the stadium to be moved to another location or have the buildings demolished.

The building in question is the 500-seat VIP box named after the former President Mahinda Rajapaksa that obstructs the view of the historic Dutch fort. The fort risks losing UNESCO World Heritage status because of this unauthorised construction.

The fate of the Galle Stadium hangs in the balance and at the mercy of the government in power.

Sri Lanka’s Sports Minister Faiszer Musthapha said that there will be no immediate demolition and added: “We want to maintain the World Heritage status for the fort. We will work out an alternative for the cricket stadium.”

The Galle stadium which is located in the south is hallowed among cricket fans the world over because of its stunning setting.

Although officially declared as a cricket stadium in 1927, the ground belonged to the Galle Municipal Council and was used to stage other sports events as well as musical shows and political rallies. Sri Lanka Cricket found this to be unsuitable if international cricket was to be played here and in the nineties they signed an agreement with the Galle MC to have it leased to them on long term.

Subsequently, the ground which was then referred to as ‘the Galle esplanade’ was upgraded to international cricket standards, and became the seventh international cricket stadium in Sri Lanka which is able to host Test matches. The first Test match was played on 3 June 1998 when Sri Lanka hosted New Zealand and beat them rather comprehensively by an innings and 16 runs. The first One-Day International match was also played on June 25th 1998 between Sri Lanka and India, but overtime with its limited spectator capacity the stadium became famous for hosting Test matches.

It is at this venue that many cricketing achievements have taken place involving the world’s greatest cricket stars.

Australian Shane Warne the greatest leg-spinner the game has produced, took his 500th Test wicket at Galle in March 2004 and when the ground was devastated by the tsunami nine months later in December, he led the campaign to raise US$1 million to rebuild the stadium. 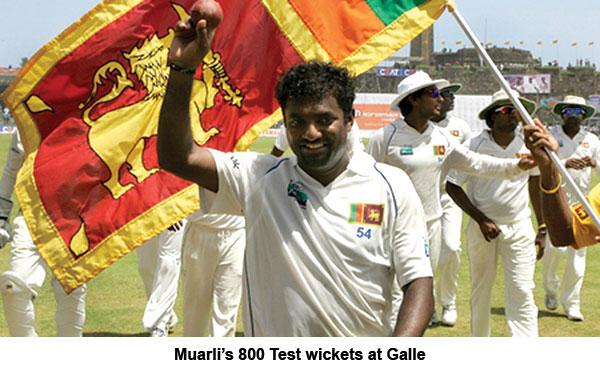 Most of the buildings in the stadium were damaged, and the ground was ravaged substantially. In the weeks that followed, the stadium became a temporary shelter for hundreds of people displaced from the tsunami.

Warne was later joined by Sri Lankan spinner Muthiah Muralitharan and former England all-rounder Sir Ian Botham who lent their support to bring life back to normalcy in the affected areas.

Renovation of the Galle International Stadium began in May 2006 and it included several new buildings including a new pavilion (which is now the centre of controversy) and a media centre. The re-constructed stadium was declared opened by the former President Mahinda Rajapaksa on December 17th, 2007 after which the first Test match was played between Sri Lanka and England on the same day.

Three years later in 2010 Galle became the venue for the world’s highest wicket-taker in Test history- Muralitharan’s swan song. Playing his final Test against India, Muralitharan required eight wickets to reach the landmark of 800 Test wickets. It was a challenge which he revelled and after taking five wickets in the first innings he picked up a further two in the second, but had to pull out all the tricks out of his bowling armoury to finally capture the prized 800th wicket when he had Pragyan Ojha caught at slip by Mahela Jayawardene. The celebrations that followed were unbelievable to say the least.

Left-arm spinner Rangana Herath who had lived in the shadows of the great Muralitharan for almost a decade stepped into the scene in 2009 to take over the mantle as Sri Lanka’s primary spinner and in March 2017, the Galle stadium witnessed another milestone when Herath became the most successful left-arm spinner in Test history when he surpassed New Zealander Daniel Vettori’s record of 362 wickets when he dismissed Bangladesh’s Litton Das. Herath also made Galle his swansong when he signed off his international career at the end of the first Test against England in November 2018 picking up his 100th Test wicket at this venue, a feat only achieved by Muralitharan.

Galle has not always been a paradise for spinners but there have been occasions where batsmen too have had the chance to showcase their talent like in November 2010 when West Indies master blaster Chris Gayle thumped the Lankan bowlers all over the stadium to make the highest individual score on this ground with 333, and in 2017 Indian opener Shikhar Dhawan smashed 126 in the second session of the first day of a Test match against Sri Lanka.

While the next Test match in Sri Lanka not scheduled till June 2019 a cloud hangs over the future of this hallowed venue as it faces an uncertain future.