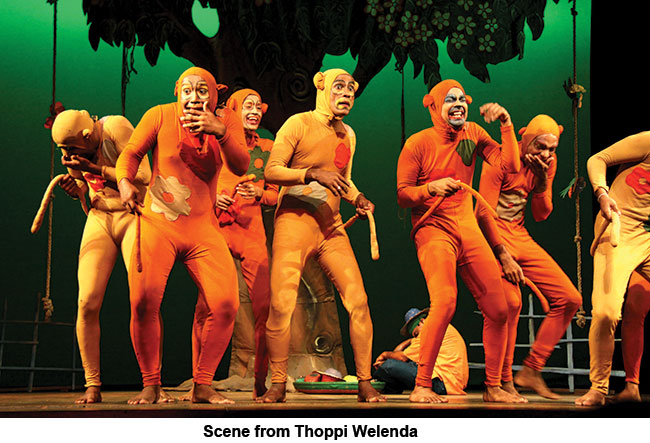 My mother was a multi tasker. She was a mother, wife, a teacher of economics in a government school, actress, theater director and an educationist.  Her desire to impart knowledge came from her parents who were teachers. They generously educated their whole village. Their house in the village was full of young people thirsty for knowledge. A huge pot with boiling jak fruit for lunch was a regular sight.

My mother hardly went to the temple as she didn’t trust the clergy but she had immense faith in the Buddhist philosophy. All her theatre productions were aligned with this philosophy. In Snow-White, the main character unites the stepmother and her father.  The hat seller gives back the hats to the monkeys. The Wolf in Red Riding Hood is forgiven. She believed that if children are not taught to be generous, kind and forgiving in their childhood, they would grow up to be quite aggressive and rough resulting from the complications in the system. Arts in this background were believed by her to be a powerful instrument that can be used to instill these qualities in young children.

She believed in being a mother not only to her own two children but to thousands of other children in the country. She had the mental capacity to do this. She was born in a village and was brought up amidst a large village community of close-knit people. Even after she moved to Colombo later in life, she never shed the qualities and the perspective that had been instilled in her by the village life. She believed that common men and women in villages who worked hard to make a living out of something that they were capable of, had the deepest understanding of  life and the circle of this nature. She always used witty, wise, principled, philosophical ‘village characters’ in her productions.

My mother never expected privacy in her home, which she considered to be a capitalist idea. May be this was because she was used to living in a place where people always visited without any notice. Her parents’ house was always open to visitors and those who came asking for help. Hence her own house in Colombo was always filled with her students and colleagues. 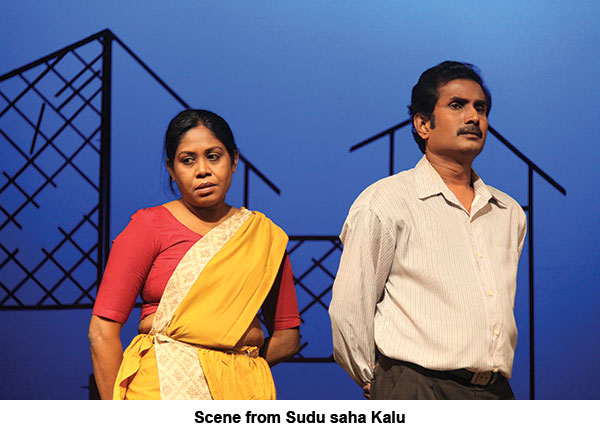 She was never a person who pursued lavish things. She led a very simple life and this reflected in her simple attire, her humble home and her simple food. Nevertheless, she had quite a different life with her husband who was the ambassador to three countries, Malaysia, the Netherlands and France. But she never enjoyed the dinners, cocktails and high society life. She tried to raise her two children, my sister and I according to her philosophy in her life. She wanted us to attend government schools, associate and have a well-grounded upbringing. This helped both of us to face this consumeristic society, this rat race, this struggle with balance.

My mother was a student of Professor Ediriweera Saraschandra at Peradeniya University. And she was the first actress who acted in a play performed at the University’s wala amphitheater. She appeared in Saraschandra’s experimental dramas that were produced along his journey of exploring a unique Sri Lankan theatre tradition. At a time women were not very liberated, she took the risk of appearing in controversial plays like Gunasena Galappathi’s Moodupuththu, an adaptation of Garcia Lorca’s Yerma. She was quite progressive in her vision and stood decades ahead of others in her generation. She was fortunate enough to be married to a person who had the same line of thinking and perspective towards life.

She did not stop at being just an actress. She became a playwright, theatre director and an educationist. She was one of the pioneers and the only person who seriously continued to engage in children’s theatre in Sri Lanka. She even gained foreign training and education in the subject.

In 1981 she established her own theatre school for children and young people and, for over three decades, carried on training actors and producing theatre for children and youth. Somalatha Subasinghe Play House has produced many young artistes who have made significant contribution to Sri Lankan art field. She devoted the space of her own house and resources for the benefit of young aspiring artists in Sri Lanka.

Somalatha Subasinghe was completely against consumerism and extreme individualism and she led by example. She held independent political opinions and was never hesitant to express them in public.  She never compromised her principles as an artiste. She was an artiste who wanted her conscience to be crystal clear. She kept up to it until the end of her journey.

Her memory will always be a blessing to our future generations.

Writer is a versatile artiste who has explored both the stage and the silver screen. Kaushalya keeps her illustrious mother’s legacy alive by steering ‘Play House Kotte’, bringing rural artistic talent to the limelight.