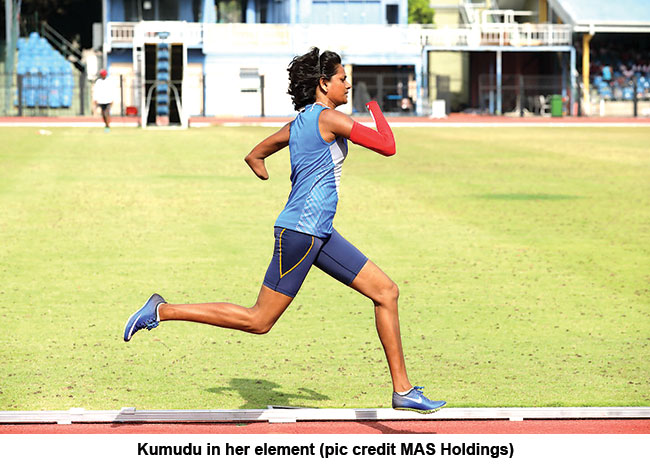 National para athlete, Kumudu Priyanka believes that it is the sheer will power which wins the day more than the limbs…

An unusual metal object lying in Kumudu Priyanka’s home compound in Horabokka, Moneragala drew the attention of the young girl and her mother. Intrigued by it, the 16-year-old fiddled with the object knowing little that it was a hand grenade carelessly disposed in her garden by some unknown party. The hand grenade which blasted in her hands, robbed her of both her hands and vision in one eye. Her mother, R.M. Nandawathi too sustained severe injuries, though fate was more kind to her.

Once a ‘complete’ young girl with a knack for outdoor life in the prime of her youth, Kumudu was pulled into an abyss of darkness with no purpose in life any more on that fateful day on 25th May in 2005. Kumudu who was rushed to the Buttala Hospital by the villagers, was later transferred to the Badulla Hospital where she received treatment for nearly two months. “I thought my world had come to an end,” recollects Kumudu a star national-level athlete today. With a wealth of international exposure at para-athletic meets including Asian Games and Asia Pacific Games, Kumudu’s list of medals runs long. Making her employers at MAS Holdings and her country proud, Kumudu’s zest for life is astounding. “After my accident, I realized that what matters is not a person’s limbs but the mental courage to face life,” reflects Kumudu who navigates day-to-day chores with dexterity despite the loss of fingers. “What people like us need is not sympathy but empathy,” adds the sprint queen who applauds her organization and her mentors for being living embodiments of this.

Having lost her father at the age of three and the step- father later deserting her mother and her three siblings, Kumudu’s young life was full of trials and tribulations. The single parent her mother was, had to fend for her young family working on sugar cane plantations in the area. Today at 30, Kumudu is proud that she could finally look after her mother and her youngest sister, still schooling. “When I lost my hands, I was feeling guilty as a dependent. My mother’s life was already a hard one and I felt wretched to be an added burden.” Applauding her mother for being a ‘liberal woman’ in a social setting where children with disabilities are often hidden from the public eye, Kumudu credits her for opening up avenues for her to return to the mainstream. She is equally thankful to her fellow villagers and the Chief Prelate of her village temple who stood by her during her darkest hour.

Coming under the wings of the late Premadasa Dissanayake who steered Rehab Lanka was a turning point in Kumudu’s life. Having been introduced to the visionary leader, a wheel-chair user himself through the AG Office in Moneragala, Kumudu never looked back. “I’m what I am today because of the guidance I received from my mentor whose is no more,” says emotionally-charged Kumudu. The association with her peers at Rehab Lanka with diverse disabilities empowered Kumudu to ‘find herself’ once more and become independent. Today she handles her phone, cutlery and the computer like any other counterpart with no disability. She catches a bus home to Moneragala once a month. The perceptions of society towards people with disabilities have largely progressed here at home, says Kumudu, adding that still there is so much space to improve. She is quick to add with a smile, “although there are still those who keep on staring at me in disbelief at public places, on the bus etc, more people have been kind to me and supportive.”

The athlete in Kumudu lying dormant all these years was ignited when she participated in Para National Athletic Meet in 2006. Clinching gold medals in 100m and 200m running and long jump, Kumudu went on to hone her faculties under several inspiring coaches. Today she aspires to represent the country once again at 2020 Para Olympics. Having acquired computer skills a few years after her accident, Kumudu is productively employed at MAS Intimates Unichela Panadura today as a data entry operator. Shakthi Ranatunga, Group Director Human Resource at MAS states, “sport is a creator of opportunities for talented associates at MAS. It also opens up mediums of excellence for our 400 colleagues with disabilities. We strive to create a workplace where they are recognized for their abilities and not disabilities. It is not only about offering a job, but creating the right conditions – internal and external built environment, physical and emotional support mechanism, where dignity is paramount and they get opportunities to pursue their lives’ passion. In our organisation, everyone gets an opportunity to become a hero.”

Grateful to all the support she receives from her organization, Kumudu urges more corporates to take a cue from it. “I have never been discriminated in my working environment. On the contrary, I receive the fullest support not only in my work but also in my athletic pursuits,” says Kumudu who represents the MAS athletic team as well.

With her cheerful countenance, Kumudu surmises: “I was born a complete human being and I never thought I’d lose a part of me. Life is unpredictable but whatever befalls, we need to brave it just as I have.”