THE UNMISTAKABLE TASTE OF HOME

THE UNMISTAKABLE TASTE OF HOME 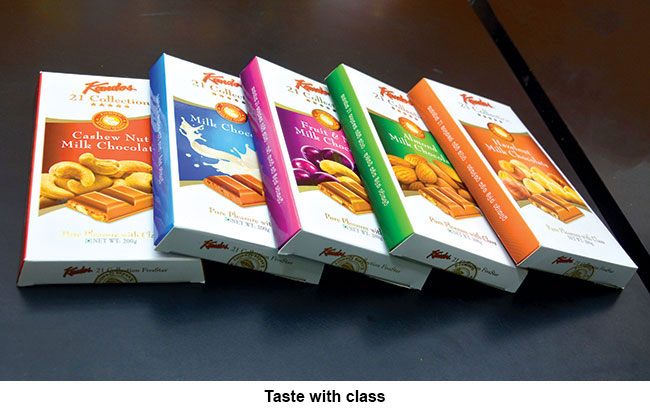 Be it Cashewnut, Cracker Jack, Dark Chocolates, hand-made chocolates Bunnies or Kangaroos, it is not just the concoction of home-grown cocoa and milk that arouses the taste buds but a legacy that comes sealed with every bite… Kandos – a name and a taste every Sri Lankan child has grown up with, for nearly 60 years, continues to linger in the hearts of Sri Lankans. It is no secret that a slab of Kandos is often tucked into the bags of many Lankans going in search of greener pastures for that unmistakable taste of home…. We unravel the ‘Sweet Story’ behind this much loved chocolate brand.

In 1970 Ceylon Chocolates Ltd passed its hands to Sri Lanka’s most colourful business magnate todate- Philip Upali Wijewardene. Cambridge educated Wijewardene, an illustrious Royal College product, who returned home at 21’, was recruited by Lever Brothers as a Management Trainee. The corporate rigours left the young recruit drained in two years. The Asian business tycoon to be, did not fall back on his family wealth but sought his own fortune first with a friend’s ailing Candy Confectionery plant which he re-baptized as Delta and a few years later with Kandos, the brand promoted by Ceylon Chocolates Ltd.

With the Senator Sarath Wijesinghe at its helm, he was joined in by Dodwill Berenger, Eardley Perera (Snr) and Ashley De Silva to set up Ceylon Chocolates Ltd in May, 1962. The cool climatic conditions conducive to Chocolate manufacturing and access to the staple raw material- Cocoa, drove the board to select a land from Padiwatte in Kundasale. M/s Walker & Greig Ltd were the builders of the factory. German Chocolate Connoisseur Heinz Schaller was hired by the Company to set the stage for production. Machinery was installed by locally hired workmen under the guidance of Schaller.

When Chocolate production began in 1965 the Management solicited a suitable brand name for the product from the public through newspaper advertisements. However no name was acceptable to the Board. Thus it was decided to form the brand name by coining the first letters of the first names of the Board members! ‘Kan’ was derived from Kandy where the product was born, ‘Do’ from the first name of the Managing Director Dodwill Berenger, and ‘S’ from the first letter of the Chairman’s name, Sarath Wijesinghe. The Chocolate brand which was to tantalize an entire continent and beyond, was thus born. 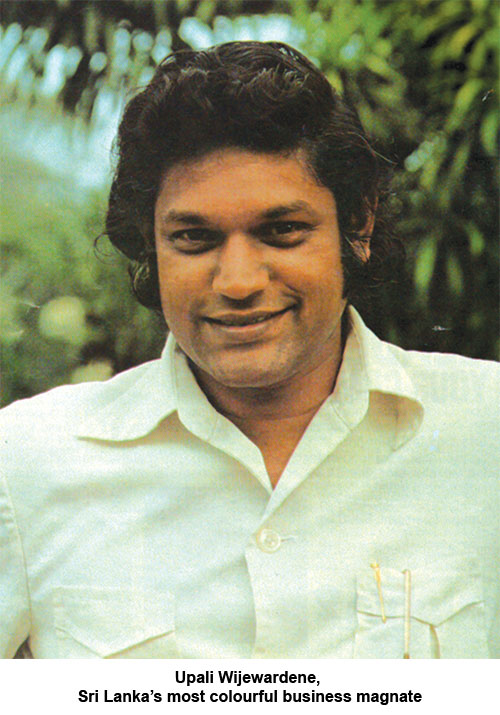 In 1970 with the demise of its Chairman, Sarath Wijesinghe, his nephew, Upali Wijewardene who was expanding his business empire took over the reins of Ceylon Chocolates Ltd. As Dhammika Attygalle, Group Director, Upali Group of Companies and nephew of the late Upali Wijewardene and the grand nephew of the Founder Chairman explains, with the acquisition of Ceylon Chocolates Ltd by his uncle, the production of Delta which was a well-known candy brand in the country by then, was transferred to the Company. “Delta was being manufactured by Ceylon Sugar Company, formerly Rajaram Confectionery Company Ltd and when this was acquired by my uncle and he absorbed it into Ceylon Chocolates Ltd which to date produces the entire range of confectionery products marketed and distributed island wide by Upali Food & Beverages Company Ltd.

Cocoa always had special significance to the ‘quintessential entrepreneur of Asia’ as Upali Wijewardene was dubbed. The singular cocoa tree which still adorns the Upali Group’s head office at Bloemendhal Rd, Colombo 13 and the tall mature cocoa tree which once stood at the doorway to the business magnate’s luxurious residence in Panthaihill Kuala Lampur in Malaysia which he aptly named ‘Cocoa Hill’ hold testimony to the fact. The expanding fully-fledged cocoa processing plants and factories in Malaysia, Singapore and Thailand which enabled Kandos to be internationally present and rub shoulders with Nabisco, Mars, Cadbury and Hershey’s was a personification of Wijewardene’s philosophy: ‘plunge in and get on with it.’ Interestingly, Wijewardene, an ardent horse lover named one of his thoroughbreds Kandos-Man! 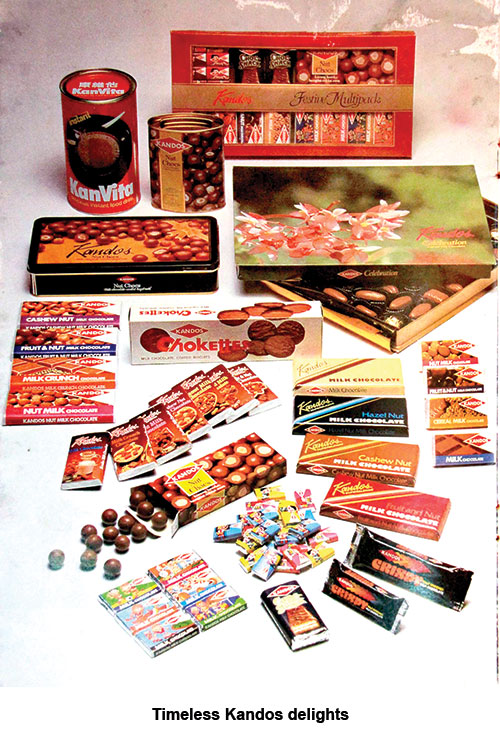 Consistency and quality, remain the cornerstones of Kandos’

success, observes Attygalle. “The brand had always benchmarked itself with the best. When the chocolate drink Kanvita was introduced, I’m told my uncle bench marked it with Bon Vita for instance. Moreover, Kandos prides in being an authentic Sri Lankan brand, with its staple Sri Lankan Cocoa lending it its rich flavour and the Sri Lankan skill harnessed in the craft of chocolate-making. The local cocoa which goes into making Kandos, is the variety known as Creollo Cocoa introduced by the Mayans to the world more than 5000 years ago as Kandos proudly proclaims. The local cocoa sourced from plantations in Matale, Kandy and Uva Provinces is more expensive than the cocoa in the international market, explains Attygalle who adds that the Company encourages local cocoa farmers for a constant supply of the raw material. A Gold Medal is awarded annually to the Best Student of the Agriculture Faculty of the Ruhunu University by the Upali Group in memory of the late Upali Wijewardene.

Apart from the most sought after Kandos Cashewnut and Kandos Milk Chocolates, the Kandos Cooking Chocolate and Cocoa Powder are products that are used by many bakeries, pastry chefs, cookery instructors and other baking lovers to add taste to their chocolate cakes, puddings, éclairs, muffins, doughnuts, cookies etc. These products as Attygalle points out, remain market leaders and popular choices among confectioners. 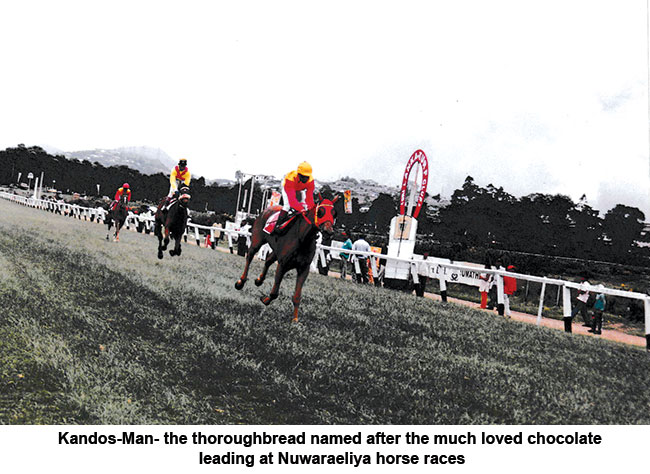 The array of hand-made chocolates and seasonal specialties such as Easter Bunnies, Valentine Marzipan Hearts, Mint Centers, Dark Chocolates, Coated Biscuits, Wafers and the Gift Collection available at Kandos Shops on Upali Group’s properties at Thurstan Road, Bloemendhal Road and Galavilawatta Homagama are a delectable treat at any time. Not to mention the ever popular Kanvita chocolate drink! The Kandos Chocolate Éclair and the range of puddings add to this delicious list.

The presence of international brands and other competitors are perceived by Attygalle to be conducive to competitive business in the industry. “Competition always enables a product to better itself, to push its limits,” says the senior professional who cites the wisdom of the Upali Group’s Founder to promote home-grown brands on par with international standards.

The Managing Director, Upali Group of Companies, Nimal Welgama notes that the product constantly strives to keep abreast with advancing best food manufacturing practices to assure the quality inherent to it while expanding its product portfolio. “There is an inherent quality and a signature taste unique to Kandos in which the product always prides in. We are confident that as the iconic chocolate brand in the country, Kandos will continue to tantalize the taste buds of several more generations to come.”