With humps and fins they take the plunge

With humps and fins they take the plunge 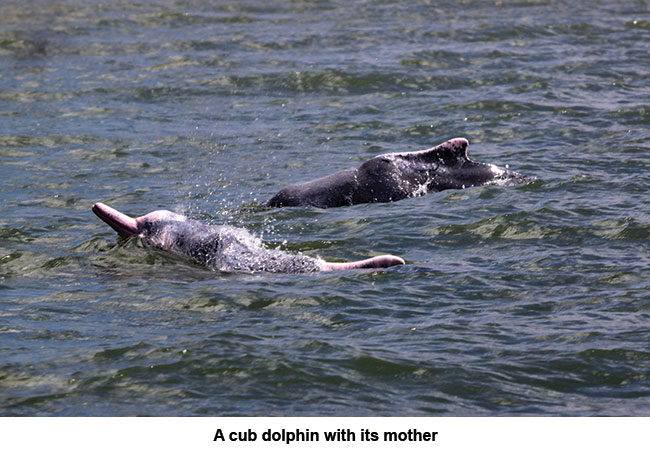 The iconic Humpback or Pink Dolphins of Puttalam Lagoon are on the path to extinction unless urgent measures are taken to conserve these rare sea mammals.

Humpback Dolphins are also known as Pink Dolphins, because they are mottled with pink, like domestic pigs. Although locally known as ‘Pink Dolphins’they are different to the Pink Dolphins found in the rivers of Amazon.

According to historical records, ten years ago, Dutch Bay of the Puttalam Lagoon had been home to about 150 Pink Dolphins.Sadly, only six of them are found today in the entire lagoon. Puttalam Lagoon is the largest lagoon in the country with an extent of 126 sq miles.

Recent observations, however, indicate the presence of new born cubs in the lagoon. This is great news to the wildlife enthusiasts here.

Pink Dolphins are characterized by the conspicuous humps and elongated dorsal fins found on the backs of adult dolphins. Their main diet consists of mullet and other schooling fish. However their feeding habits are widely unknown, as this animal itself is not widely known. Their small group size and erratic behaviour makes them difficult to locate. They often patrol slowly and their behaviour is influenced by the tides and pods which move inshore.With the rising tide, these dolphins come to feed in mangrove channels and estuaries, returning to the sea with the ebb tide. 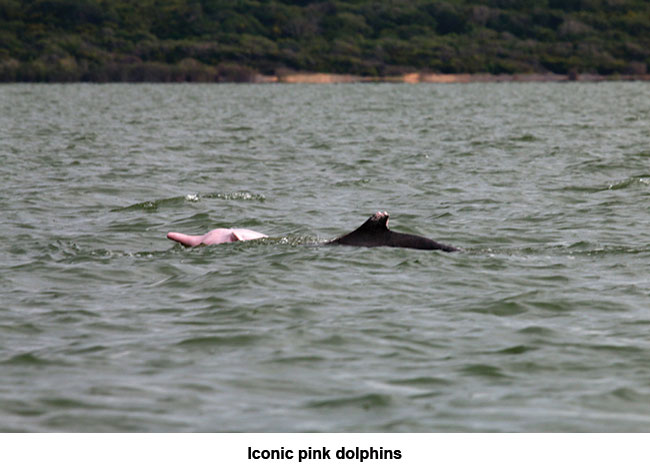 Unlike Spinner Dolphins, these dolphins never bow-ride. Instead, they swim slowly and surface steeply after a dive, exposing the entire head above the water. The dorsal fin is accentuated when it is humped above the surface of the water. At the beginning of a dive, this humped dorsal fin is soon followed by the flukes, which are also lifted out of the water at the onset of a dive.Some of the Pink dolphins in the Puttalam Lagoon have also been seen spy-hopping, waving their flippers above the water and occasionally leaping in to the air which make them interesting to watch and be photographed.

The Puttalam Lagoon is fed by two rivers, namely the Kala Oya and MiOya. It is linked to Mundal Lagoon, to the South by a channel. The lagoon’s water is brackish and at times saline. The lagoon is surrounded by a fertile region of coconuts, open forests, grasslands and shrub lands. The land is used for prawn fishing, salt production and rice cultivation. The lagoon is also nourished by nine species of mangroves, sea grasses and some salt marshes, attracting a wide variety of biodiversity including the Dugongs (a sea mammal locally known as muhudu ura).As some of the local communities believe that the flesh of these animals has aphrodisiac properties and sometime misjudge to be Dugongs,they get killed in vain.

Human activity such as killing, illegal fishing, use of illegal netting and habitat destruction are the main threats to this rare species. Pink Dolphins can be saved with education and community awareness among the local fishing community and school children about their value as partners contributing to biodiversity. Needless to say that nabbing of illegal fishing activities call for more teeth. The Department of Wild Life Conservation, the watchdogs of fauna in the country, is tragically not paying attention to conserve this valuable species.

Conservation of this rare species of a sea mammal becomes imperative from the tourism industry’s perspective as well. The Puttalam-Kalpitiya area is increasingly becoming a hot spot for tourists with its close proximity to the Katunayaka International Airport and ancient cities such as Anuradhapura and Sigiriya. Hence, conserving this iconic creature can garner the country, significant revenue.

The writer is a naturalist, researcher and a wildlife enthusiast.