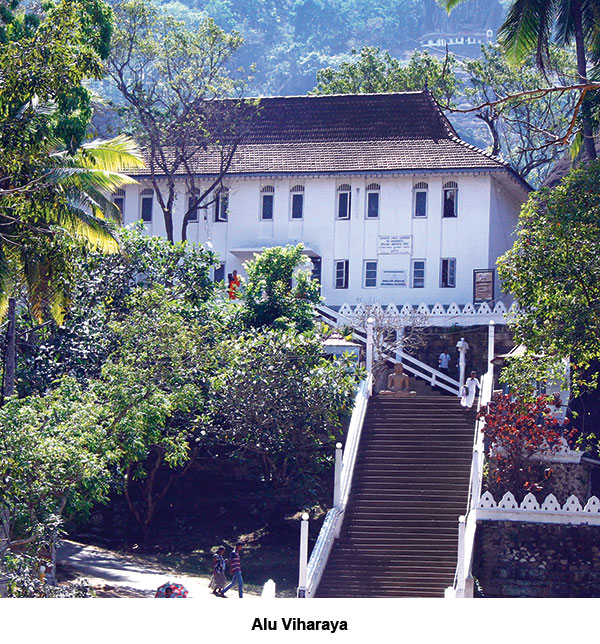 The Alu Viharaya in Matale became the focus of a great national event when the ceremony to mark the declaration of the Tripitaka as a National Heritage was held there recently. Chandani Kirinde visited the ancient rock temple to learn more

The rock temple at Alu Viharaya in Matale is of great significance in the history of the Buddhism in Sri Lanka. It was within the secluded rock temple, during the reign of King Vattagamini Abhaya who came to the throne around the first century B.C, that the Buddhist scriptures known as the Tripitaka were committed to writing for the first time.

Earlier this year, President Maithripala Sirisena declared the Tripitaka Pali Canon as a National Heritage and chose the Alu Viharaya or Alulen Viharaya as it is also known as the venue for the ceremony for the formal declaration thus drawing renewed interest in the rock temple which has for centuries been the repository of ola leaf inscriptions.

In making the Tripitaka a National Heritage, the vital position that the Alu Viahayara holds was emphasized by the President. The declaration noted that whereas the linage of Sri Lanka’s Buddhist monks has uninterruptedly and continuously preserved and protected the Buddha’s teachings learning them by their hearts, the teachings were later chronicled on Ola Leaves in Pali, the language by which The Buddha preached his teaching, at Alulen Vihara of Matale during the reign of King Vattagamini Abhaya popularly known as King Valagamba.

According to the Great Chronicles, Dipavamsa and Mahavamsa, King Valagamba first came to the throne of island nation around 103 BC but had to flee in the face of a rebellion forcing him to live as a fugitive for 14 years before reclaiming the throne in 88 B.C. It was during his years in exile from Anuradhapura that he took refuge in the rock caves in the central hills and sighted the caves at Alu Viharaya. It is believed he may have earmarked it as a probable site for preserving the Tripiţaka at a later date.

A visitor to Alu Viharaya even today can easily understand why King Valgamba may have chosen the place when the need to write down the teaching of the Buddha for posterity became imperative. Situated in the foothills of a mountain range, the temple is built into the massive rocks that have molded themselves over thousands of years to provide the perfect place for such an exercise. Another reason maybe has been the fact it is located a safe distance away from the then strife-torn Capital of Anuradhapura. 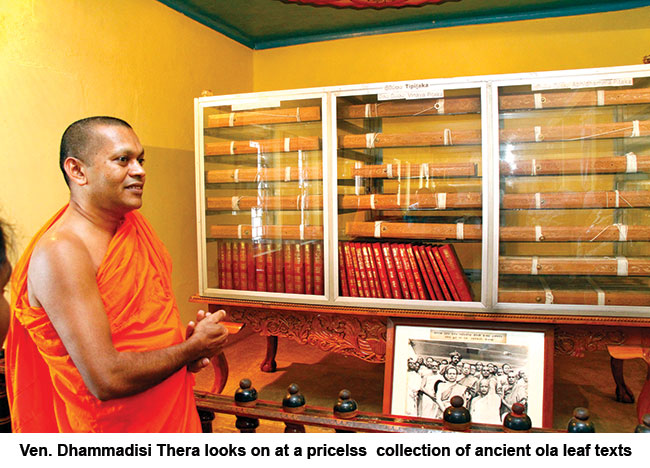 Before Lord Buddha’s teachings were committed to writing at Alu Viharaya, his teachings were recited orally and passed down by word of mouth since parinibbana (demise) but with the country being ravaged by famines, foreign invasions and internal dissensions which widely disturbed the religious and social institutions in the island, it was decided that the continuance of the teaching through the form of recitals was no longer safe.

“The sangha, the monastic order, assembled at Mahā Vihāra, the first monastery in Sri Lanka at Anurādhapura and took council together and with the assistance of the king, held a convocation. The teaching was recited, and arrangements were made to engage scribes to commit the Dhamma to writing. A selected number of Arahants among who were scribes and reciters convened at Aluvihāra where they completed the work,” according to the book containing the history of the Temple compiled for the ceremony where the Tripitaka was declared a national heritage.

It has been recorded that the event was celebrated with a great festival under the patronage of King Valagamba and that it went on for three years, three months and three weeks. According to both the Mahawamsa and the Deepawamsa, the two Tripitaka texts were written in gold leaves and one was enshrined at the Abahayagiri Chaitya in Anuradhapura and the other in Alu Viharaya.

The Alu Viharaya till today attracts hundreds of visitors to its precincts. While Buddhists can engage in religious activities, a visit to the Rock temple is also a learning experience with a museum dedicated to the art of writing on ola leaf.

On display are the dried and pressed leaves of the talipot palm tree (tala) which are used for writing, an art that continues to be practiced by a select group of Buddhist monks. Among them is Venerable P. Dhammadissi Thera, the Chief Incumbent of the Pradeeparamaya, Kande Viharaya at Palapathwela which is located in close proximity to Alu Viharaya. The thera who guided us through the process said that the methods used today are the same as those used more than 2000 years ago when the Tripitaka was committed to writing.

“The leaf of the talipot palm when dried and pressed to consistency can last for hundreds of years with no damage or discoloration. This is what makes it such a unique material,” he said.

The thera is engaged in teaching others the process of how to prepare the ola leaf and write on it so that the practice remains in use for years to come.