Along with the kiribath, kevum and kokis that adorn the typical New Year table in April, another quintessential and must-have item is banana. The delicious banana is the most cultivated and consumed fruit in Sri Lanka replete with nutritional properties

The banana plant has a close relationship with the Sri Lankan culture and the plant is utilized in cultural and traditional activities by people of all communities. It is a common sight at religious and cultural festivals as a food item, as an offering as well as an ornamental and decoration item. It is also consumed in many ways, be it as a dessert, a curry, a snack or even as medicine. Banana is often the first solid food introduced to infants because its easily digestible, soft and delicious. It is also a favourite gift item among Sri Lankans when visiting loved ones as well as those recovering from illnesses. There is no other fruit that is as closely linked to the lives of Sri Lankans like banana. The banana plant has many uses- be it the leaves, flower bud, pseudo stem or corm.

Banana is highly nutritious and is a wholesome food item with high energy, ample amount of carbohydrates, minerals as well as vitamins such as potassium, calcium, prosperous, Vitamin B and C. Its richness in potassium helps control blood pressure, protects from strokes and muscle cramps. Banana is also a rich source of probiotics and antioxidants and is good, both for the heart and the stomach.

Banana (Musa spp.) is native to South Asia and Western Pacific Region. The wild ancestors of cultivated banana; Musa acuminata Colla (Unel) and Musa balbisiana Colla (Etikesel) are distributed in South and South East Asian countries including Sri Lanka. The earliest written reference to bananas in Sri Lankan history goes back to about 341 A.D. when in the time of King Buddhadasa who is known as a good physician, recorded in his Sarartha Sangragahaya, the medicinal values of various parts of the banana tree. There is also evidence that the prehistoric inhabitants of the island (over 12,000 years ago) had consumed wild bananas because in the stone age man’s cave sites in Ratnapura district (Balangoda Man of Batadombalena), the seed remains of ati-eta kesel had been found in carbonized state which proves the long existence of Musa in Sri Lanka.

Bananas are an attractive perennial fruit crop due to its high economic returns. Banana can be profitably grown throughout the country at very high elevations, at any time of the year and the plant yields fruit year around. This is a great advantage compared to other seasonal fruit crops such as rambutan, mango etc. Banana can be harvested in shorter period bearing fruits in about ten months and has an economical life span of about four years.

At present about 49,307 hactares of lands are under banana cultivation in Sri Lanka, that is about 54% of the total fruit cultivation extent and the annual banana production is around 750,587 tons. Until recently, banana cultivation was limited to home gardens or very small-scale cultivations, but now it has become an commercially important fruit crop grown in large scale. Statistics indicate that banana is the highest exported fruit crop in the country. While all types of banana are in demand, Kolikuttu fetches the highest farmgate prices, both in the whole sale and retail local market. 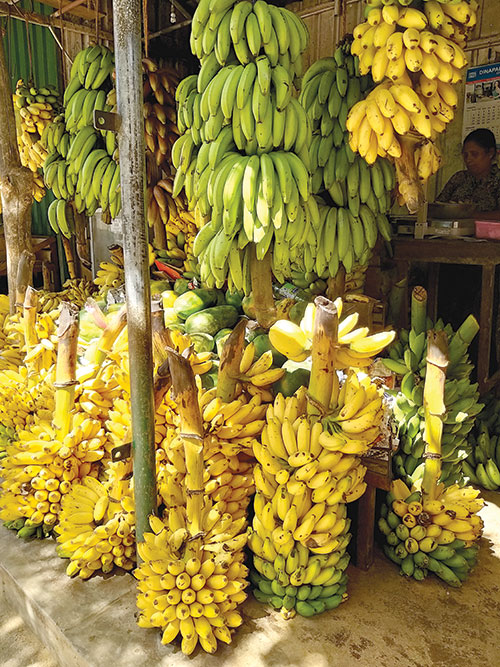 There is a huge diversity of bananas with different shapes, colours, sizes, textures, and flavours in fruits and tree morphological characters in the country. Banana is the only fruit similarly recognized as a fruit and a vegetable crop.There are two major types of edible banana cultivars in the country: banana (dessert types) and plantain (cooking types) with different morphological characters and uses. Today ornamental banana species have also taken a place in our home gardens.

The most consumed and well-known varieties of banana are Ambul, Seeni, Kolikuttu, Ambun, Anamalu, Puwalu, Rathambala/Rath kesel, Bimkesel and Cavendish which are consumed as a fruit while Alu kesel or ash plantain is the cooking variety. Another type of banana which is used as a fruit is Nethrapalam which is the most expensive but not yet cultivated on a large scale. While another sought after variety, Suwendal is also a popular and specially grown in home gardens.There are also few other types of bananas used in traditional cooking such as Kithala, Mondan, Etamuru, and Marathamana.

Ripened Ambul bananas are slightly sour and sweet in flavour with a pungent aroma. Ambul banana are known to ease food digestion and have a cooling effect. Seeni bananas are similar to Ambul in size but outer colour is pale yellow and flesh is sticky and sweet. Seeni banana is good for diabetes and possess many medicinal qualities. Kolikuttu is stout and plump in shape and the highest priced among the commonly consumed types of the fruit. Ripe Kolikuttu drop easily from their bunch, making it difficult to transport them.

The Embun of Cavendish group shows excellent fruit qualities and larger in size. Its flesh is creamy and sweet, the outer skin is light green when unripe then turns buff-yellow at full ripeness. Anamalu also belongs to the Cavendish group, a local variety. It is distinguished by its slender, long, curved shape and thick skin of lemon-yellow when ripe. It is recommended for athletes for its ability to generate a quick burst of energy. It is also good for digestive problems. 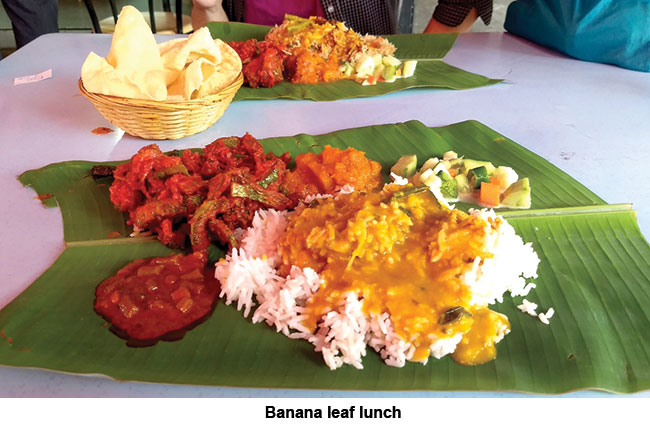 Rath kehel/Rathambala is famous and attractive for its reddish skin. It is moderately sweet with a peculiar flavour. Rath kehel is commonly cultivated in Kandy. Puwalu and Suwandel bananas are less common but are very delicious. There are two types of Puwalu; one found in the North and the other in the South. Nethrapalam is very distinct in its features. Its length is about 12 inches long, and weighs about 500 to 1000g. People believe that Nethrapalam improves eye sight and possesses aphrodisiac qualities. Bimkehel /Navkesel is also a Cavendish type known as Sri Lankan Cavendish. Bimkesel tree is of dwarf size and fruit bunch almost reaches the ground.

There are newly developed banana varieties including varieties that can be used as dessert and for cooking such as Kandula. These are recommended for the cultivation by the Department of Agriculture.

Apart from the fruits, banana leaves are traditionally used for serving food, wrapping and storing food items. In recent years, with the ban on the use of polythene sheets, banana leaves are much sought after as a food wrapper. This new trend has led to an increasing interest in the cultivation of banana plants, both for its leaves as well as its fruits. Banana is a versatile multi-purpose fruit and it should be further exploited to enhance food security and agriculture development in the country.

Dr. Kalyani Ketipearachchi is a scientist with special interest in fruit agronomy. She was the Principal Scientist (Fruit Agronomy) at the Fruit Research and Development Institute of the Department of Agriculture.