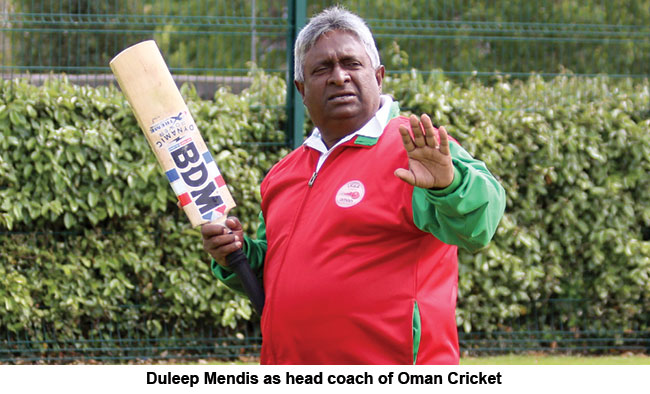 Duleep Mendis is a name synonymous with Sri Lanka cricket but currently he is making waves in Oman as their Chief Development Officer and national cricket coach.

When Mendis took charge of Oman Cricket six years ago they were getting nowhere and were not even heard of as a cricketing force amongst ICC associate members but overtime they have developed their cricket to the extent that they are currently on the verge of gaining One-Day International (ODI) status.

“We started from division 5 when I took over and we are currently in division 2. In April we have the division 2 tournament in Namibia where six countries are participating and if you reach the first four then you get ODI status. That is the pinnacle for you to get ODI status from nowhere,” Mendis said explaining the rise from total obscurity.

“What we are aiming is to get that ODI status then we will have to improve our infrastructure and we will have to play at least 225 out of 365 days of cricket a year. Whether the companies will allow the boys to come and play and give leave that’s where Oman Cricket has to play a role and get them under some of contract.

“Things will have to change from then onwards because in Asian Cricket Council (ACC) countries Indians and Pakistanis, Sri Lankans and Bangladesh is they are basically there for work and very few boys are being taken only for cricket. Now things are changing because the team is doing well and more and more companies are taking boys with cricket which is a good sign for Oman because even in our team the majority are Pakistanis and balance Indians with one or two Omanis. When it comes to cricket no one is talking about Oman and now various people are talking because we have beaten the USA in the last tournament,” he said.

Assisting Mendis with the Oman national team is former Sri Lanka off-spinner RuwanKalpage who is the fielding and spin bowling coach. They also have a trainer from South Africa, a physio and a doctor. Until of late former Sri Lanka fast bowler Rumesh Ratnayake was also part of the support staff before he was ‘hijacked’ by Sri Lanka Cricket.

It was not all rosy for Mendis when he first arrived in Oman to undertake their cricket. 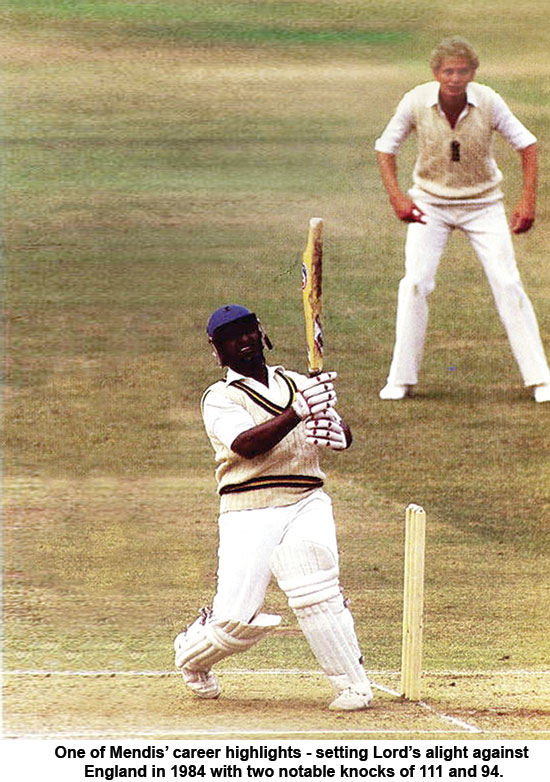 “These boys at the start found it difficult to get leave but gradually when the team stated doing well the companies have started supporting. Now I have no issues because we have training in the morning at 5.30 and practices in the afternoon from 2.30 pm. The boys get leave and things like that,” said Mendis.

“We do quite a lot to encourage the local to participate so that they take to the game. The culture in all these ACC countries is football now we are introducing cricket into government schools and doing a lot of campaigning at a ground in Amarat for local boys from different age groups. They like to play cricket so we have introduced softball cricket to encourage them.”

Speaking further Mendis said, “we have put out a team called national youth development team it is fully sponsored by Oman Cricket and has about 97 percent Omani boys. Their clothing, transport, food and a small contract has been given to them to encourage the locals. Altogether we have about 95 teams with a lot of expats playing at different levels. These are not clubs but teams very similar to our Mercantile sector – all companies. In the league we have seven full Omani teams playing that alone is about 120 Omani boys who are playing at different levels. Under 19 cricket is played by the expat schools and we keep encouraging the locals.”

Mendis is extremely happy that Oman Cricket is very supportive of the game and are going all out to make them a strong cricketing force in the years to come. He was full of praise for Oman Cricket Director PankajKhimji and secretary Madhu (Bhai) Jesrani- the two live wires of Oman Cricket.

“The most encouraging part is that 100 percent they are going forward and Oman Cricket that comprises Indians, Pakistanis and Omanis are very passionate about the game. They are only thinking about cricket and how to advance and go forward. They have given me the full responsibility. Basically I do everything,” he said.

“My designation goes as the Chief Development Officer and National Coach for Oman. I cover Muscat, Salalah and look after coaching, umpiring everything. We have committees for each different categories of which I am the head. There are two board directors who are working very closely with me. Whatever I do I take full responsibility. Fortunately from the time I took over everything has been going on well which is a plus mark for everyone and for Oman.”

According to Mendis, Oman Cricket has just completed two beautiful green cricket grounds with floodlights and an indoor stadium with seven practice lanes two fast lanes, two slow and three ordinary ones which was constructed by Kaba International Australia. All the offices too have been moved to that complex.

Initially when he went across to Oman, Mendis (66), had reservations about the country and undertook only short assignments with them. “When Pankaj and MadhuBhai wanted me to come I agreed to initially on an assignment basis and did the tours and came back. When they asked me whether I could stay in Oman and take over the development side plus the coaching side and basically their overall cricket I later agreed and settled down with my family.”

“I feel if you want to be successful with a team you ought to have a proper cricket board and that is there. Living conditions are really good and people are very friendly. Especially if you are not happy about the people that you are working with, then it becomes a problem. That is why I was not sure at the start. Later I realized that this is a fantastic place, fantastic people to work with. That is why I felt this is the place for me. If you give me another choice I would definitely put Oman for me to be there,” said Mendis who’s had a glorious cricket career with Sri Lanka as a player and administrator.

Under his leadership Sri Lanka won their maiden Test when they beat KapilDev’s Indians at the P. Sara Oval in 1985. That victory is one of Mendis’ career highlights. The other is his outstanding 111 and 94 against England in Sri Lanka’s first Test appearance at Lord’s in 1984. “I would put those two as the most memorable moments of my career as a cricketer,” said Mendis. “As a cricket administrator I would pick the 1996 World Cup victory.”

Mendis was manager of the World Cup winning team and the Chairman of selectors. He also served as Director National Development and was the CEO of Sri Lanka Cricket from 2003-2010 before settling down in Oman.