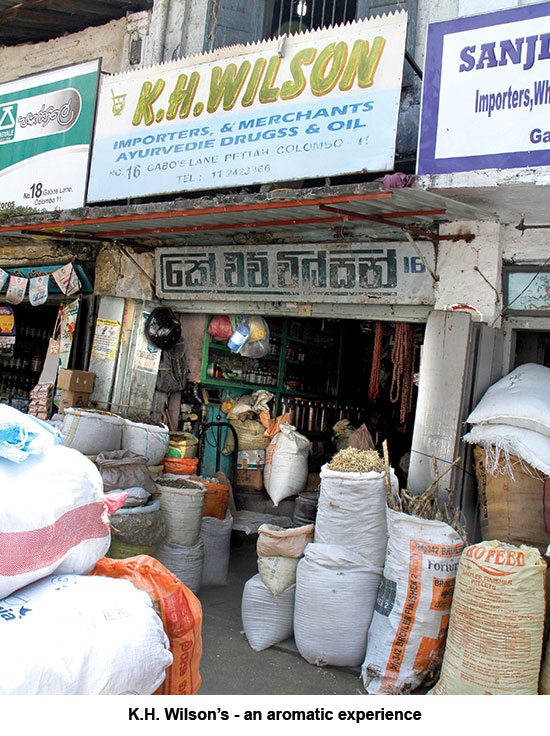 Importers and merchants of ayurvedic drugs and oils for over 80 years, K.H Wilson’s on Gabo’s Lane in Pettah, has been the trusted choice of several generations of ayurvedic physicians and manufacturers of ayurvedic preparations. Wrapped in the pungent aromas of their stocks, Randima Attygalle unravels their little known success story.

The concoction of katuwel batu, weniwelgeta, aralu, bulu, rasakinda and thal sookiri seem to offer a fresh breath of ‘healing air’ to the busy thoroughfares of Gabo’s Lane in Pettah. Tucked amidst the rows of beheth badu kada – the staple of Gabo’s Lane, is K.H. Wilson’s, importers and merchants of ayurvedic drugs and oils. It is a juggler’s task for present business partners of this nearly 85-year-old enterprise- M.A. Dharmaratne and Dhammika Jinendra to enlighten us on its journey while packing thal sookiri for one customer and fetching bottles of bee honey for another!

A hive of activity by mid-morning, beheth wattoru (lists) of fifty or more items demand the attention of Dharmaratne mudalali. We are told by the veteran merchant that wattoru of yesteryear entrusted in their care by weda mahaththayas put the modern ones to shame! “Those days wattoru were so long some, running into more than hundred varieties of ayurvedic ingredients.” The shortage of traditional physicians who hail from ayurvedic dynasties and consumerism which has invaded the age-old healing system often compromise the ‘best quality’ of preparations today, laments Dharmaratne. 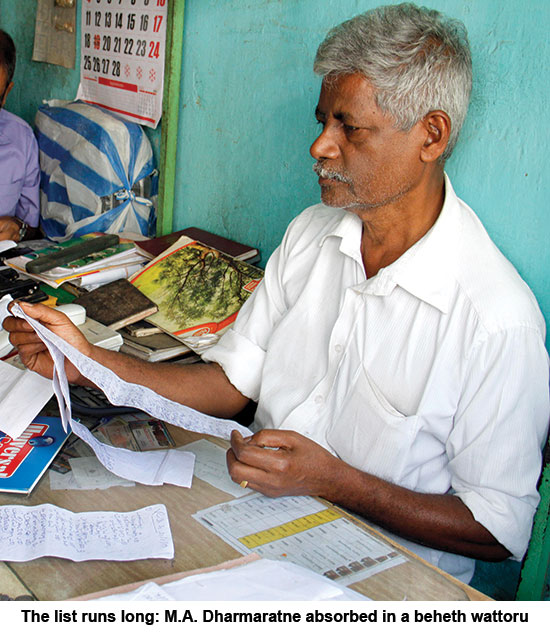 Half a century ago, young lad M.A. Dharmaratne from Balangoda, came to Pettah seeking his fortune. Barely 16 years, Dharmaratne came under the wings of K.H Wilson mudalali, a Southerner from Galle, who taught his young apprentice the ropes of his benevolent trade. A few years before the demise of the old mudalali, his nephew, Dhammika Jinendra from Welipitagoda joined the business in 1986. “Although it was my uncle who started the present business in this shop, it is believed that one Egoris mudalali, who also came from Galle, owned this premises initially,” says Dhammika. Today K.H. Wilson’s has joined the ranks of oldest merchants of Gabo’s Lane.

An antique chair over hundred years old and a ‘House Rent Receipt’ of payment from the early 1940s, amounting to Rs. 60 are among the K.H Wilson’s regalia from yesteryear. Dharmaratne adds with a smile that today they pay a monthly sum of Rs. 4250 to the UDA (Urban Development Authority). Being privy to the winds of change that have not spared Gabo’s Lane’s staple enterprise, Dharmaratne reminisces the days of lee peeppa (wooden barrels) and goni (coir sacks) which stored herbs and oils. These are replaced by synthetic sacks and plastic containers today.

Life at Gabo’s Lane is as thorny as the katuwelbatu sold there. With no parking facility or other easily accessible sanitation facilities, the services rendered by K.H Wilson’s and their counterparts for generations are laudable. The United Ayurvedic Drug Merchants Society of Pettah which lends voice to common grievances and other issues of its members, once launched a valiant battle against their eminent eviction from Gabo’s Lane in the late 1980s as Dhammika tells us. “This lane has been home to us and our forefathers for generations and there was a scheme to evict all shop owners to in order to expand Hetti Veediya (Sea Street synonymous with jewellery shops) which however we braved collectively,” he recollects with pride. 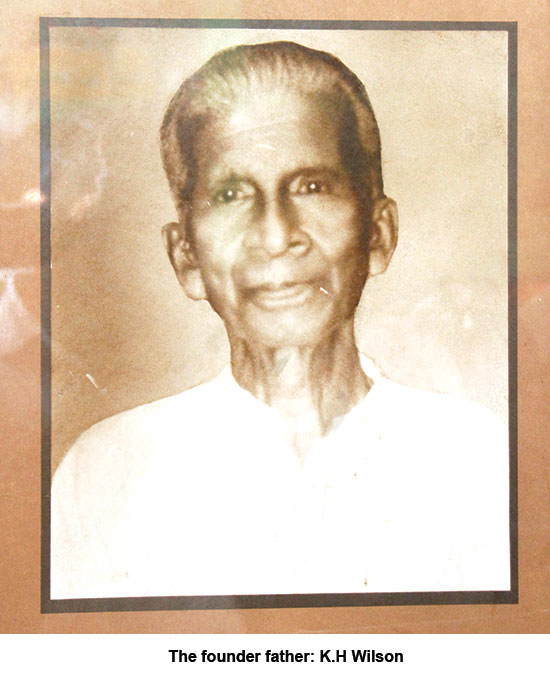 Priding in ‘trust’ the hallmark of their business, which is more a labour of love, present proprietors of this respected business enterprise are sought after by several generations of physicians and manufacturers of ayurvedic preparations from all over the island. While considerable stocks of herbs are sourced locally from Anuradhaphura, Padiyathalawa, Bibila, Moneragala, Weerawila, Embilipitiya, Puttalam and Anamaduwa, ayurvedic oils are largely imported from India. Lamenting that middle men make quite a buck, Dharmaratne urges responsible authorities to intervene to offer them tax concessions and implement schemes to commercially cultivate age old herbs, some of which might be confined to ayurvedic canon soon. The senior businessman is also disheartened that those with no knowledge of either the herbs or the hallowed ayurvedic tradition are today exploiting the mere term ‘ayurveda’ for dubious motives. “Collectors vandalize plants such as veniwel geta stunting or completely destroying their growth and some manufacturers of so called ayurvedic preparations cheat consumers with inferior products. Today sadly we cannot claim the patent right for our very own bin kohomba and kothala himbutu highly sought after by the West for their anti-cancer medicinal properties.” 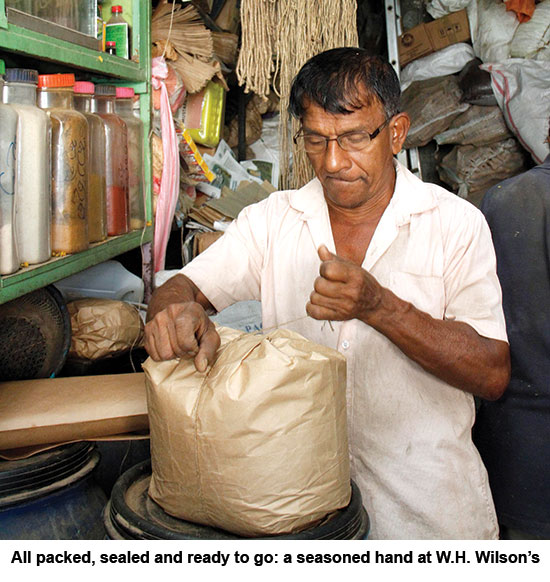 Together with their five golayas Dharmaratne and Dhammika are kept busy serving wholesale buyers and those who seek them for a paltry packet of pas panguwa with equal dedication and courtesy. Replete with a soldarai (attic) and movable wooden floor boards for extra ‘underground’ storage, K.H.Wilson’s is promised to keep vigil on the changing sky line of Pettah for several eras to come….