Telling a story through her architecture

Telling a story through her architecture 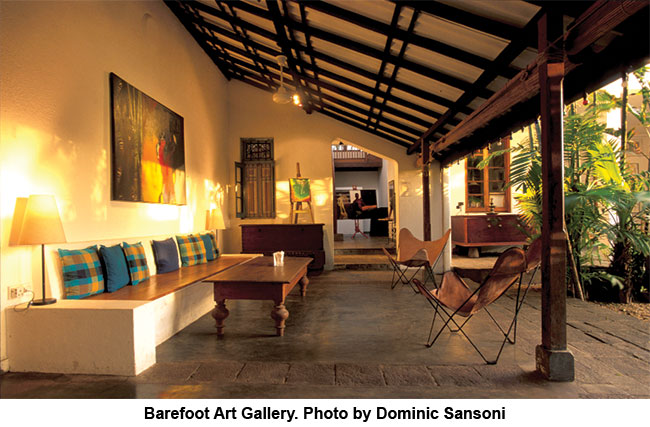 Architect Amila de Mel’s philosophy is to let her work tell a story. Be it a brand-new creation she is taking on or redoing an existing one, she likes her architecture to be a narrative, not only of the people who occupy the space but those who contribute to making it a living, breathing space. Making the story uniquely Sri Lankan too is of importance to Amila with local artistry taking center-stage in her creations.

“I like to get something out of the project for myself and bring people to together: Artisans, craftsmen, my architectural assistants, techniques, materials and work in a team. I like to give a bigger message through my work where the story becomes important,’ she says.

Amila didn’t set out to be an architect and says her choice of career is completely accidental.

“My father wanted me to go to university and I was not one bit interested but gave in and opted for Art School at the Massachusetts College of Art and Design (MassArt) in Boston, USA. I thought art would be fun and I could get away without studying very hard,” she recalls with some amusement.

But as fate would have it, she soon learnt that the Architecture Department at the University had a very good program which she chose to follow and soon began to enjoy the subject. Six years after working in Sri Lanka, she followed this up with a Diploma in Architecture from University of East London.

Amila had the good fortune and privilege of interning under two of Sri Lanka’s celebrated architects C. Anjalendran and the late Geoffrey Bawa in her early days as an architect.

“My career in architecture began working with Anjalendran and Mr. Bawa. I have been very lucky to have worked with them. They were an inspiration and it is by working with them that I developed an interest to look to Sri Lankan artisans for my work.

One of the first projects she did on her own was transforming an old Colonial House into an art gallery, then called 706, behind the iconic Barefoot shop on Galle Road. “This project gives me the greatest joy to this day. The space works as a gathering place and an oasis within the hustle and bustle of the city of Colombo.”

This first project, Amila says, brought to her attention the importance of transformation in architecture, where architects involve themselves in transforming existing buildings so as to uplift the spirit of the users. “This also give life to old buildings and spaces and makes them function better for their new users. Reuse is in my belief a key factor in making a building sustainable over time.”

Another major project that Amila undertook was for MAS Active’s – Nirmana, a product creation centre for their customers including Nike. The work involved converting an old factory building into a functional and efficient space showcasing the high levels of skill that MAS could provide to their product. Nirmana gave Amila the opportunity to work with international designers but also make the centre a uniquely Sri Lankan. 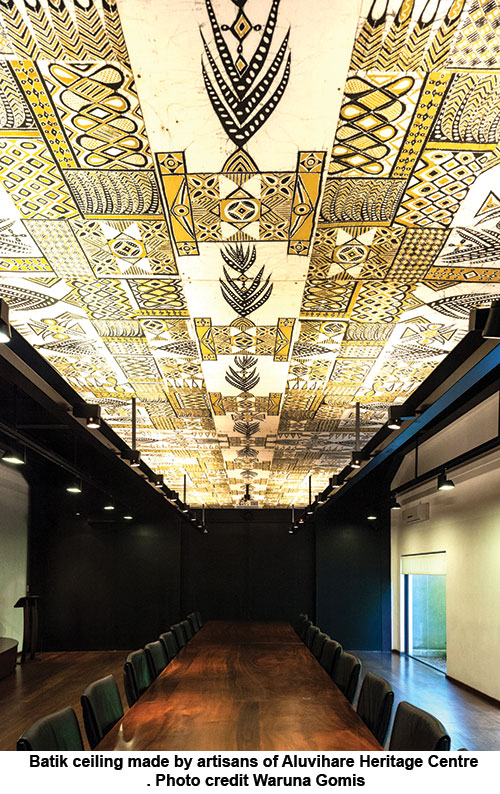 “The conference room features a dropped ceiling in batik while other tapestries created in collaboration with the artists interweaving fabric offcuts from the factory were used. Traditional lace weaving equipment, gems, basket weaving, etching etc. were also used as we took this opportunity to display our traditional designs and craft skills. Together they create an interesting story.”

“There was the need for great care in details in the reconstruction of Ena de Silva’s house. It was like putting together a jigsaw puzzle to ensure that all the parts fit. The value of team work, good supervision and the contractor’s skill was fundamental to the success of this project,” she says.

Amila’s acquaintance with the flamboyant lady was the start of her close relationship with the Aluvihare Heritage Centre, the amazing batik and embroidery center in the village of Aluvihare started and run as a cooperative by Ena de Silva till her demise. Amila remains inspired by seeing the ability of the workers to come together as a team to produce the best quality batik and embroidery and their commitment to detail and precision.

“The ladies at the Aluvihare Centre are remarkable. They have taught me the value of detail. Each item is made by hand. It’s a dying art and there is very little appreciation left for these art forms, but these are not things that can be valued in rupees and cents,” she says.

Amila is determined to keep learning from local artisans and in particularly those at the heritage centre. “Ena started this with and for the women of the village. I am hoping to keep this alive beyond Ena de Silva’s life time. Her legacy must live on.”