The keeper of a crispy experience

The keeper of a crispy experience 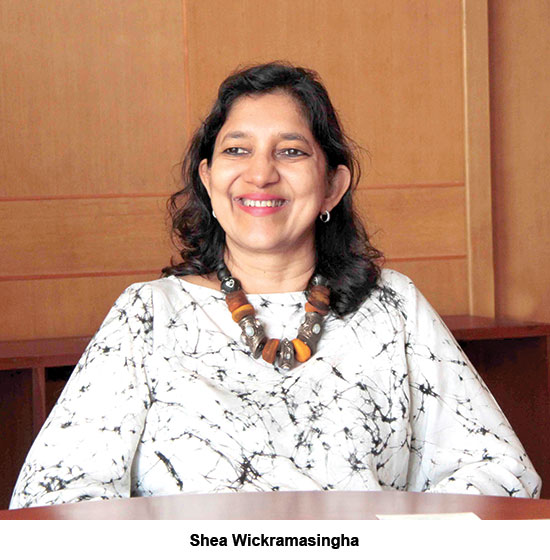 Ceylon Biscuits Ltd (CBL), responsible for the much loved Munchee biscuits,lives in the hearts of Sri Lankans. Its Group Managing Director, Shea Wickramasingha, personifies its idiom of adhering to the best ethics and best business practices running in the veins of its corporate DNA. An advocate of ‘being relevant to changing times’, Shea moots innovation and collective national will to take local agriculture and the food industry to the next level

“Biscuits were certainly an ingrained part of our lives as children, certainly we had a lot of Munchee Biscuits at home,” recollects smiling Shea Wickramasingha, Group Managing Director, Ceylon Biscuits Ltd (CBL). It was after completing her higher studies in Food Science and later in Chemistry in the USA, that Shea became an integral part of the company her visionary father, Mineka Wickramasingha founded.

A product of Ladies’ College, Colombo, Shea read for her Masters while working on projects funded by certain US companies. Her thesis was done for an American company which elicited her research findings. “This is the kind of engagement we need between our universities and industries here at home, where student-projects can be funded by industries and they get exposure to the industrial demands before they actually enter the main stream,” reflects Shea.

Representing an organization which lives in the hearts of Sri Lankans, Shea personifies its idiom of adhering to the best ethics and best business practices running in the veins of its corporate DNA. “Values are demonstrated by how you behave at the end of the day,” says Shea who prides in her team- a melting pot of diversity, for their passion to take their organization to greater heights. “My father’s philosophy when he founded CBL was to enrich and uplift society and this has been at the foundation of all our ventures. We are not just manufacturers, we are more than that; we work with local communities, empower our farmer base which is about 10,000. For us sustainability is at the core.” Adapting technology to suit local needs, creating new markets, innovation and above all, being relevant to changing times, are cited by Shea as the cornerstones of CBL’s success.

Today, with an expanded portfolio to its credit including cereals made out of local grains, chocolates and packeted coconut milk, CBL’s staple- Munchee is present in 70 countries. A pack of Sri Lankan biscuits on any overseas shelf is on par with any international brand of biscuits, asserts Shea who attributes our biscuit-consuming culture not only to the British colonial legacy but also to the confidence local consumers have placed in it as hygiene assured, convenient and value-added food. “Way back in the 80s when I was a teenager, I remember meeting the visiting Marketing Director of Unilever who credited our local biscuit industry as the only Sri Lankan industry at that time which met international standards.”

Munchee’s success story lies in localizing this colonial gift while adding value to the chain, says CBL’s Group Managing Director. Strengthening SMEs and empowering rural farmers remains a top priority to CBL. “They are the most marginalized segments in our society. The recent issue of the pumpkin surplus speaks for it. If we are to enable them a better income, we got to add value.”

Our food industry, as Shea points out, has not evolved and remains under developed compared to several of our regional counterparts. As a middle-income country, we are today placed in a ‘trap’ where our population should be earning at a level where they can sustain a GDP growth which alas is not happening, bemoans Shea, who cites damaging drought cycles and other natural catastrophes which can be mitigated if there is a commitment at national level. If focused, agriculture, as the senior professional opines, can be developed as one of the highest income-generating areas. Citing CBL’s commitment to agriculture, Shea urges this experience to be translated to national level. “One or two organizations alone would not do, there has to be political and policy commitment at national level if we are to address climate change, irrigation, technology and high cost which impact agriculture.” Despite many youth pursuing food science, both academically and professionally, the lack of investments going into the food processing space is inadequate, observes Shea who calls for more proactive industry-university collaborations.

A voice of a corporate which spurs learning experience for the school leaver as well as the more senior professional, Shea elaborates on the ‘creativity’ which is the want of the hour. “The entire system of education we have been following for so many decades stifles creativity in children. Today in the digital world where knowledge is at finger tips, it is human creativity which adds value over a machine.” Critical of the common Asian dilemma of over-dependency on university credentials, Shea advocates for ‘constant learning’ stimulated by creativity. The onus placed on an employer in this regard cannot be underpinned, she adds. “Everyone aspires a career path and skills upliftment, hence employers should enable opportunities,” says Shea who has walked the talk.

Those who join CBL as operators, most often school leavers, are provided with opportunities of obtaining diplomas while working through collaborations with several technical and vocational schools. Internships are also offered for aspiring young professionals, thereby exposing them to the real ropes of the corporate world. Priding in one of the most sophisticated IT divisions and an equally sophisticated engineering division, her company is also designing robotics in-house as means of mitigating the exorbitant cost of European-imported machinery.

Lending voice to rural entrepreneurship of the country, Shea is disheartened by the red tape of most financial institutions which hinder rural skill. A considerable percentage of women who sustain their families with small enterprises, largely, food-related, are left in the lurch with no financial mentoring, she bemoans. “In the informal sector, it is almost impossible for these entrepreneurs to obtain bank loans and they languish with no skills on how to do a business plan, how to extend the shelf life of a product etc,” says the senior professional for whom uplifting the skills of rural women entrepreneurs remains an exercise close to her heart.

A woman who believes in filling a role because ‘one is good at it’- be it a man or woman, Shea does not subscribe to gender stereotyping. “There are inherent gender differences no doubt, yet professionally the criteria should be the best person to play that role- this could be a woman or a man,” observes the proactive corporate leader who encourages more women to take up challenging jobs at managerial levels.

Despite the fact that several Sri Lankan women CEOs are now under the corporate spotlight, the numbers at the higher corporate tiers are still not sufficient she says. Contrary to the common perceptions about the ‘liberated woman’ of the West, Shea believes that more ceilings for gender exist there than here at home. “We have produced several women catalysts of change and leadership in many areas and many ‘firsts’ in several disciplines. Today at provincial level, women leaders are raising a voice despite many odds which is very progressive.” Such strides, however, need to be aligned with modern demands of the world of work, she adds. In today’s digital economy, women should be encouraged to work from home, take up flexi hours etc, which however need legislative and policy backing, says Shea who calls for ‘time investment’ if change is to occur.

A woman playing multiple roles herself as a mother, wife and a corporate trendsetter, Shea takes pride in being a Sri Lankan. Ours is a land possible of many positive changes, she says and this very change she aspires to translate into her corporate setting. “I come to work not for financial benefit but because it gives me a purpose of life to change many lives for better.” A yoga enthusiast, Shea devotes her time to méditation and religious outlets of many a faith. “Today I focus a lot on the spiritual aspect of my life. I’m a Buddhist, but I am also inspired by great religious leaders and thinkers of all faiths. I think this spiritual diversity is one of the best things about our island nation,” she concludes with a smile.