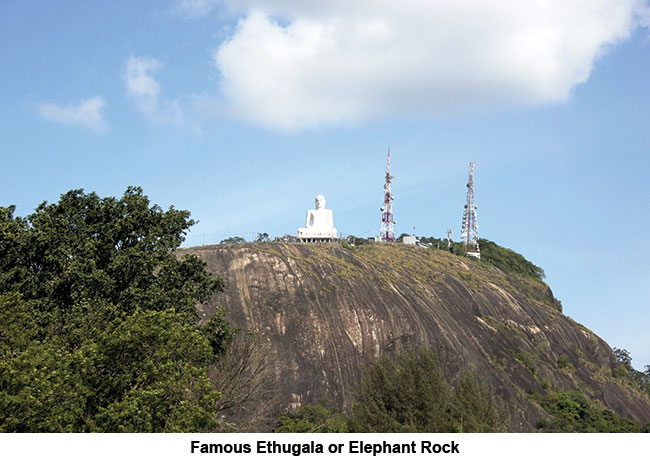 Kurunegala was a rather quiet town in the 1950’s and 1960’s and anyone acquainted with it now will find it difficult to comprehend what the city was in this period. I was in fact a resident till 1974, but by then the transformation to a bustling city had got under way.

For a child the city was awesome with the petrified animals who surrounded the city! The legend was that the animals wished to quench their thirst during a drought and came to the lake which was held to be sacred and they were transformed into rocks and so we have the Elephant Rock, The Tortoise Rock, The Eel Rock, The Beetle Rock and the Goat Rock. Not far from the city was the Yakdessagala from which Kuveni, the consort of Vijaya, is said to have leapt to her death! The lake has itself fantasy wrapped round it, as it was said that once a year a golden bowl would appear and entice people into the water and they would inevitably drown trying to secure it. Of course there were many who bathed in the lake and people did drown probably due to their getting stuck in the mud or perhaps due to being the worse for alcohol as the lake was a popular picnic spot!

It was usual for boys to start their education at the Holy Family Convent in what was called the ‘Baby’s Standard’. We were kept in the Convent until we finished grade one and then we were transferred to the boys’ school which was St. Anne’s College. The Convent was an extraordinary place to start one’s education and we had the benefit of Irish Nuns who were firm disciplinarians and maintained the highest standards of education. The Irish Nuns were also employed at the General Hospital, till they were turned out by a government paranoid about alleged ‘Catholic Action’. The whole community bemoaned the loss of these angels of mercy who performed menial tasks with joy and compassion. 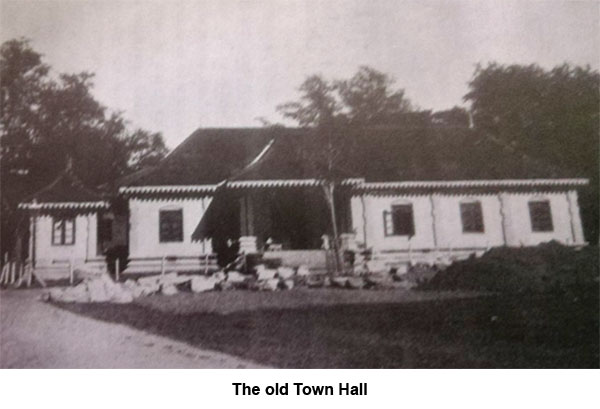 St. Anne’s College also had a few foreign Christian Brothers and was easily the foremost educational institution in the Province. Students came from all over the country to study for the University Entrance. The number of students who gained entry into the Medical College in the 1960’s was phenomenal and envied by many leading schools. The Director (Principal) who usually moved after a stint in Kurunegala to the principal institution of the Christian Brothers which was St. Benedict’s College, Kotahena.

St. Anne’s was also regarded in some ways as a feeder school for St. Benedict’s College when it came to cricket. Lionel Fernando who played for Ceylon and holds a world record for a double century and ten wickets in an innings in the same match was at St. Anne’s.

There was also Maliyadeva College, a mixed school till the Girls school was started in 1946. Sir John Kotelawela who had been the President of the YMBA, in Kurunegala had been responsible for the birth of this institution. Christ Church School, was a small Christian school. There was also the Angangala Vidyalaya which was attached to the Angangala Viharaya. The first time I became acquainted with a strike at a school was at Anganagala and I believe this was in the late 1960’s – and no surprise – was politically motivated.

Municipal Councilors were called City Fathers and our representatives were lawyers, doctors and people of substance. By the time I left Kurunegala in the early 1970’s, there were cab drivers and such like who were ‘City Fathers’!

Kurunegala was not known for being a healthy city and my mother who had lived in the city during its unhealthy years- the 1930’s and 1940’s – related stories of the horror of small pox and malaria which claimed many lives. Headstones of Irish Nuns are found in abundance in the cemetery all of whom had died in an epidemic. The original Wesleyan Church in Kurunegala closed down because the city was facing a health crisis! It is mentioned that virulent diseases accounted for one third of the British troops stationed in Kurunegala. 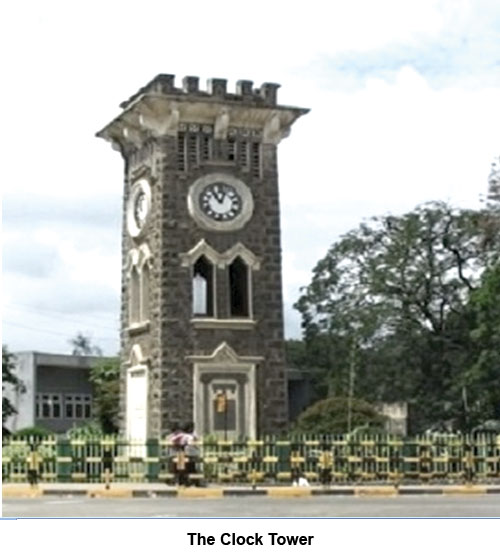 Motorized vehicles owned by local residents were few and many children went to school in carts. It was always amusing to see the carters using a stick to drive the bull faster and the carts swayed all over the narrow roads. When walking on the main roads also it was wise to watch out for the dung and urine! Building materials were transported in larger carts with two bulls yoked to it which moved at a leisurely pace. Lawyers used rickshaws which were pulled by men who were called ‘rickshaw coolies’. There were just a few buses plying and before the CTB was formed the buses were privately owned and operated. The Green Line was one. The town bus service was weak, most people who did not have private transport walked miles to get to town or within it. People were healthier as a result.

On the left is the clock tower which was a reference point in giving directions. The market was a row of open shops and on one side in a corner was the poultry stall. Storing meats was not possible and if you needed chicken one selected a bird and it was culled and dressed as you waited. ‘Wild game’ was available and one could buy ‘wild boar’, ‘venison’ and ‘ wild fowl’ at the door. Our neighbour Rienzie Arnolda had a cabinet full of guns and there were many who hunted in the jungles around the city itself.

We had a rather representative ethnic mix. We had prominent Burgher families such as the Daniels’, Modders’, Markuses’, Pollocks’, Buultjens’, Outschoorns’, Batcho’s and others. They were all respected members of the community and the father and son, Frank and Earl Modder were responsible for some of the most valuable contributions to the Kandyan Law. Bertram Markus was a leading criminal lawyer who became the Mayor of Kurunegala.

Among the leading Muslim families were that of Captain Hameed and Senator Hameem who were businessmen, and MOM Thahir, one time Crown Proctor. The jewellery and hardware trades and eating houses were dominated by Muslim traders.

The leading Tamil families were those of the Thambirajas and the Kandiahs. Thambiraja was a Chairman of the Urban Council and a leading Criminal Lawyer. He was the brother in law of K. Kandiah who was a leading Civil lawyer. They were totally involved with the social life of the city and the Lawn Tennis Club owed much to them. There were many leading businesses which were run by Tamils. Veeravagu was an agent for many consumer products and there was Kandy Stores which was the leading textile shop and a pioneer in garment exports.

We also had Baratha businesses such as Gonsal Brothers which was also a retailer of liquor and Pharma products in addition to other consumer items. There was another liquor shop owned by Paldano and one by Stanislaus Fernando, who became Mayor.

In front of the clock tower was the Court house with the buildings closest to the road being occupied by the District Court and on a side was the Magistrates Court. There were many outstanding members of the Bar at that time.

On the rock adjacent to the lake, stood the Power Station as we called it. The generator was tasked with supplying the needs of the town and the Station was managed by an engineer called Patterson. When the generator failed for days we could be without power and all the curses were directed against the poor man!

Functions such as weddings and official meetings were held at the Town Hall which was regarded as a modern building in the 1950’s. There was also the Masonic Lodge which was available for functions.

Kurunegala was always somewhat sports crazy. There were two tennis clubs, the Lawn Tennis Club and what was called the Upper Club, which was a rather exclusive club originally. The club’s membership was essentially the key public servants, planters and doctors. The Lawn Tennis club was dominated for many years by lawyers. The Kurunegala Sports Club was a cricket and billiards club. The picture shows a group photograph taken at a Law Medical Match which was an annual feature of the sports calendar in Kurunegala. In the background is the Town Hall which is in front of the Peoples Park also called the Maliga Piittaniya (Palace Grounds). Below is a picture of the Maligawa (Palace) which stands in the premises where the original Royal Palace had stood.

The Maligawa was the official residence of the Government Agent (GA)! The stature of the GA was always unquestioned and I recall during this period we had persons of the calibre of Herbert Tennekoon, later a Governor of the Central Bank and ambassador as GA.

Kurunegala was regarded as a great place for government servants to retire to. It was also a great place to grow up in! What exists today makes one pine for the old days when the city had such great character!

The writer was born in Kurunegala and spent his formative years there. He also practiced as a lawyer in Kurunegala from 1968 to 1974. He is a legal consultant and the former Director General of the Employers’ Federation of Ceylon