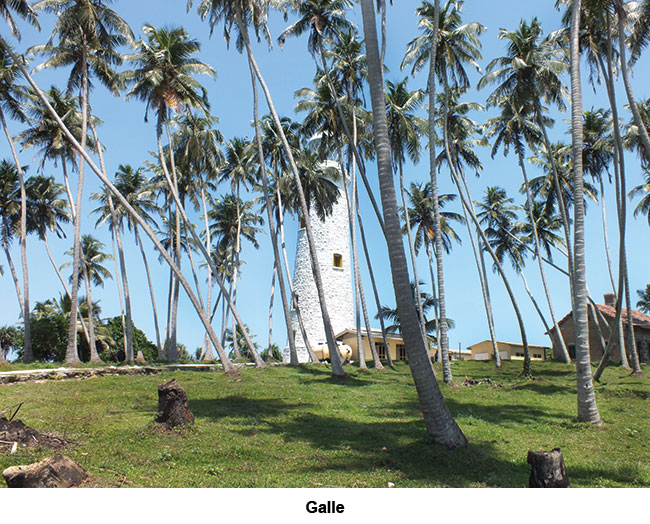 Driving down South as we pass Matara and reach Devundara (Dondra), southernmost point in Sri Lanka, we are about to enter ‘deiyanne rata’ – god’s territory. Following tradition there are not many who pass Dondra without visiting the ‘devale’ and get the blessings of Vishnu deviyo, the deity overlooking the area. One cannot miss the Dondra Lighthouse, the country’s tallest lighthouse with a height of 49m (161 ft). It is also one of the oldest lighthouses in Sri Lanka dating back to 1889. It is also accepted as one of the tallest in South Asia.

A lighthouse was basically a tower designed to emit light to warn or guide ships from a system of lamps and lenses. Using as navigational aids for maritime pilots at sea, oil fires had been used in the early days.

Most of the lighthouses in Sri Lanka were built during the British administration (1796 – 1948).

Dondra Lighthouse had been designed by J N (later Sir Nicholas) Douglass, a British civil engineer renowned at the time as a prolific designer and builder of lighthouses. It is reported that all the building materials including bricks, granite rock and steel were imported from England and Scotland.

It contains 7 floors, 14 two-panel yellow colour windows and 196 steps to the top. The climb is quite easy the steps being at a very convenient height. I remember going up once while spending a holiday with a friend in Matara from where the distance to Dondra is just six kilometres.

Being in a strategic position in the deep-south it is treated as one of the key lighthouses of the island. It was modernised in 2000 with the introduction of what is known as the ‘Differential Global Positioning System’. It is now computer linked to the other major lighthouse around the coast. 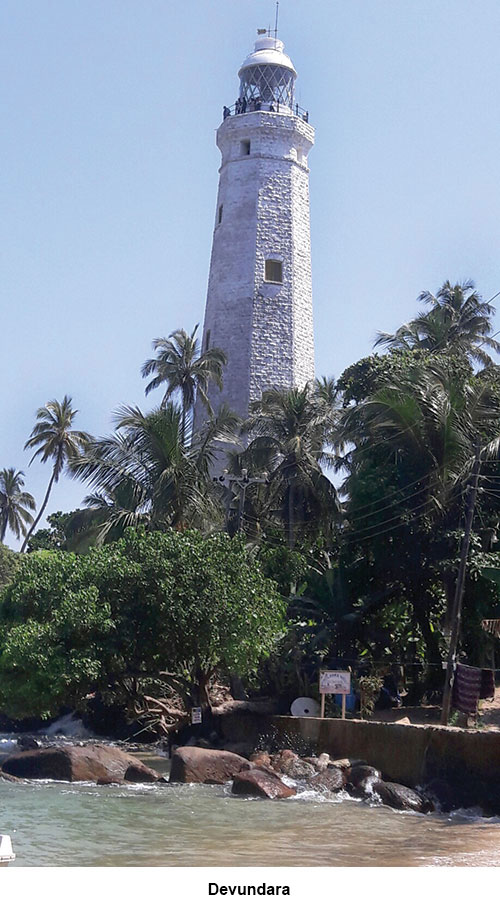 Dondra lighthouse is one of four international lighthouses in Sri Lanka- the other three being at Great Basses and Little Basses (in the Deep South) and Barberyn (Beruwala),

The Great Basses Lighthouse dating back to 1873 has been built on the east rock of the Great Basses reef situated 80 miles east of Point de Galle, on a hard sand stone rock rising six feet above mean sea level. The nearest point of land is Kirinda which is 10 miles away. The 125 feet high lighthouse is one of several designed and built by J N Douglass. Granite for the base of the tower was obtained from Dalbeattie, Scotland and for the tower itself from Penryn, Cornwall. It had taken three years to complete the construction.

An active lighthouse, it releases a white flash every 15 seconds. The mode of illumination has changed over the years from coconut oil to petroleum vapour to electricity and now solar power.

Little Basses Lighthouse built in 1878 five years after the Great Basses Lighthouse, is also active with two very quick flashes every 10 minutes using solar power. Built by J N Douglass and his team, the same materials used for the earlier lighthouse, equipment and skills had been used for this too. The distance is 100 miles from Point de Galle and 20 miles from the Great Bases Lighthouse. It is located on a reef earlier known as Kuda Ravana Kotuwa, renamed by the British as Little Basses, a word derived from the Portuguese ‘baxos’ meaning shoals. The name has been given to a line of reefs off the southeast coast off Yala National Park Block II. The lighthouse is 111.5km from Kumbukkan Oya and can be seen from the beach on a clear day.

Except for two outer galleries, the rest is the same as the one at Great Basses. A black Day Mark Band has been fixed half way up the tower for mariners to differentiate between the two lighthouses during daylight hours.

It is likely that the two lighthouses on the two Basses were mainly intended for the benefit of ships going to Australia passing a long way to the south.

The Barberyn Lighthouse built in 1890 is situated in the island named Barberyn on the south-western coast near the town of Beruwala. It can only be reached by boat. The focal height of the round stone-embossed tower painted white lighthouse, is 46 meters (151 feet). The white light flashes every 20 seconds and is visible up to 27 nautical miles. The glass of the tower is still the original glass installed by the British when the lighthouse was built. It is open to the public.

Lighthouses were first built at the main ports starting with Trincomalee in 1845 in the east coast followed by Galle in 1848 in the southwest, and then in Colombo in 1860 on the west coast.

There are three lighthouses in Trincomalee all built in the 19th century. The Chapel Hill lighthouse (1845) is on a small island in the bay. Still active it releases a white flash every 10 seconds. The other two have been built in 1863. Of these, the 21 metre (69 feet) Round Island lighthouse is located atop a small island in the bay. Foul Point Lighthouse (also called Sampur Lighthouse) is at five levels with stairs. Its height is 32 metres and has a diameter of 25 metres.

Coming down the east coast the Batticaloa lighthouse had existed since 1913.

In northernmost point of Sri Lanka is Point Pedro Lighthouse (1916). The focal height of the tower is 31 meters (102 feet) and it flashed a white light every five seconds when it was active. The flash could be seen up to 10 nautical miles. It is a round concrete tower painted in white. Controlled by the Sri Lanka Navy, the lighthouse and tower is presently not opened to the public, even though the surrounding area is inhabited by people.

At one stage in addition to Point Pedro there had been five other lighthouses in the Jaffna Peninsula. They were situated in Kankesanthurai (1893), Kovilan Point, Fort Hammenheil, Jaffna Obellak and Pongudutivu.

Oluvil Lighthouse (1999) is the first lighthouse built by Sri Lankan authorities with the commissioning of the Oluvil fisheries harbour. It is situated on the eastern coast 12 km from the town of Kalmunai. Its focal height is 25 meters (82 feet). The white light flashes every 10 seconds. The white cylindrical tower suffered minor damage from the 2004 Tsunami, but since been repaired. It is also open to the public.

The writer is a senior journalist who writes on a wide range of issues.