I know the Law!

I know the Law! 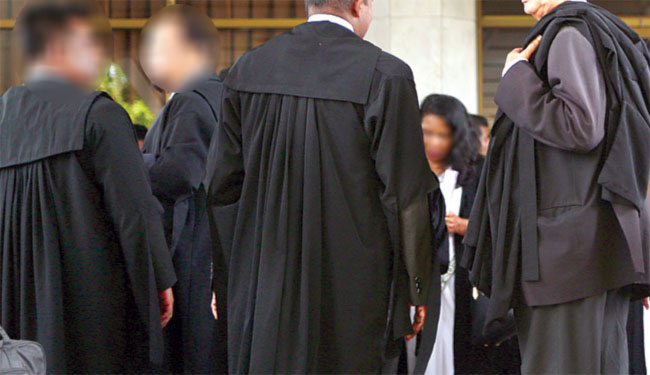 It’s orientation time at Law School. A gathering of youngsters looking nervous, bewildered and confused sit almost motionless completely segregated from the opposite sex. When asked why they are here; they would explain to me in a very diffident manner the reason why they joined Law School.

‘Because my uncle is a lawyer’

‘My mother asked me to.’

‘I could not get into Medicine or Engineering’

are usually the common answers anyone would get from the new entrants admitted to Law Schools in the country.

Very rarely would you get a response which reflects a true desire to acquire the requisite skills and become an eminent professional who could face up to the most formidable of challenges of what Wolfgang Friedmann would refer to as: “Law in a changing society.”

Who is a lawyer ?

The definition is a dynamic and evolving one. The lawyer and his job description has been chopped, remolded and expanded since colonial days. Even at present it depends on who is formulating the job description to this noble professional.

Although I am currently in active legal practice, in the past I have been wearing the hats of trainer, academic and civil society activist. At that time since I did not represent clients in court I was often relegated to the backwoods of the legal profession.

Mario Gomez in his erudite monograph titled: Legal education for social change, states that the legal community contains a hierarchy with practitioners on the top end of the hierarchy, academics and other lawyers employed in the private sector, and legal activists at the bottom of the scale.

This does not happen in other jurisdictions. A legal professional advocating in courts or working out in the field is accorded the same respect and recognition.

All these bizarre perceptions of men and women in black suits have made me reflect as to who a lawyer is.

My notion of a good lawyer would vary widely from what others think.

To me a good lawyer is, in the modern Sri Lankan context would be first and foremost a voracious reader and an avid researcher who is involved in the study of multi–disciplinary approaches on how to use law to bring important changes to societies. Someone who strives to identify the need for substantive and institutional legal reform, a person who continuously critically evaluates specialized problem areas such as taxation, urban development, family planning, regional machinery studies and very importantly the international system in relation to developing countries. This kind of research is vital as it leads to greater distributive justice, political participation and the development of new processes and institutions to deliver popular justice. This kind of learning and understanding will enable the members of the legal profession to participate more meaningfully in different development tasks.

Sadly, to many of us in Sri Lanka being a lawyer means ‘getting hold’ of a client and making some sort of a submission on his or her behalf and collecting a fee.

Is this effective lawyering?

The National Association of Community Legal Centres in Australia in their thought-provoking publication titled, Real Law, Real People: Adventure Lawyering, speaks of the need for lawyers to pursue justice far from city lights.

Judging by the exorbitant fees charged by the members of the legal profession and the lack of Pro Bono culture in Sri Lanka one could say that legal profession caters only to the elite in this country.

Former Chief Justice of India Justice P.N.Bhagwati spoke of relieving legal poverty. Legal Poverty according to his Lordship was the incapacity of large numbers of people to make full use of the law and its institutions.

How do you arm young people to be effective exemplary legal professionals?

The classroom should be taken out of state-of-the art buildings to areas where the ‘real’ people are. In his fascinating autobiography titled Bar, Stage and Platform H.C. Merivale speaks of maps of colonies hanging in the room of a Minister.

He writes: “Many an hour have I spent there in my boy-days looking on them with awe; but not with profit, being one of the many who never could or never can, get away ideas of geography except by visiting the places for myself. The fact that Malaga, till I went to that incomparable capital of health and climate to stay, lies as far as the south lies as the southern most point of Sicily, never assimilated itself to my mind.”

Similarly, students imbue very little from textbooks and lecture slides; it is taking them to where the real people are, and interacting with people with grievances and those who are facing formidable problems and struggles that will arouse the students’ curiosity, develop their creativity and transform them into vibrant and productive problem solving lawyers.

Victims of all kinds of violence, (physical violence, cultural violence, societal violence, economic violence, emotional abuse) people crying out for justice, the oppressed and the humiliated should be the direct focus of the law teaching and learning experience. Students should be assisted to acquire the art of learning by observation. In order to develop their powers of observations opportunity should be made in the legal education curricula to visit temporary shelters, orphanages, remand homes, prisons, slum dwellings not forgetting police stations, alternative dispute resolution settings and court hearings.

The students should note down their observations and discuss and make recommendations.

Furthermore, students of law should also be up to date on national and international current affairs. Their research and assignments should focus on national and international problems and solutions. It is important that guidance is given in law schools on how to read and assimilate what appears in the daily newspapers from the scanning of headlines, reading the editorial, spotlights, exposures and even the interpretation of political cartoons.

The importance of writing skills cannot be underestimated.

In 2008, the BBC reported how an angry Judge branded a Prosecutor member an “illiterate idiot.” The indictment drafted by the officer accused the defendant using an offensive weapon, “namely axe”; instead of “an axe”.

“This is supposed to be a Centre of Excellence. To have an indictment drawn up by an illiterate idiot is not good enough.”

‘Howlers’ such as the one mentioned above can happen either due to lack of English Language proficiency or due to carelessness. In this modern day and age of texting and sending short messages where words are spelt in absurd contracted forms, putrid writing skills is the order of the day. Law schools should therefore be conscious of this drawback and go all out to remedy this handicap among future lawyers.

One of the oldest law schools in Asia- the Government Law College situated in Mumbai has recognized that there is a strong connection between Law and Literature. Law cannot be studied in a vacuum. Studying literature enables students not only to improve their language skills but comprehend how human beings play their roles and sort out their various tangles and tussles they encounter in life’s journey. Avirup Mondal a student of this esteemed institution explained how law students get exposed to gems of the literary world such as the Court Scene of Shakespeare’s Merchant of Venice, Bennet’s estate in Pride and Prejudice, get to know about Totalitarianism in Animal Farm, the futility of war in the Diary of Anne Frank and the violation of basic human rights in Orwell’s 1984.

Instead of parroting and regurgitating a second hand note law students should arm themselves with essential skills such as legal reasoning, communication skills, writing skills, presentation skills and negotiation skills.

A lawyer must be a good presenter. Richard Du Cann in his famous book, The Art of the Advocate states that, “clarity and order are essential ingredients in the deployment of the words at his command. If there is some gracefulness in his speech and if his voice is pleasing to the ear so much the better. Instead of participation in a stray debate or Moot just to tick a box and add a line to the resume, students at law school should be made to ‘speak out’ and go even to the extent of disagreeing and arguing with the lecturer, which is something I practiced and encouraged when I taught at law school

From where do we start?

Students who are enrolled as Attorneys-at-Law take an oath that among other things that they will act in line with the Constitution. The Constitution of Sri Lanka gives clear guidelines as to what is required to strengthen the ideals of democracy.

The opening words of our Constitution speaks of the people of Sri Lanka.

Fali Nariman the renowned Indian Legal luminary writes about the Constitution in the following manner:

“The opening words of the Constitution-“We the people”- tell us at the start who the Constitution is for? But in a pluralistic society like ours, in a vast subcontinent like this, in a land of “ million mutinies, WHO really are the people? For me, they are all typified in that great cartoonist Laxman’s “Common Man”. Not long ago, a Former President of India unveiled in Pune, an eight feet high bronze statue extolled as the ;world’s tallest metal statue of a cartoon character’.It typifies as no other single manifestation does, the quizzical doubts of the Common Man whom this great document is for; every generation throws up its common man…..”

What then is the role of the Sri Lankan Lawyer?

Every legal professional in this country should strive to take the Law to the people and make the right to access to justice, a reality. This can be done by training learners at law school and arming them with skills needed to respond speedily and effectively to the inequalities and injustices prevalent in our multifaceted society.

The writer is a lawyer and the founder of Sisters-at-Law which provides free legal services for abused girls and women and empowers them to integrate into society. One time Chairperson of the National Child Protection Authority of Sri Lanka, Marini’s advocacy work has been internationally recognized.