Keeping steps to his rhythm

Keeping steps to his rhythm 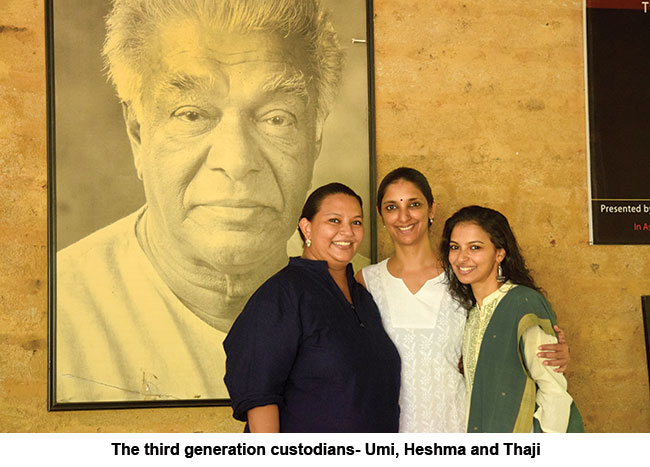 The third generation which keeps guru Chitrasena’s legacy alive, reflects on what shaped the idiom of the doyen of modern Sri Lankan dance

“I think it was a match made in heaven for the dance and they became virtual magnets to us,” is how Heshma Wignaraja, Artistic Director of the Chitrasena Dance Company, daughter of Anjalika Chitrasena (Melvani) and grand daughter of Chitrasena and Vajira encapsulates the rhythmic journey of her legendary seeya and achchi. The third generation custodians of the Chitrasena Kalayathanaya, Heshma together with her cousins Thaji (Thajithangani) – the principal dancer of the Company and Umi (Umadanthi) Dias who administers the Kalayathanaya keep the hallowed traditions of their temple of dance alive today.

A constant reminder of guru Chitrasena’s belief that the ‘new is an extension of the old,’ Heshma tries to do justice to the sensibility or ethos passed down to her. “It has been left to my own interpretation for the past 13 years since seeya’s demise – always mindful of the artistic principles, the spirit and the nuances in which we have been mentored,” reflects Heshma and adds, “what you do matters but how you do matters even more.”

The precise ‘line’ and ‘form’ which make up the Chitrasena-Vajira idiom have been through a ‘natural evolution’ over many years. With daughters Upeka and Anjalika, continuing to add to the expression of their parent’s artistry, the third generation torch bearer Thaji (daughter of Vajira’s and Chitrasena’s son Anudatta) is recreating history set by their iconic grandparents- on the global stage .

The inspiration to innovate and create what is uniquely Sri Lankan lies in tradition and rituals, points out Heshma. They are the very rituals which gave birth to the genre her grandfather laboured to create. “The challenge before him was to retain the original ritual and create a contemporary repertoire for the modern stage. He saw that the ritual was losing its purpose and felt there must be a way to distill it and give it a new life.” In this exercise of emerging as a dancer in his own way, and enabling a ‘stage of dignity’for the other dancers at a time that the derogative terms of nettukkari was attached, particularly to the female dancer, Chitrasena encountered hostility. “When the dance arrived on the proscenium stage for the first time- there was antagonism both by the traditional ritual artistes and the bourgeois class. The English speaking community scorned it as if it were a –primitive art form that had no right to be on their stage. The traditional artistes didn’t approve of dancers and drummers sharing the same platform and having equal respect, as the drummers were considered low caste. In fact there was no place for a woman in the ritual so he created one for the stage.. He broke all these barriers,” reflects the granddaughter. 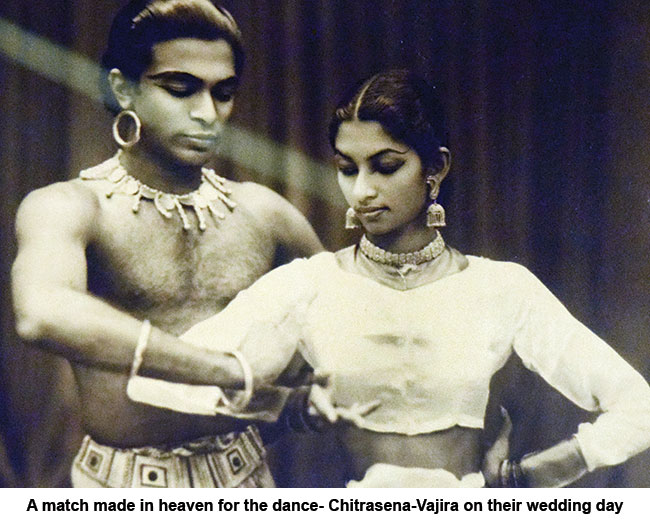 From the 1940s, ever since Chitrasena and Vajira started creating their own genretogether, the entire family along with their golayas have been in rehearsal, says Heshma with a smile. For them it will be a journey of experimenting and discovering the possibilities of a “movement language like no other” and as Heshma avers, there is a spring of information yet to be discovered about our own traditional dance forms with its history of 2500 years. “We will have to live for a very long time to know all that,” she adds with a chuckle. In this experimental journey, Chitrasena Dance Company has created waves. Since ‘Barefeet in Motion’- a performance created for Barefoot about the life of the fabric in 2003 a few years before the demise of the guru, there has been no looking back for Heshma. A mutually proud and an emotionally charged moment for both the grandfather and the granddaughter, the artistic endeavour became Heshma’s bugle call. “I remember seeya calling me to a side after that open- air performance and telling me ‘you are ready now’ reminisces Heshma for whom it was the beginning of ‘swimming against the tide’ as her grandfather had always done.

Recollecting the vacuum her grandfather’s demise created in their lives “unable to comprehend how to fill his shoes”, Heshma says, “it was a case of either shutting down or moving on the best way we could as seeya used to drill into us either you do itright or let it die a natural death.” The Art of Chitrasena produced by Heshma for the guru’s first year death remembrance in 2006 was inspired by the memorial done for the American dancer and choreographer Alvin Ailey which left her “completely moved” as Heshma describes it. Excerpts of Chitrasena’s and Vajira’s work and with her own segment, the production was well received. This was followed by Kumbi Kathawa in 2007, (a production that is now in the O/L syllabus) involving 60 children which, she realized for her mother Anjalika who had been labouring on it for several years. “It’s a bit like each experience has opened the door to another.” Dancing for the Gods, Devanjali and Samhara followed suit.

Samhara which the Chitrasena’s collaborated with the Odissi dancers- of Nrityagram Dance Ensemble from Bangalore was a critical turning point for the ‘younger dance company’ led by Thaji. Samhara as Thaji looks back enabled us to take our traditional Kandyan dance to newer heights. Their bonding as a family was further cemented by Samhara says Thaji. “We would be working in this kuti and wake up to the sounds of drums or musiceveryday we worked in India. It was a phenomenal experience.” Devanjali which toured in Australia earned Thaji critical praise. Stardom has only made Thaji humble. “Whenever I see dance being invaded by commercialization, I feel stronger about what I am doing. I feel blessed to be part of a great legacy.” Only a young girl of 16 at the time of her grandfather’s demise, Thaji was not privy to him being actively involved in the Kalayathanaya. Yet her aunt Upeka, who has been her guru for the longest time of her professional dancing career, has compensated says Thaji smilingly. “Living and breathing in their temple of dance on a daily basis can make natural connections,” she adds. 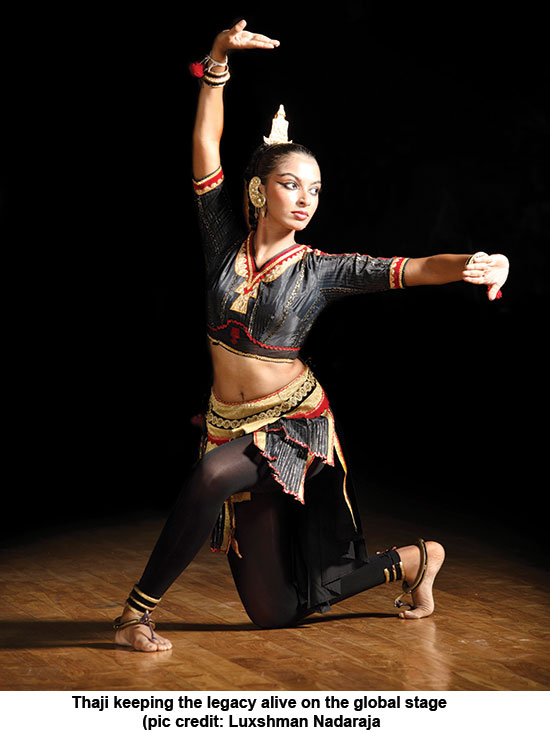 “Beautiful creations don’t come easily, they come with a lot of clashes, opposition and arguments I feel,” says Heshma for whom her grandparents remain a constant ‘wonderment’. “Neither of them could have become what they became if not for each other,” she adds fondly. Astounded by her achchi’s idolization of her seeya, she surmises: “it is hard to fathom what she went through to be his partner, but the beauty of it is how archchi unconditionally idolized seeya. She is forever grateful to him and to date nothing could be said wrong about him even good humouredly!” Thaji endorses her cousin’s view and adds that watching a video of seeya and achchi in a rhythmic movement in Russia way back in the 1950s was a ‘whoa moment’. “We found this very old clipping of the couple and I’m told that my father was only three months at the time of this performance! They looked a perfect match but today when archchi looks back at this performance, she says she could have done much better!” says Thaji laughingly.

In a bid to recreate the ‘communal experience’ of a traditional guru gedera where dance, music, singing and drumming blend with everyday living, Chitrasena Kalayathanaya is in the midst of setting up one where all gurus in the Chitrasena family especially Vajira and Upeka can ‘live and breathe’ the dance with their students. Heshma who was fortunate to have experienced this way of life as a child waking up and going to sleep to the rhythm of drums, labours to recreate it for the next generation. The guru gedera which is to receive the architectural mastery of the celebrated architect C. Anjalendran, will also be an abode for the visiting gurunnanses who have been associating the Kalayathanaya for years. As Heshma reflects: “just to be able to see the gurus-at the start of the day would be a blessing.”