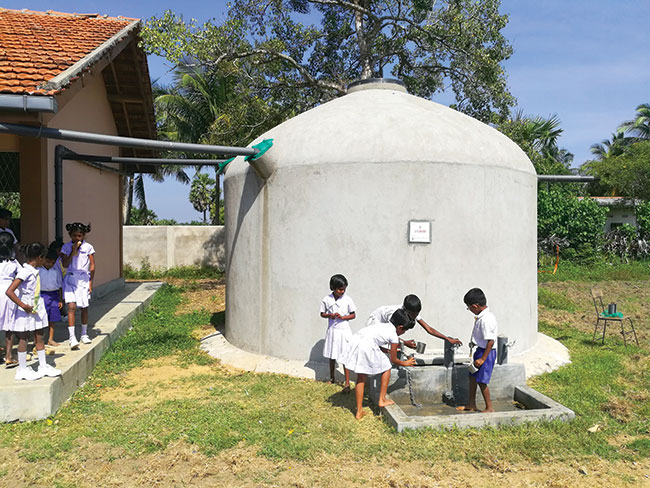 Water is essential for all living organisms. Water is also important for the sustenance of biodiversity, ecology and overall health of the planet Earth. Water also has social, environmental and cultural value in additional to its economic value.

The United Nations declared that safe drinking water is a basic human right in 2010. The world water supply status shows that 12% of the world population is still without an acceptable service. Sustainable Development Goal 6 (SDG6) -one of the 17 SDGs established by the UN in 2015, calls for clean water and sanitation for all people by 2030. Sri Lanka boasts of leading the south Asian region having the highest coverage for drinking water for its population ( 92%). However in the last few years the frequency of climate disasters in the country such as floods and long droughts have caused water stresses to people in almost all districts. Today Sri Lanka is positioned second in the recent ranking based on vulnerability to climate change.

In 2014, the government has spent nearly Rs. 2 billion for assisting drought victims, but these are mostly ad-hoc measures. Even though people and various organizations have come forward in distributing bottles of drinking water and water storage tanks among the affected people, such measures enable only immediate relief. The country is in dire need of a more sustainable solution.

Lack of water in an agro-based rural economy will also adversely affect the socio-economic well-being of the community as well their resilience to adopt to disaster. Women will be affected most since they hold more responsibility in ensuring household water supply. In a water scarce area, they spend more time in fetching water, limiting women’s involvement on other socio-economic activities.

Recent climate change prediction studies have indicated that Sri Lanka will experience high variability of rain fall. That means wet areas will get wetter and dry areas will be more dry and intense rain can be expected within a short period. The island receives an average rainfall of 2000 mm yearly. Out of the total water received by the island, around 60% escapes to the sea as run-off. Therefore the simple solution in this case is to increase the retention of water that is received during the rainy periods to be used during the dry season. Realizing the importance of rain water harvesting (RWH) as a solution to overcome the water scarcity in the country, the government passed a national policy on RWH in 2005. Legislation which followed has made RWH mandatory in new buildings above a certain roof size in urban and municipality areas since 2009. RWH in the form of collection and storage in a tank or retention in the soil and ground will be a good option for communities facing water shortages during non-rain period.

Beyond domestic use, RWH can be used for agriculture, soil conservation and environmental management. RWH is also used to reduce peak flows in drainage discharges to reduce flood risks through the use of permeable surfaces and green infrastructures e.g. sponge cities in Korea. RWH also help to reduce poverty by increasing agriculture productivity in very low rain fall places such as North Eastern Brazil, the Loess Plateau of Gansu in China and Eastern Africa which receive an annual rainfall around 300-400 mm.

In order to achieve SGD6 of universal access to safely managed water by 2030, RWH is a must. Many countries are struggling to model how their future rainfall patterns will develop and what can be done to make best use of the rain that falls.

Rainwater is a valuable resource, which should be exploited in the most efficient way. Governments should explicitly recognize RWH in their water supply policy to encourage and promote it for human consumption and domestic use to protect the people’s health and livelihood and ensure good utilization and conservation of water resources, and facilitate guidance and capacity building. Remember Rain is Water.