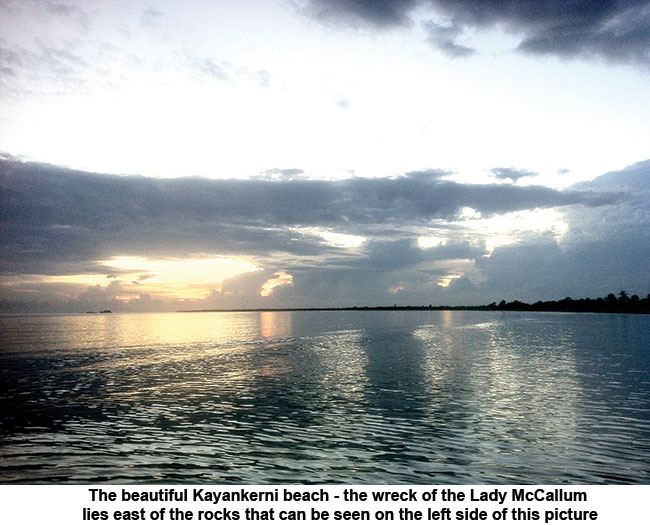 It is January 1st 1926. As Ceylon heralded a brand new year, the passenger cargo vessel SS Lady McCallum, a 1100-ton twin engine steamer, belonging to the Ceylon Steam Ship Company (CSSC), was heading north, off the coast of Passikudah, in the east coast of Sri Lanka. Heavy monsoonal seas prevailed during that time of the year and unbeknownst to her master and crew, she was courting grave danger by sailing too close to shore with a dangerous shoal of submerged rocks, undetectable from above the surface, just below her direct path. The ship’s engines were working at full speed, churning out 191 of nominal horsepower as the 67 metre long steel hull of this Caledon Ship Building & Engineering Co. built ship heaved and hawed on an ocean in turmoil. Rough incoming waves, crashed onto her starboard side, gradually pushing her closer and closer towards dangerous shores.

Then it happened. With a sickening and jarring crash, she ran aground on submerged rocks just five miles north of the Kalkudah Jetty. Owing to the catastrophic damage to the hull, her subsequent demise was rather swift. Within half an hour of striking the rocks, she sank to the bottom of the ocean and rested on seabed 17 metres deep. However, during that very short time the crew managed to save all but two passengers who had been on the deck at the time she ran aground the rocks.

A few days later, survey ships approaching the scene could only, and barely, see the top of her funnel and masts. Meanwhile small quantities of ship debris and cargo washed up the shores in vicinity of her final resting place.

Such was the sad fate of the Lady McCallum, once a proud vessel that had been a key member of the Ceylon Steam Ship Company (CSSL) which owned a fleet of Lady Ships. 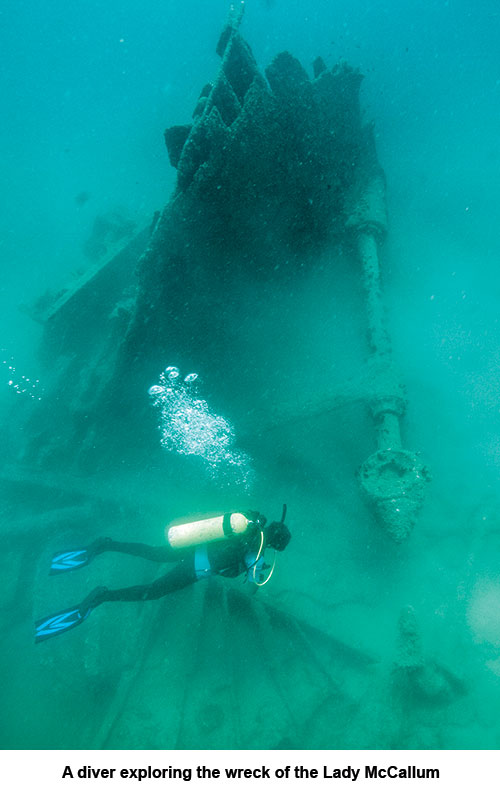 These Lady Ships had played a vital role in the economy of the island in those bygone days. In addition to the Lady McCallum, the CSSL fleet had included other steam ships such as Lady Havelock, Lady Blake and Lady Gordon. These ships ran a regular service around Ceylon sometime during the 19th century and the 20th century. Named after past governors’ wives, one of these ships departed from Colombo every other Wednesday, sailing around the island and stopping over in Galle, Hambantota, Batticaloa, Kalkudah, Trincomalee and Jaffna, before returning back to Colombo on a Friday. This service was especially useful during an era where there was no rail access to Batticaloa until the 1920’s.

The Kalkudah Jetty was completed in 1901 and its remnants are still seen at the Kalkudah beach. During good weather, ships would anchor in the deeper waters allowing the passage of goods and people back and forth in smaller boats that were capable of berthing at the Jetty. Therefore,it is not surprising that it is off Kalkudah that the Lady Havelock met her ultimate demise on March 10th 1907. A slightly smaller vessel than the Lady McCallum, her master ran her aground on the beach to save her passengers and cargo during a cyclone.

A year later, another of the early ships in the company’s service, the Lady Gordon, which had been launched in June 1888, saw the end of her service at a scrap yard in Bombay.

The same year saw the Lady Blake launched to start her service with CSSL. Subsequently, she changed ownership in 1922 before resuming service again with CSSL in 1926. However, four years later, she was sold to a scrap metal yard in Bombay for a princely sum of Rs. 20,500. 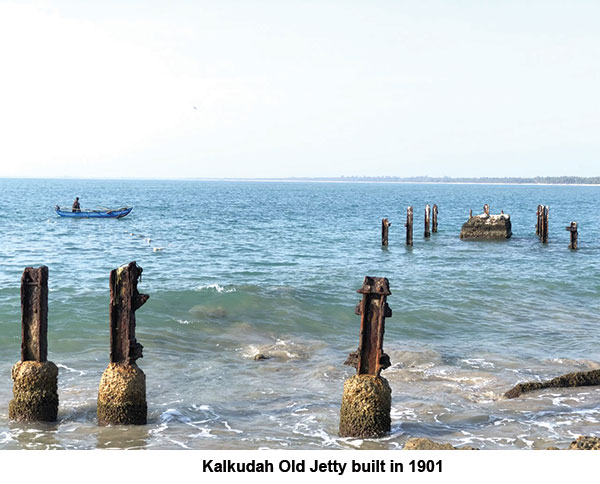 In mid-2011, I was exploring the seas north of Passikudah for shipwrecks and reefs. These areas had opened up after the abrupt end of the civil war in 2009 and provided a completely new arena for discovering new dive sites.As a result, I was introduced to Colombage Jagath Lal, a local resident who owned a fishing and fish collecting business and was familiar with the seas in his backyard intimately. On my request to show me new shipwrecks in the area, Lal took me to one, which he referred to as the Allison & McLeelan wreck owing to an inscription on an engineering instrument he had found at the wreck. However, I doubted that this was the real name of the wreck.

At a depth of 17 metres it was an easy dive, and in about ½ hour, I was able to explore the entire wreck. It was a relatively small wreck and I took note of key features and photographed them for later reference. Back home, I started doing research, attempting to unravel the identity of this mystery wreck. After pouring through navigational maps and historical archives, I came across a reference to a ship that had sunk just 500 metres off the wreck I had just dived. The ship was namedthe Lady McCallum! I immediately called Lal to ascertain if there were any other ships in the vicinity and he gave his assurance that there was none. Following up on this promising lead I did further research and, based on matching features of the ship to the wreck and also considering the close proximity of the wreck to the last known location of the Lady McCallum, I was able to, with reasonable certainty, conclude that this was indeed the wreck of the Lady MaCallum.

The proof came a few years later, when during a dive organized by the Sri Lanka Sub-Aqua Club, a club fellow diver Yohan Abeysekera found a fork amidst the debris within the wreck. He cleaned it up to discover the inscription ‘C.S.S.C’, the initials for the Ceylon Steam Ship Company, on the handle of the fork!

Thus, all doubts were laid to rest.