The flamboyance of flamingos

The flamboyance of flamingos 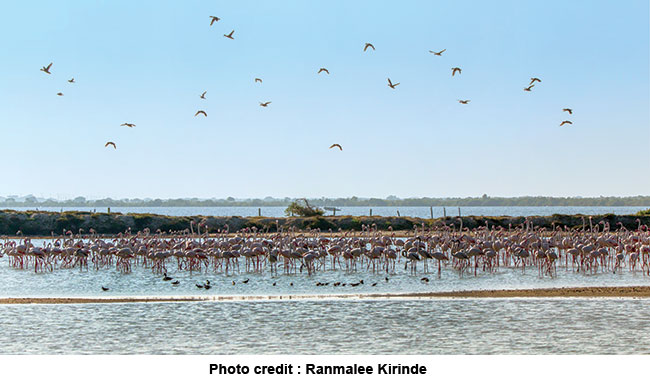 The months of February, March and April are an exciting time for bird watchers as it is the period during which the Greater Flamingos (Phoenicopterus rosues) in their thousands flock to the salterns in the Mannar area in the North. The salterns become a sea of pink as these migratory birds make the area their temporary abode. The attraction for the birds is the ample supply they have of crustaceans and mollusks found in the salterns that make for a delicacy for these birds.

The best time to watch the birds is around sunrise when the large flock is a feast for the eyes. As much as 5000 birds have been recorded at times in this area where the land is low, just a few meters above the sea level with a very dry climate. This area is also well known for the large amount of donkeys.

There are six different species of flamingos of which the Greater Flamingo is the most widespread and common member of the flamingo family. These birds have an attractive colouration and appearance with pinkish/white feathers with the wing covers red and the primary and secondary flight feathers black. They have long pink bills with a black tip, yellow eyes and long pink legs. The male is bigger than the female. 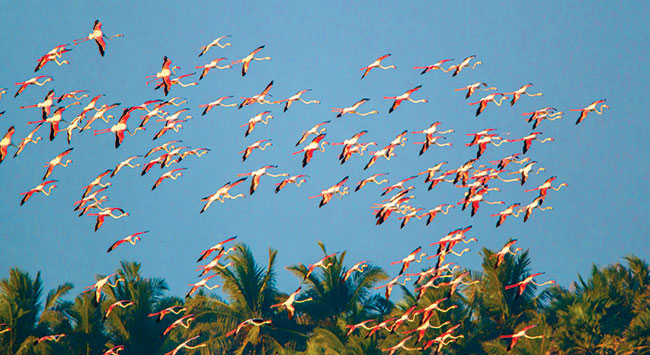 The Greater Flamingo is seen regularly in Africa, the Middle East, Southern Europe and the Indian subcontinent. They have a preference for relatively shallow water bodies and hence saline lagoons, saltern areas being the greatest attraction for them.

According to the International Union for Conservation of Nature (IUCN) Red List, the overall population of Greater Flamingo is increasing and estimated at 550,000-680,000 birds.

Each year, as the Greater Flamingo, a common winter-visitor to Sri Lanka gathers in Mannar. It is also the time that birdwatchers and wildlife photographers flock to the northern regions to get a glimpse of the spectacular gathering which is an unforgettable experience.