Sri Lanka Navy Ship Jayasagara that sailed along every nautical mile around Sri Lanka from North of Talaimannar passing Great Bases reef and up to south of Talaimannar was decommissioned recently, evoking nostalgia in many sailors who boarded her

Even though the suggestion of decommissioning SLNS Jayasagara was on the agenda of many Board of Management meetings held at Naval Headquarters in the past, it never materialized probably due to the nostalgia of some of the decision making members. Instead of decommissioning, it was suggested to assign her to Naval and Maritime Academy as the training ship to facilitate actual sea exposure to both Officer and Sailor under trainees or to utilize her exclusively as a Search and Rescue vessel to assist fishermen in distress out at sea.

However, the news of decommissioning her on September 30th  certainly brought clouds over me as that hinted the end of her service to the  nation which she did without any reservation or hesitation close to four decades. I wondered what her fate would be as this aging dame is not the kind that easily gives up. It was announced later that the Sri Lanka Coast Guard would soon be her new abode. 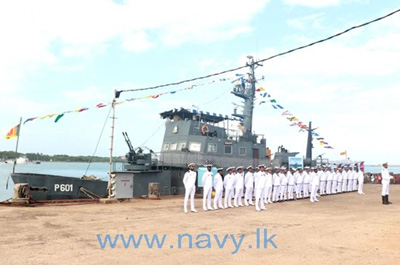 The best of the inventory with the Sri Lanka Navy (SLN) in the early 80’s were the Chinese Shanghai class gunboats and they were the SHIPS. The gift from then USSR,  SLNS Samudradevi was tied up to the jetty and I cannot recall a day that I saw her out at sea since my cadet time. The necessity of having much capable vessels that could operate at longer distances from shore and for extended periods giving due weightage to ergonomics was much felt by SLN.

Having built Long Patrol Boats (LPB’s) for SLN, Colombo  DockYard Ltd. (CDL)  was keen to show off its capabilities of building much larger vessels for SLN. Accordingly,  CDL was awarded the contract of building two OPV’s (OffShore Patrol  Vessel ) of 39.8 meters of length and displacement of 330 tons. It was 9th December 1983- the first of two CDL built craft having pennant number P601 commissioned as SLNS Jayasagara and the other was commissioned as SLNS Sagarawardena subsequently. I am yet to understand why the vessels were commissioned as Jayasagara and Sagarawardena. The commissioning warrants were signed by the President of Sri Lanka J. R Jayewardena who was also the Commander – in – Chief of the Defence Forces. Point to ponder is when both the names are written side by side; like Jayasagara Sagarawardena and cut off the common denominator word ‘Sagara’, you end up with the word ‘Jayawardena.’ Ironically the first commanding officer of SLNS Jayasagara was also a Jayawardena- Commander A.I Jayawardena!

Decommissioning Pennant is being scissored to equal parts

It was Commander F. Mohomed  who was at the helm of Jayasagara when I boarded her for my midshipmen’s sea training attachment. The year was 1986. Life onboard Jayasagara was a world apart from that of a Chinese gun boat on which I along with my batch mates had our cadet time sea training. Jayasagara had air conditioned accommodation whereas the air we breathe on gunboats was mixed with engine exhaust, carbon partials and salt spray and entered through the portholes fitted with wind scoops.

The food was cooked on electric stoves in the galley of Jayasagara instead of diesel fuel fired stoves which had authentic diesel-flavored food of the gun boats. The engine room was specious and running MAN main engines emitted rhythmic low noise instead of campy sweating engine rooms of gun boats filled with main engines and auxiliaries screaming at high pitch, piercing ear drums at high RPMs. State of the art (at that time) high power communication equipment eased up the task of communicators ( signalmen of Navy) when passing signals back and forth when operating from greater distances from shore instead of communicators of Shanghai’s praying to god that someone out there would hear his cry. The cathodic  protection system that was fitted reduced rust coming up hence eliminating the need of constant painting of decks.

I was compelled to believe the rumor that CDL had designed the hull of  Jayasagara  based on a harbour tug after serving a tenure onboard. That may be the reason for almost all newcomers onboard getting sea sick during their initial sea patrol. I am sure even Captain Jack Sparrow of Pirates of Caribbean would not have been spared by Jayasagara feeding the fish if he got onboard.

Until the arrival of SLNS Sayura, a much larger and a proper OPV, Jayasagara was the flagship of SLN  and had even visited Malaysia and Andaman and Nicobar ports to participate in international naval exercises. She had sailed along every nautical mile around Sri Lanka from North of Talaimannar passing Great Bases reef and upto south of Talaimannar except crossing the sand dunes of Adam’s Bridge.

She was a formidable enough lady in 1980’s to counter LTTE sea tigers having twin barrel 25mm guns at forecastle and quarter deck (front and rear) but, subsequent sophistication of LTTE tactics and assets, utilizing Jayasagara effectively  to engage the enemy became somewhat a debatable issue as  SLNS Sagarawardena– her sister, was attacked by LTTE suicidal divers off South of Mannar and settled down at Davy Jones’s locker along with few brave officers and sailors.

During her heyday, she was mainly based at Trincomalee and only at the latter part of her naval life, Galle became her home port. The decommissioning ceremony of Jayasagara was conducted at Trincomalee. The lengthy white  decommissioning pennant equal to her length (40m) flown at the masthead was lowered in presence of the Commander of the Navy and scissored into equal lengths and distributed among all the crew members.

I sincerely wish that a piece  of white bunting  is kept not at the most prominent place of the home of each crew member who served onboard her but in his heart, tagged with all the memories.

I will not say ‘So Long’ to you as I know Coast Guard boys will cherish you for many more years and you certainly will rock them as you did us! 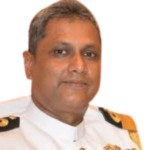 A great article of SLNS Jayesagara.

යකාගෙ හැටියට තමයි විමානෙ.. What is not wrong today that the country is reversing every side, why not the ship decom and sell for iron or let sunk