The Bandula that I knew

The Bandula that I knew

It seems a life time ago, but, as a young cricketer playing Under-14 cricket for Ananda College Colombo, my memory is etched like it was done on stone. It was the Under-14 Ananda-Nalanda match and we were confronted against the proposition of containing their captain Bandula Warnapura who by then had built-up the reputation of being a future star even at that tender age.

Anyway, we did not let Bandula get out of hand as my other new ball partner H.D.K. Subash got him out cheaply and owing to the time allocation the match was pronounced as a draw. Reason, the Under-16 match was to follow in the evening session.

The Under-16 match was rather one-sided. Warnapura who was also a member of the Under-16 team that day scored an unbeaten knock of 80 and guided Nalanda to victory. By the end of that season Bandula was a regular in the Nalanda College First Xl team.

As a matter of fact, all three brothers Sarath Fernando, Upali Warnapura and Bandula Warnapura migrated from St. Peters – Sarath and Upali the two seniors joining Ananda and Bandula moving to Nalanda. Sarath and Upali also were cricketers at Ananda College. In later years Upali’s son Malinda became the second Warnapura to represent country in cricket.

All Bandula’s peers at Nalanda knew that he would play for his country one day but the question was how soon. Bandula captained Nalanda in 1971 and in the next year in 1972 he broke the 44-year-old big match batting record held by Anandian P.M. Jayatilleke (111 not out) when he ended-up on 118 not out.

It was an era where cricket was not a lucrative livelihood. If you intend indulging in it, you have to spend your own bus fare for practices and only a selected few had vehicles or motorcycles. Of course, there were a few companies who employed the top cricketers like the Maharajah Organisation, Wellawatte Weaving Mills, Ceylon Tobacco to name a few.  The top clubs were the SSC, NCC, CCC, BRC, Nomads, Colts, Tamil Union and the Bloomfield feeding the lifeline to national cricket in a very tightly packed division-one club cricket tournament.

After leaving school, Bandula joined the Bloomfield C and AC for his senior cricket career and under the influence of Shelley Wickremasinghe, was initially employed at the Wellawatte Spinning and Weaving Mills along with a host of top club cricketers. Later he moved to Ceylon Tobacco.

A match that most Lankans would have forgotten is the match against the Malaysian Cricket Association in 1972 where Sri Lanka beat the hosts by an innings and 483 runs. There Sri Lanka scored an imposing 738/4 declared where former Ceylon captain Anura Tennekoon (221) and Bandula Warnapura (294) put on a massive 426 run stand for the second wicket. In reality Sri Lanka was not used to accumulations of that nature before.

Bandula first represented in a fully recognised cricket international when he became a member of the inaugural ICC Limited overs World Cup in 1975. Then he stepped into the big seat as the national captain in 1979 when the regular captain Anura Tennekoon was indisposed and got the opportunity of captaining the country against India.

The Indian team under Srinivas Venkataraghavan was a star-studded entity with players in the caliber of Kapil Dev, Sunil Gavaskar, Dilip Vengsarkar,   Gundappa Visvanath and more.

Sri Lanka batting first scored 238 for 5 in 60 overs with Bandula making a contribution of 18 runs at the top of the order followed by half centuries by Sunil Wettimuny (67) Roy Dias (50) and Duleep Mendis (64). 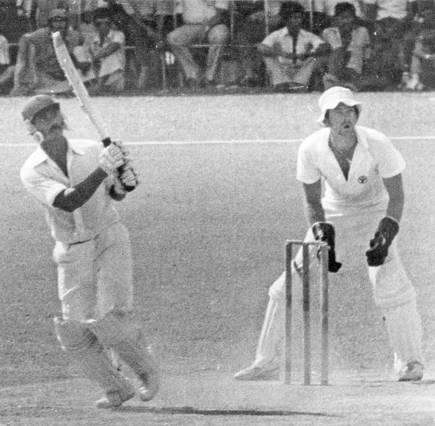 India in their turn were all out for 194 with fast bowler Tony Opatha (3 for 31), Somachandra de Silva (3 for 29) while Bandula bagged one wicket for 47 runs in his twelve overs.

Sri Lanka had drawn first blood in international cricket even before they received status. It was in Manchester, England, in 16 June 1979.

Also in 1979 Australia was on a tour to Sri Lanka to test their worthiness to be in the big league and it was a one-day international captained by Kim Hughes. In that game Australia were all out for 188 runs and Sri Lanka scored 189 for 4 with Bandula Warnapura scoring a blistering 106 and putting on an opening stand of 170 runs with Sidath Wettimuny for the first wicket.

When the big day came Warnapura was not only Sri Lanka’s first Test captain against England in 1982, but the first player to score a Test run for the country. 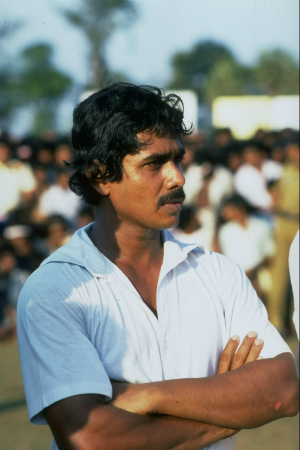 The rebel that he was

A person who has the spunk to call a spade a spade, Bandula always spoke his mind out. He was not afraid to speak his mind out even against the authorities. Not many talks about a topic surfaced prior to the inaugural Test. The Lankan cricket authority wanted to include leg spinner D.S. de Silva in the team, but de Silva indicated that he be provided with hotel accommodation and travel facilities. Bandula, even as captain had to travel from his residence for the match. Bandula argued that he was not against D.S. de Silva being a member of the team, but, if he was being afforded with hotel accommodation, so should the rest of the playing squad.

Most of the insiders felt that was the beginning of the rift that ultimately ended up with Sri Lanka making a rebel tour of South Africa a few years later. At the same time, it was Bandula who took a journalist to the Press Council during Sri Lanka test tour of Pakistan also in 1982.

He made his ODI debut against the West Indies at the 1975 World Cup, and in the same tournament, he scored a memorable 39-ball 31 against an Australian attack led by Jeff Thomson and Dennis Lillee. His sole international half-century came in 1982 in an ODI against Pakistan in Karachi, a 98-ball 77 in a losing cause. He was also a useful right-arm medium pacer picking up eight wickets in ODIs and has the distinction of being one of the few players to have both opened the bowling and the batting in the same Test.

Warnapura, played 12 ODIs and four Tests in an international career spanning seven years from 1975-1982. He captained the side in each of his Tests and eight ODIs, including Sri Lanka’s maiden Test in 1982 against England. His 38, while opening the batting in the second innings of that game, would remain his highest Test score.

Bandula was castigated as a rebel after his tour of South Africa and was banned by the authorities for 25 years. Upon his return to cricket, worked as an ICC match referee and an umpire, and was also a certified cricketing coach. He served as the coach for the Sri Lanka national cricket team before he was appointed Director of Coaching in 1994. He became Director of Operations of Sri Lanka Cricket in 2001. He functioned in that post for eight years before he resigned in 2008. He was the Development Manager of the Asian Cricket Council. He has also refereed two Tests and three ODIs in 2001.

In his latter stages, he fought for what is right in cricket and was a vehement critic of the present cricket administration which he was going to contest against. But he was more than disillusioned by the bigger picture and pulled out of the race and that was it.

S.R. Pathiravithana is an award-winning senior Sports Journalist who had served several leading Sri Lankan national newspapers as the  Sports Editor and is presently with the National Olympic Committee, Sri Lanka as Head of Media.