The Rahu Walaha or Red Bear of Sri Lanka- extinct or alive?

The Rahu Walaha or Red Bear of Sri Lanka- extinct or alive?

The word ‘Bear ‘in Sri Lanka is associated with none other than the images of the menacing or rather innocent looks of the ‘sloth bear (melursus ursinus inornatus) which inhabits the low country dry zone forest of the country. The Sri Lankan Sloth Bear is considered to be a subspecies of the Sloth Bear found in the Indian Subcontinent. There are only 8 living species of bear in this world today, and are spread in four continents.

In this backdrop it is interesting to ask if anyone has ever heard of another bear species that is said to have inhabited this island.

The chances of the Red Bear or Rahu Walaha (also referred to as Waga Walaha) of Sri Lanka being fiction or legend is open to debate. The old Vedda stories and the colonial writers who speak of events spanning a few centuries ago, has tales of a species of Red Bear which roamed the dry zone forest of the island. It is said to be a bear which is reddish brown in colour with sharp curved claws and shaggy hair. The renowned surgeon Dr. R.L. Spittel gives a vivid description of the tales he had heard of this legendary creature, though not seen by him.

Roman and Arab merchants who visited the island several centuries ago speak of a smaller species of bear, red in colour, in Seilan. The preferred version by Dr. Spittel is that this is a case of mistaken identity with a mix up with the  legendary Nittaewo  a humanoid creature, with reddish brown hair and standing between 3 ½ to 4 feet tall which is also alleged to have inhabited the thick forests of the country. But the encouraging fact remains that either one of the legends should be true, namely the Rahu Walaha or the Nittaewo, because both speak of a creature of similar appearance and the chances of both creatures being non-existent, is not logical. 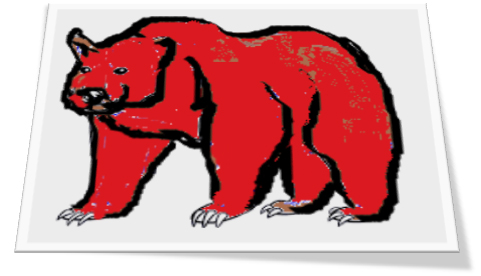 Red Bear as illustrated by the author

From the written accounts of history, one of the earliest references to the Rahu Walaha is made by Thomas Pennant in his book Artic Zoology which speaks of a Brown Bear in Ceylon. This book was published in 1784. Robert Percival in his work, An account of Island of Ceylon published in 1803, while speaking of the Sloth Bear, also mentions of a species of Hyena-like creature. It’s understood that the Striped Hyena Species, found in the Indian mainland is not found in Sri Lanka and hence the size would match the Rahu Walaha, which is smaller in size in comparison to the Sloth Bear.

Then there are the diaries maintained by the Government Agents which refer to a pelt of a reddish brown bear which was recovered from Trincomalee way back in the mid-1850s. The next viable reference is from Hugh Neville, of the Ceylon Civil Service. He refers to a brown bear in Ceylon in his journal Tabrobania and speaks of a specimen found in Trincomalee District which was alive when found. Interestingly, he also refers to a skull of a bear found in Ceylon and taken to the Paris Museum which was analyzed by an expert and concluded to be a species of Tibetan or Malayan bear. Hugh Neville says the Red Bear was very rarely found in the south eastern jungles of Sri Lanka. He refers to it as the Rahu Walaha and describes the creature to have reddish/brown hair with pale colour pattern on the chest. None of these versions speak of the bear having the signature white marking on the chest of the Ceylon Sloth bear. Hence the idea that these specimens were merely colour variations of the Sloth Bear could be safely disregarded.

W.T. Blanford in his journal, The fauna of British India, Ceylon and Burma published in 1888, speaks of a Red/Brown bear which might have spread as far as Ceylon and identifies it to be Himalayan Red Bear. T.B.Fry in his journal Bombay Natural History Society Mammal Survey of India, Ceylon and Burma, Report 46 of 1925, mentions that there was a variety of Sloth Bear which was reddish brown in colour. H.Parker in his journal, Ancient Ceylon – An account of aborigines and part of early civilization, speaks of the Veddas encountering the Ursus Labiatus or Asian Bear in the forests of Ceylon.

The most dependable account of the Rahu Walaha comes from the book, The Manual of the Mammals of Sri Lanka by W.W.A Phillips published in 1935. Major Phillips was a great Naturalist and was secretary of the Wild Life and Nature Protection Society from 1929 to 1940. This is by far one of the most comprehensive books published on the subject up to date. He states in his journal, “On one or two occasions a ‘red’ variety of this sloth bear has been shot in India and a similar variety has been met with in Sri Lanka. One captured in the year 1856 is described as being ‘scarcely more than half the size of the Sloth-Bear and has a dark fur on the back but is tawny yellow beneath and on the chest’. This variety has been reported to be well known in the country East of Padawiya Tank, in the North Central Province, about the middle of the last century.”

I recently came across an internet source which states that an American Official who journeyed along the Mahaweli River in 1957 had mentioned that the area was considered to be the hunting grounds of the Rahu Walaha. However, this remains an unverified source. 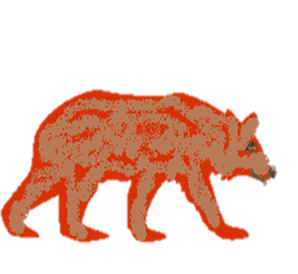 Interestingly there has been a recent surge of alleged sightings of the Nittaewo from various parts of the country, but there have been no photographs or videos to verify this. There have also been many tales of trackers at Yala, Kumana and Wilpattu claiming to have seen a bear-like creature which is reddish brown. My personal experience of such narrations came in the years 2010 and 2014. In 2010 when my wife, kids and I were spending three days at Buttawa bungalow, on one afternoon we were close to the Menik river and the old Yala bungalow when we came across a leopard and two cubs. While we were engrossed in their playful behaviour, my wife suddenly asked whether the Army Camp in the vicinity had any Golden Retrievers or Labradors and when I inquired why the sudden thought, she just casually mentioned that she saw a large dog-like creature which resembled the above breeds, strolling about 30 feet away from the vehicle and had entered the jungle. I dismissed the idea and said that it might have been a large Macque running on the ground. But my wife was convinced that she had seen a dog. When I inquired from the tracker whether there were dogs in the vicinity of the camp, he said that the only animal at the camp was the Brown Fish Owl which was reared by the Army Personal after it had injured its wings and was unable to fly. But he casually remarked that this was not the first time such a claim was made and said that several visitors including foreign nationals have made inquiries whether there are Labrador dogs in the area, after seeing such a creature. Since there was no explanation, we never gave much thought to the incident.

In 2014, when I was camping at Kalivillu campsite at Wilpattu, we met several Navy officers one afternoon it the Wellamundel area. While chatting with us, the two navy officers who had been on duty in the area for a long period, mentioned that they have seen a dark coloured leopard in broad daylight and swore it was sheer black in colour. We did not believe in them because at that time black leopards were almost forgotten in the country. Now I feel that it might have been a black leopard! More interestingly and not to be outdone, another navy officer informed us that on a couple of occasions they have come across a large dog-like animal reddish brown in colour and that on one occasion it had charged at them, without any provocation. 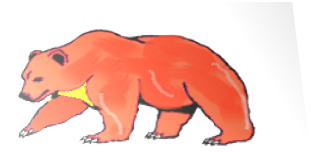 One aspect which concerns me is the lack of any hard evidence on the subject, especially a photograph or why the bones or skin has not been found after the isolated incident in Trincomalee in the 1850s. When it comes to the carcass or the bones, there is a possibility that even today if we are to come across the bones and the discoloured and decomposed skin, it might be dismissed as being the skull, bones and hair of a juvenile Sloth Bear, unless one knows and is mindful of the possible existence of another smaller species of red bear.

I have little or no doubt that the legendary Red Bear or Rahu Walaha had existed here at a certain point of time in history, especially based on the writings of the colonial writers whom we can consider to be credible. It could most probably have been similar to the Himalayan Red Bear, Tibetan Bear or the Sun Bear which could certainly have reached our shores and made this isle its home. As far as its present existence is concerned, it is quite the opposite. Nevertheless I am certain that the stories of the recent sightings are indeed that of this elusive creature. I feel it is time that there was a scientific study conducted on the Rahu Walaha or the Red Bear of Ceylon.
(Illustrations by the author) 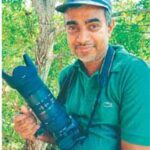 The writer is a lawyer by profession and also a wildlife photographer, a travel and a wildlife writer and a nature enthusiast.